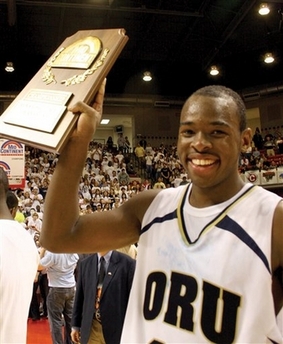 Eric Weiss
@DraftExpress
This was definitely Greens best showing of the camp, but he didnt really quell many of the doubts scouts have about him as an NBA player, specifically in regards to his athleticism. Green did most of his damage very close to the basket in this game, as he uses his body very well to secure position, and once he gets close enough to the rim, he has a very nice touch with the basketball, which allowed him to score many lay-ups here. A few of his scores came from putting his body to work to carve out space, but he also had a turnaround jump hook from five feet out, an 8-foot jumper, a little face-up drive that he laid off the glass, and scored on some put-backs off offensive rebounds. Green also uses his body well on the boards, which is clearly evidenced by his 17 rebounds. He establishes good position, boxes out well, and goes up strong for the ball. Defensively, Green has some troubles, specifically against more agile, perimeter-oriented power forwards, but that wasnt really an issue in this game, as he had a favorable matchup against Rashad-Jones Jennings, another bruiser.
Read full article

Eric Weiss
@DraftExpress
This was a stronger performance for Caleb Green that he had in the first day, settling into his role a little better and doing a good job showing off what he does best. Hes a strong player with great smarts and a nice all-around skill-set, and this helped him get a number of easy baskets around the basket off cuts or offensive rebounds. Green has played under the rim for the most part, lacking the athleticism that most of the other undersized power forwards bring to the table. He works as hard as anyone as his 14 rebound would tell you, but after watching him in person we have some pretty serious doubts about whether he has what it takes to make it in the NBA, particularly on the defensive end.
Read full article

Joey Whelan
@DraftExpress
The NCAAs active career leading scorer hit his first shot attempt of the NCAA Tournament; but it was all pretty much downhill from there for Caleb Green. The three-time Mid-Con Player of the Year never got going offensively and Oral Roberts fell to Washington St. 70-54.

Green, who had already posted impressive numbers this season against Kansas and Arkansas, wasnt a factor in the first half, scoring just 5 points on 2-8 shooting. The Cougars frustrated the senior by sending a constant wave of double teams at him every time he was fed the ball in the post. A few times he did find open teammates, picking up a few assists, but as a player used to scoring at will, Green forced a lot of tough shots.

Things improved slightly in the second half as Green was left alone in single coverage situations more often, but he never got his shots to drop. Several of his shots were blocked by the stellar defensive combination of Ivory Clark and Aaron Baynes, who never let Green get a good look at the basket. A few times he tried stepping out and driving to the basket, picking up a few trips to the foul line in the process, but he insisted on trying to score from the block.

Rebounding, usually a strength for Green, was also not visible during the course of the game. Despite pulling down 8 rebounds, just one off his average, he was pushed around physically under the boards all game by Washington St.s front court players.

For Green, a player who was probably a late second round pick at best, this was a huge chance to solidify his chances of playing at the next level. After having such a sub-par performance, especially against a Washington St. team not known for its dominant interior play, Green will have to really impress the scouts at Portsmouth and private workouts if he wants to hear his name called on draft day.
Read full article

Joey Whelan
@DraftExpress
The 3-time Mid-Con player of the year seems to have a knack for putting on a show whenever his team is on national television, something that for Oral Roberts sake will hopefully extend to their first round matchup on Thursday with #3 seed Washington State.

The first time we saw Green this year, he registered possibly the most impressive overall performance of his phenomenal four year career, beating Kansas on the road while putting up 20 points, 11 rebounds, 8 assists and 5 steals. He also hit 2 of his 3 attempts from behind the arc, which ended up registering for 33% of his made 3-pointers on the year. The next time Green was on TV, it was on the road against Arkansas, in a close game that got away from Oral Roberts midway through the second half. Green had 23 points, 15 rebounds and 3 steals in that game, shooting 0-1 from behind the arc. And in this last showing, Green was playing in what could have been the last game of his career, going up against Oakland in the Mid-Con Championship. He showed up in a big way for his team with 28 points and 9 rebounds, while knocking down 3 of his 5 attempts from behind the arc, accounting for another 50% of his made baskets from that range on the year.

At the end of the day, Green is an upgraded version of your classic 4-year, undersized mid-major power forward. He doesnt have great size (6-8 might be stretching it), nor is he a great athlete, but he just knows how to get the job done, to the tune of nearly 2500 points in his career. He does it with superb versatility, being able to score equally as effectively with his back to the basket as he is facing the basket. He is extremely smart and a superb passer as you may have guessed by the 8 assists he dropped on the Jayhawks earlier this year, even if he has to be a little more selfish than he would probably prefer due to his extremely important role on Oral Roberts.

In the post, Green has an unorthodox jump-hook shot that he can throw in the basket with superb touch from anywhere within a 12 foot radius around the hoop. If his man takes away that move, hell gladly go to his secondary option, his turnaround jumper, or his third, a reverse pivot move that he executes with beautiful footwork. Not particularly quick, nor explosive, he uses his body intelligently to set himself up for fakes and crafty spin-moves to give himself a chance to put the ball on the rimin which case it normally drops thanks to his terrific feel.

Facing the basket, Green is a very good ball-handler for a power forward. He likes to create mismatches and put pressure on the defense by taking his man out to the perimeter and then finding angles to make his way to the hoop off the dribble. This helps him get to the free throw line at a near-incredible rate, just under 11 times per game. That stat puts him in first place in that category amongst the 500+ NBA draft prospects in our database, and not by small margin.

As a rebounder, Green is also amongst some of the best rebounders in this draft class, pulling down 9.3 per game, despite his average size and athleticism. That tells you a lot about his great hands, timing and positioning, as well as the tenacity in which he plays in.

Defensively, its very hard to gauge him accurately, due to the fact that he just doesnt seem to do anything except keep his arms in the air in order to stay out of foul trouble. Oral Roberts needs him on the floor for as many minutes as he can handle, and getting in foul trouble or being worn down by chasing players around screens is simply not an option for them. With that said, its not hard to tell that his lateral quickness is average at best, and thats where many of the question marks about his pro potential really start to emergethe position hell hypothetically defend at the next level.

Green has the body type of a power forward, despite likely being somewhere around 6-7, and would seemingly benefit greatly by shedding 10-15 pounds before he fully engages himself in the NBA draft workout process. Improving his shooting mechanics is also a must, possessing a fairly ugly, deliberate flat-footed stroke that is just not going to fly on the wing in the NBA. Despite shooting 5/9 from 3-point range in the three games we saw of his this year, he was only 1/8 in the other 30 games we didnt, which tells us a lot more about his perimeter shooting ability.

All in all, despite his flaws, Green is the type of player a team could certainly fall in love with at some point of the draft process. His game is somewhat similar to that of Ryan Gomes, and his intangibles appear to be just as strong. Being an undersized power forward isnt the curse it used to be a few years ago as Gomes and guys like Craig Smith can tell you, so Green will have a chance to stick if he plays well in as many NBA settings as he can, including Portsmouth, the NBA pre-draft camp, summer league and training camp, if hes to make it that far. If he doesnt, a six figure contract in Europe awaits him at virtually anytime, as his game is absolutely tailor made to that style of play.
Read full article