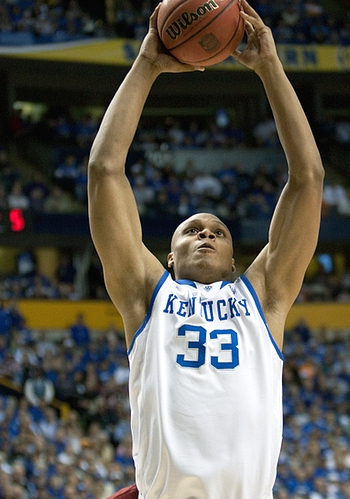 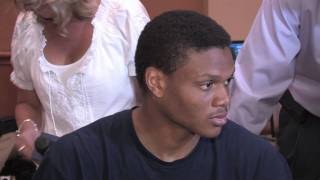 Jonathan Givony
@DraftExpress
Daniel Orton's measurements are nearly identical at 6-8 ¾ without shoes, with a 7-4 ¼ wingspan. Add in the fact that he's 269 pounds and he clearly has the dimensions of a NBA center. He does need to work on his 13.8% body fat percentage though.
Read full article

Landry Fields
@DraftExpress
Daniel Orton, if you havent played against him, is solid. Many people, and by people I mean crowds who think they know basketball, but truly dont, only look at his numbers this year and try to judge based off of that. Well after playing him, good for him for leaving. While I think next year he would kill for Callipari, he was solid against us.

I remember a play in particular where I got past my defender on the wing and saw Daniel Orton at the basket. Ok, its a televised game, lots of people are watching, if I go hard enough Ill at least get fouled. Nope. I took one last dribble after getting by my defender and decided I wanted to dunk on Orton, but he gladly rejected my request. He had a presence all game in the paint, which made me have to alter a few shots when I got into the lane. Hes big and a great secondary helper for them. I actually like him a lot. Any team would have loved to have him this year, I know we would have.
Read full article

After averaging just 3 points and 3 rebounds per game, few Kentucky fans expected to see the name of Daniel Orton pop up in NBA draft conversations. Thats exactly what appears to be happening though, as it seems inevitable at this point that Orton will enter his name in the draft and keep it in if he likes what hes hearing. Whether or not hes making a mistake is something that we wont be able to judge for a few years, but there is no questioning the fact that Ortons is a very legitimate NBA prospect, either now or down the road.

The main intrigue around Ortons potential as an NBA player revolves around his physical tools. Standing 6-10, with a wide, chiseled frame, an excellent wingspan and above average athleticism, Orton passes the look test and then some for what NBA teams seek from at a player at his position. He is fairly nimble, runs the court competently, can get off his feet, has a solid second bounce and very good hands on top of that. Simply put, there just arent many players around like him, which makes him somewhat of a commodity even in a draft as deep as this one is with big men.

Offensively, Orton was mostly a non-factor for Kentucky this season, reaching double figures in just two of 38 games and averaging an unimpressive 9.8 points per-40 minutes pace adjusted. He rarely touched the ball when out on the floor, being mostly relegated to running the court, crashing the offensive glass and finishing whatever scraps came his way from the multitude of stars Kentucky assembled this year.

Nevertheless, he dropped some small but intriguing glimpses of potential from time to time, particularly as the season moved on and his comfort level seemingly increased. Orton can carve out space in the post with his huge frame, create shots for himself with some interesting spin moves, shows very nice touch around the basket, and finishes extremely well at the rim thanks to his outstanding length and strength. He even stepped outside on rare occasions and knocked down a 15-foot jumper, displaying solid mechanics in the process. While he didnt do any of this on a consistent basis, for a variety of reasons, it would not be accurate to say that hes completely clueless offensively at this point in time.

With that said, Orton still has a long ways to go on this end, as his skill-level is unpolished and his decision making can be extremely pooroften looking like he cant wait to shoot the ball as soon it reached his hand, and throwing up some very questionable looks in turn. While he gets to the line at a decent rate, he only converts 53% of his attempts once there, showing that he still has plenty of room for improvement with this part of his game. He has no left hand, is a poor ball-handler and lacks considerable experience on this end of the floor. He doesnt quite know how to use his body as effectively as he possibly could, and doesnt always show the type of toughness and intensity you look for from a player fighting for minutes on a crowded roster.

As a rebounder, Orton is mostly a mixed bag, on one hand showing terrific potential with his length ability to go well out of his area for loose balls, particularly when crashing the offensive glass. He was responsible for a number of extremely impressive put-back dunks over the course of the year, but all in all measures out as just an average rebounder from a statistical standpoint, failing to pull down even 10 boards per-40 minutes pace adjusted. Considering his paltry offensive role, this is difficult to understand, although the extremely small sample size (502 minutes) may have something to do with that.

Defensively, Orton makes a huge impact at the collegiate level simply by stepping out on the court. His wide base and terrific strength makes him extremely difficult to back down in the paint, and he does an excellent job using his extremely long arms to contest shots and get his fair share of blocks.

Orton averaged a solid 4 blocks per-40 minutes pace adjusted, and while hes not what you would call a high flyer, he shows nice patience and fundamentals for a player his age and should be able to develop even further in this area as he gains experience.

He also does a nice job sticking his long arms in the right place and coming up with steals, although he has a tendency to gamble at times excessively and pick up cheap fouls by swiping at the ball unnecessarily. Hell also bite on the occasional pump-fake and give up too much space in the post thinking hell be able to recover with a spectacular block, but nothing more than you would expect from a 19-year old big man.

A place he does tend to struggle is guarding the perimeter, though, especially on the pick and roll after caught defending guards and wings on a switch. Ortons lateral quickness is simply not good enough to stay in front of smaller players taking him off the dribblealthough his lack of experience doesnt help him much either-- and the limitations he shows in this area makes it pretty clear that his future is pretty much strictly at the 5-spot down the road.

Perhaps more worrying is the recent behind the scenes chatter about potential off-court concerns. The fingerprints of Ortons father were all over his every move on the recruiting trail, in reported heated discussions with Kentuckys coaching staff about his inconsistent playing time throughout the season, and now regarding his draft declaration decision, to the point that some wonder whether this could become a distraction for the team that picks him down the road. While Orton certainly comes off as a thoughtful and intelligent young man, teams will need to study these issues and draw their own conclusions, especially since hes such a work in progress that will only be able to reach his full potential down the road if hes fully dialed into the task.

Orton probably isnt ready to see very many minutes in the NBA in the short-term, but the physical tools he displays combined with his budding skill-set as a defender, rebounder and low-post threat make him one of the more intriguing long-term big men prospects in this draft. Whichever team picks him will have to be very patient with him, but he certainly has the potential to make them look very smart down the road. Backup NBA centers are expensive and hard to come by, and if Orton can develop as expected, he could be a very nice asset for a team to have, especially on a cheap 4-year rookie scale contract.

The main question teams will want to figure out in the workout process is-- just how far off he is from contributing at this point?
Read full article

Joseph Treutlein
@DraftExpress
Daniel Orton may not have been overly productive in the three days we saw him, but its pretty obvious that he will be quite a force in college once he gets his feet underneath him. Orton has an NBA body and a tremendous wingspan, although hes not what you could consider a tremendous athlete. He likes to play inside, though and is more than capable of making his presence felt down there, even if he needs to work on his footwork and all-around post-game. He stepped out and knocked down a mid-range jumper on one occasion, but its not clear that this is a consistent part of his offensive arsenal just yet. Defensively, he has the strength and length to be a factor at this level around the basketmore than that, well have to wait and see.
Read full article