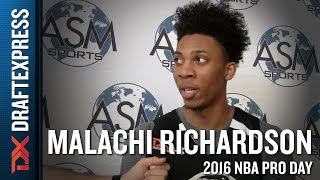 The #29 recruit in the 2015 high school class according to the RSCI, Malachi Richardson had a successful freshman regular season, being named to the ACC All-Rookie Team. He really took off in the NCAA Tournament, though, scoring 21 points against Dayton in opening round, and stringing together another 21 points in the second half alone in a memorable comeback victory over Virginia in the Elite Eight. Richardson's late-game heroics (including against Gonzaga in the Elite 8) played a huge role in Syracuse's improbable run to the Final Four, being one of four double-digit seeds to accomplish that feat in NCAA Tournament history.

Richardson has ideal height and length for a NBA wing player, measured a hair over 6'6 in shoes, with a gigantic 7-foot wingspan, and a solid frame that should continue to fill out in time. He's just an average athlete, however, as he doesn't possess great quickness or explosiveness, which hampers him at times offensively as. That shows up most vividly in transition, where Richardson converted just 40% of his field goal attempts, ranking 325 of the 341 collegiate players with at least 90 possessions according to Synergy Sports Tech.


Nevertheless, Richardson shows impressive scoring prowess as both a shot-maker and shot-creator, as he's capable of putting the ball in the basket instinctually from all over the floor, making extremely difficult plays look easy.

Although quite streaky in terms of overall results (35% 3P%, 72% FT%), Richardson has compact mechanics and excellent balance in his lower body, shooting the ball smoothly with deep range and a fairly quick release. He can create separation impressively from defenders, stopping on a dime or using nifty footwork and sharp step-backs to rise over the defense and drill contested looks out of isolation situations. In catch and shoot situations, Richardson hops into his shot and releases the ball in one fluid motion, demonstrating great potential to develop into a dangerous perimeter threat if he can find a way to hone his shot-selection. If he can develop into the knockdown shooter his touch and talent throwing the ball in the basket indicates, there is no question he will have a long career in the NBA.

Taking advantage of the long leash afforded to him with extended minutes and a very short bench, Richardson attempted more shots off the dribble (124 attempts) than he did with his feet set (90 attempts) as a freshman, which led to some very inconsistent results.


Richardson's struggles are a combination of bad shot-selection in the mid-range area (where he hit just 24% of his 2-point jumpers), to go along with his difficulties finishing effectively inside the paint. His game is built heavily around taking and making contested shots, and he can be quite a ball-stopper at times, overdribbling and freezing out his teammates frequently, not really reacting to the defense, and deciding what shot he wants to take before he starts his move. This is a tough way of making a living, but when those contested jump-shots are falling, it can be extremely impressive. The problem is when they don't, he can shoot his team right out of games. The hope is he can learn how to better utilize his talent and figure out how to take advantage of his terrific scoring instincts in a more structured role under the tutelage of a strong NBA coaching staff.

He actually shows some promise utilizing jab-steps or subtle change of speeds and directions to get to the basket using his strong frame and long strides, as he can get low to the ground and has nice body control, and is extremely aggressive initiating and absorbing contact at the rim with nice toughness. He can attack an unbalanced defense off closeouts or quick actions, as well as create his own shot out of pick and roll or isolation situations, mixing in low crossovers with a powerful first step, helping him build up a full head of steam en route to the basket.

He just can't always finish what he creates, converting a very poor 46% of his inside the paint field goal attempts in the half-court, which is partially due to his inability to play above the rim and as well as his very poor shot-selection. He often drives right into the teeth of the defense without a plan, forcing up tough looks regardless of having a defender on his hip, after being unable to turn the corner on his initial move.

Richardson doesn't look to pass the ball often enough, but shows some potential in drive and dish situations when he actually does, averaging a decent 2.7 assists per-40. He looks for his own offense almost exclusively, but will surprise you at times with his ability to find teammates on the move. He's not as effective passing the ball from a standstill, though, often turning it over when he tries, which can lead to some bad body language, both from him and his teammates.

Defensively, Richardson has the tools to be very effective, as he moves his feet and covers ground well, using his exceptional length to contest shots on the perimeter and get in the passing lanes. He doesn't always play up to his full potential on this end of the floor, though, as his effort level comes and goes, and he has average awareness, gambling for steals wildly and committing some low IQ fouls. This isn't particularly rare for a freshman, though, and it seems he has the tools to be effective in this area as he learns how to be more solid in man to man settings, after playing zone exclusively at Syracuse.

Richardson is one of the more hotly debated prospects in this draft among NBA scouts, as opinions range wildly regarding where he should be picked. His supporters point to the difficulties all NBA teams are finding currently in acquiring shot-making wing players with length who can also create their own offense, and think their coaching staff can tone down the freshman's fearless style with their player development system. His detractors are turned off by his extreme inefficiency and poor all-around productivity (14.6 PER), wondering if he's athletic enough to play as selfishly as he often does. They'll also point to the fact that he is older than many of the sophomores expected to be drafted next month, and is only six months younger than one even junior in Damian Jones.

It will be very interesting to see how things play out.
Read full article

Jonathan Givony
@DraftExpress
Richardson is probably the most immediate prospect of the group, a well-built and athletic wing who loves to operate in one on one situations, but has seen mixed results when doing so in his debut campaign. Much older than your average freshman at 20 years old, Richardson can do quite a few things well, but has struggled with his decision making and efficiency this season, as does not possess a great feel for the game.
Read full article

DraftExpress
@DraftExpress
Malachi Richardson is a little undersized for a shooting guard at 6-3 ¼ in shoes, but his 7-0 wingspan more than makes up for that.
Read full article

Outlook: Streaky scorer who can get hot quickly and knock down a barrage of outside shots. Talented prospect missing a good amount of polish and experience. Reclassified and is now much older than most of his classmates. Will turn 20 during his freshman season in college.
Read full article