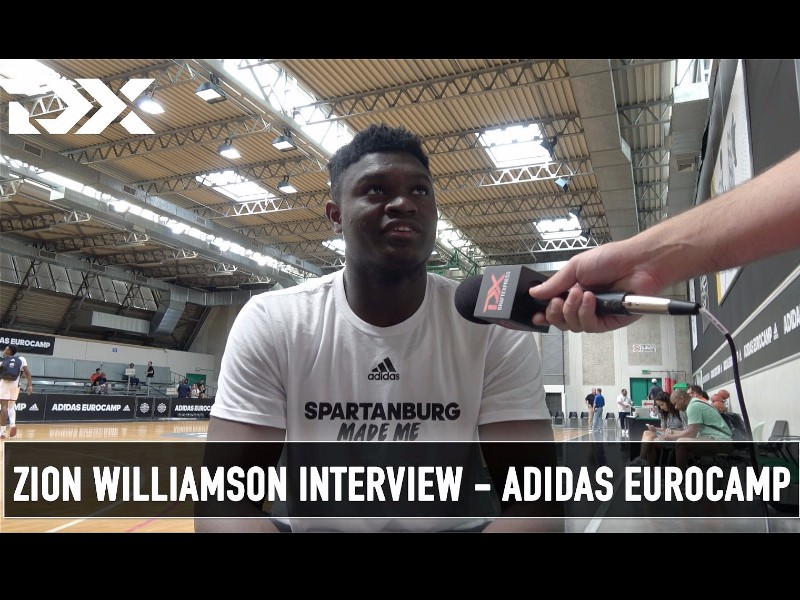 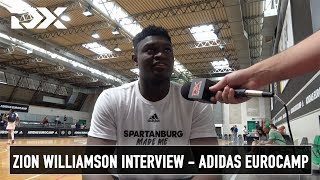 Jonathan Givony
@DraftExpress
Elite high school prospect Zion Williamson talks about his experience at the adidas EuroCamp, his background in basketball, dealing with the added attention he's received in the past year, and the type of player he is and wants to become.

Williamson is fresh off a state championship with Spartanburg Day in South Carolina, and has followed that up with a successful summer which included an MVP performance at the NBPA Top 100 camp, a productive 12 games on the Adidas Gauntlet circuit, and a strong showing at the adidas Nations camp. Williamson will be one of the most sought after recruits in the class of 2018, and has two years of high school basketball left to let his skill level catch up to his pure physical and athletic abilities. It will be interesting to see if he has another inch or two left of growth left, as he's somewhat caught between the forward positions at the moment at just 6'7.
Read full article

Playing 77 minutes over the course of just three games, Zion Williamson led the entire tournament in PER (40.1) despite having turned 16 just a month ago. Williamson scored nearly a point per minute (60 in 77) on outrageous efficiency (82% 2P%, 1-1 3P, 77% FT%), demonstrating advanced instincts for putting the ball in the basket. 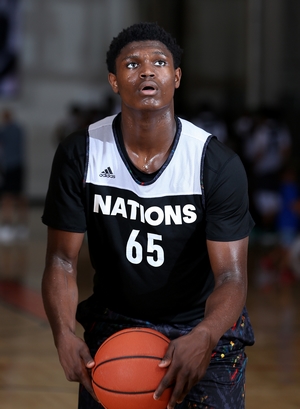 Very undersized at around 6'6 or 6'7, Williamson has long arms, big hands and a strong frame to compensate for his lack of height as a big man, and is more athletic than he appears on first glance. He is fluid, nimble and very quick off his feet, demonstrating outstanding body control that makes him very difficult for other players his age to handle when considering his strength and dexterity.

He's also fairly skilled, showing the ability to create his own shot from the perimeter with impressive footwork and ball-handling skills, making him a difficult matchup in one on one situations that most big men his age simply aren't accustomed to dealing with. He's a handful to deal with in the post as he's difficult to keep a body on, and will try to tear the rim down exploding off two feet if given the opportunity. He even shows some ability to knock down jump-shots off the dribble with solld form and touch, although he doesn't quite know his limitations in this area just yet, having a tendency to force the issue and freeze out his teammates at times. He's not a great passer on top of that, being extremely focused on trying to score almost every time he touches the ball. Left-handed, he wants to get back to his dominant hand almost at all costs, which can make him a little predictable at times with his moves.

Defensively, Williamson has some impressive instincts, being the type of player who is always around the ball thanks to his natural feel for the game, but doesn't show much interest in making his presence felt on this end of the floor at this stage. His intensity level is low, as he's usually standing straight up rather than trying to get into a fundamentally sound stance, and doesn't show any urgency in closing out on the perimeter or putting a body on opponents. This isn't rare for a player his age, but considering his lack of size, he'll need to put a better effort in to not emerge as a liability in this area down the road.

Only going into his junior year of high school, Williamson is still at a very early stage of his development, but shows a lot of promise offensively as evidenced by the gaudy scoring totals he produced against mostly older players. He's already heralded as one of the top prospects in his high school class, and did nothing to discourage that notion with his play at the adidas Nations. It will be interesting to see if he has another growth spurt left in him.
Read full article