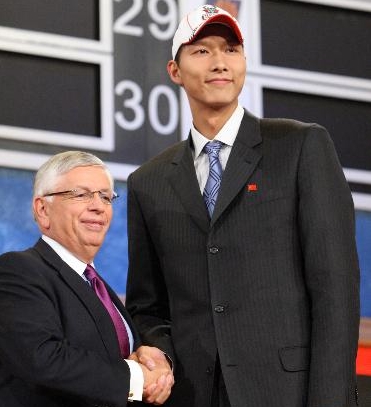 Luis Fernández
@DraftExpress
How should we appropriate the 2007 draft in the context of an increasingly globalized NBA? What can you expect from your teams international mystery picks? Lets take a look at what happened in the draft concerning international players, with a special focus on the first round nominees.

This years international class probably wont be remembered as one of the strongest around. A key factor to explain this circumstance was the very low amount of international early entrants. Only six players declared and didnt withdraw. Thats the shortest list since 2002 (only five early entrants that year, but the Tskitishvili pick boosted the amount to seventeen in the following draft). Actually in the last four years, the amount always reached double digits.

At least, the 1985 crop was slightly stronger than your typical international senior class, thanks to the likes of Tiago Splitter and Rudy Fernández, both well-established Euroleague players.

It all resulted in only one lottery pick, five first-round selections and a grand total of thirteen international picks in the whole draft. Very average figures that dont support a growing trend concerning international basketball in the NBA.

More than ever, this years draft has evidenced that the selection process for international players is not only about finding good players, but involves substantial economic and contract ramifications.

There has been as much talk about Yi Jianlians marketability as his playing abilities. Yis camp itself had a list of desired franchises and markets to land in. For a moment, you had the feeling that he wasnt really a player, but a product, and the NBA not a sport league but a business wait, it is a business, and Yi is a product after all. Refreshingly, it was a small non-Chinese-friendly market as Milwaukee the (apparently) final destination for Yi.

Still in the first round, the contract situation of players like Rudy Fernández and Tiago Splitter likely had a significant effect on their draft position. Concerns regarding their availability to sign for an NBA team probably scared away several teams, even if both are expected to join the League after only one more season. Still, in Rudys case, some monster European offer might come across his way to the NBA. It will be very interesting to see if he eventually follows the Vázquez route (to choose the European money over the NBA rookie contract), or whether Fran remains as an isolated accident.

On the other hand, what is usually perceived as a problem in the top-20, often becomes an attractive asset late in the first round or in the entire second round. Stashing international players overseas is a route to save money now and bet on the future, which ultimately might lead some franchise to artificially overrate some international player on its draft board. So ironically, the very same situation that could have ignited Rudy and Tiagos fall in the draft, might have also stopped it.

Its debatable whether this draft featured any single international super-prospect in the line of Bargnani, Yao or Gasol-, but if we had to give out that consideration to anyone, it could only possibly rest on the shoulders of the lone lottery pick coming from overseas this year, Yi Jianlian. Nobody else shared the kind of potential he brings to the table, and still he raises way too many doubts about his game to be considered at this point on the top class of all-time international draftees.

Our personal guess is that the Chinese sensation wont become a go-to guy in the NBA, a franchise player. He enjoys some certain potential in that regard, but doesnt seem to have the makings to transcend a complimentary role, as crucial as this role might become. Hes not a player you see taking over games, he suffers against physical competition, hes not always focused, and his skill repertoire is probably overrated at this point. Indeed, in his first years in the NBA you wont likely see much more than mid-range jumpers out of him on the offensive end. Besides, there are serious concerns about Yis defensive ability and competitiveness, which ultimately might jeopardize even his success as a contributor on an NBA team, although chances are he will likely be able to iron those issues to become a useful player.

The Bucks made a risky pick, thats for sure. Forget about Yis preferences for certain NBA markets and a possible trade demand (I dont see him pulling a Steve Francis); the main point here is whether Yi will be able to fulfill his potential. If we talk about money, just remember that as much marketability potential as a player might enjoy, its useless without a certain amount of success in the League.

The first round was completed with other four international selections: three somehow proven guys at the very top international competition and a very young kid coming from a very minor league. And still the equation turns out to be shaped by two likely steals and two question marks.

Its interesting to check how, despite the success of many foreign players in the past years, we can still identify international-friendly teams and franchises that wouldnt pick a foreign player to save their lives. Its in this part of the draft when this division becomes more obvious, as teams dont fear to miss the boat on any superstar, but still expect to find a useful player for their rosters. Certainly the Nellie commanded Warriors, the Blazers and the Spurs fit the international-friendly category.

The European traffic started with Marco Belinelli in the 18th spot selected by the Warriors. It was a little surprise to see the Italian shooting guard going so high after his disappointing last season, but he certainly enjoys enough talent for a mid-first round draftee. Still, his game style raises some doubts. He displays a notable ability to create his own shot, but his effectiveness in this regard has been pretty underwhelming last year. He wont be able to take as many shots as hes used to in Europe, and he should learn to maximize his scoring efforts, which means better shot selection and more emphasis on his passing game. Not a bad defender for European standards, still its clear that he wont make a living off that department, so how he figures out to make the most of his offensive talent will be crucial for his success.

Meanwhile, the Portland Trail Blazers scored what looks like a home-run picking Rudy Fernández at the 24th spot. Getting a rising European star so late in the first round, while adding the obvious Oden pick (and other interesting assets later in the draft), built an excellent second edition of back-to-back superb drafts. Rudy might not turn into a big star in this league; he doesnt enjoy the best one-on-one skills around, nor does he have a great ability to create his own shot, but hes a terrific team player to fill a third offensive option thriving within the offensive flow, with his athleticism, activity on court, perimeter stroke, passing skills and decision making. A steal deep in the twenties.

Its funny how the Blazers have built a greatly intriguing Spanish backcourt with Sergio Rodríguez and Rudy Fernández, buying both picks straight up from the Suns in consecutive drafts. The stingy behavior of the Arizona franchise doesnt look particularly smart. They are giving up the possibility of reinforcing the team through the draft in order to replace some of the expensive contracts that are strangling their payroll. Moreover, they also gave up the opportunity of stashing talented players overseas and bringing them whenever they enjoy a more affordable salary situation.

Moving ahead to the next team selecting an international player, everybody raves about the drafting ability of the San Antonio Spurs, but the truth is they hadnt scored decently in the draft since coming away with Luis Scola in 2002, and still it might end up becoming a wasted pick if they dont manage to bring him over. Of course, we are aware they always pick very late due their perennial success in the regular season, but constantly watching on court the likes of Tony Parker and Manu Ginobili, huge steals several years ago, tends to result misleading when judging what they have achieved lately in the draft.

Anyway, five years after the Scola pick, they have found another gem in the very same team Luis plays, actually selecting the very same guy that shares the frontcourt with Scola in the starting five, Tiago Splitter. The Brazilian will likely emerge, at the very least, as a useful role big man, a guy to provide energy and defense on a regular basis, but also some serious scoring potential from the low post, which is a superb outcome at the 28th spot.

Finally, much like they did with Joel Freeland last year, the Blazers took a flier on another unproven international player in Petteri Koponen with the last pick of the first round, to stash overseas. Although the Finnish point guard looks pretty well rounded and more intriguing than the English big man, we dont have enough elements of judgment to fairly evaluate this pick.

Once you hit the second round, its a miracle to find any sure things. This year was no exception, but still some picks look on paper more interesting than others. NBA teams did a nice job selecting early two of the most intriguing international guys remaining.

Kyrylo Fesenko is likely not the best player amongst the second round crop, and perhaps neither will he be in the long term, but hes probably the best suited to play a useful role in the near future. The Utah Jazz added a very active big man that should be able to provide energy, crash the boards, run the floor and take advantage of the teams offensive flow from the paint.

Right after the Ukrainian, the Indiana Pacers ended up selecting Stanko Barac, another intriguing big man, a long-term project to leave in Europe to develop. Perhaps a bit limited in terms of athleticism, Barac has the size and the skills to eventually emerge as a high quality frontcourt player.

Going through the second round, theres one guy whose relatively low position results noticeable. An extremely solid seven-foot center such as Marc Gasol looks like a very nice investment at the 48th spot by the Lakers. At this point he still doesnt enjoy much of a NBA-friendly profile, but if he keeps working on his conditioning and polishes his scoring abilities, he might end up being a steal.

This draft didnt render big surprises on the international front. With your logical variations, everything played out more or less as expected. Still, if we had to identify the most unexpected move, we would probably go all the way to the last pick in the second round, right where Milovan Rakovic was selected. You can argue that its hard to criticize the single last pick of the draft, but when a talented guy such as Zoran Erceg goes undrafted, its hard to understand why the Orlando Magic settled for such a limited player as Rakovic. Yes, hes strong, fairly big and somehow athletic, but hes a very mature player with little potential, a limited skill repertoire and an average feel for the game.
Read Next...