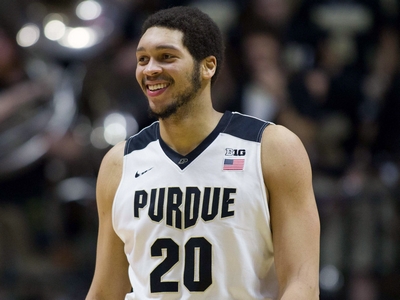 Few players over the years have been as enigmatic as Purdue big man A.J. Hammons.

With excellent 7-foot size, a strong frame, shot blocking instincts that made him a defensive force, touch around the basket, and a mid-range jump shot that always seemed to be on the verge of becoming realized, the soon to be 24-year old Hammons has been on the radar as a prospect ready to break out for quite some time.

Yet there always seemed to be something missing, something which prevented Hammons' impact from being quite as high as the sum of his parts. Whether it was his inconsistency on the defensive glass, his inability to turn that jump shot into a regular part of his offensive game, his irregular motor and lack of focus on and off the court, Hammons has never quite had the impact you expected him to.

Hammons took significant steps in that regard this season, as he was a more consistent, and well-rounded contributor for the Boilermakers in his final season at Purdue, helping head coach Matt Painter to a 26-win season, his best since the 2010-11 squad led by JaJuan Johnson and E'Twaun Moore. His season ended on somewhat of a disappointing note, though, with a first round NCAA Tournament loss to #12 seed Arkansas-Little Rock.

Hammons' intrigue as a prospect begins with his proficiency as a shot blocker. Hammons averaged 4.1 blocks per 40 minutes, pace adjusted, the third best mark in our top-100 ranking. Hammons uses his 7'3 wingspan, good mobility, excellent instincts, and a surprisingly quick second jump for a player of his size to alter shots at the rim, and was the key component in transforming Purdue into a top-20 defensive team.

Hammons' size and strength also allow him to be an effective post defender, as he's strong enough to hold his ground in the paint and uses his length to alter shots around the rim. He can still do a better job of denying position early, something he's mostly been able to overcome against the competition he's faced at the collegiate level, but which he'll have to do a better job of against some of the post-scoring talent he'll face in the NBA, which starts with showing a higher intensity level early in possessions.

Where Hammons has really improved has been on the defensive glass, as his 13.4 defensive rebounds per 40 minutes, pace adjusted, and 24.8% defensive rebounding rate are both easily career highs. Between Hammons and Caleb Swanigan, Purdue was one of the best defensive rebounding teams in the nation, and Hammons being more focused in this phase of the game helps his projection as a role player at the next level quite a bit.

Offensively, Hammons' bread and butter remains in the post, where over 60% of his offensive possessions come from, according to Synergy Sports Technology. Hammons shot 58.5% on shots out of post-up situations and averaged 1.217 points per possession according to Synergy, being one of the most efficient high-usage big men in the nation in that regard.

Hammons has excellent touch around the rim and uses his size, and length, well around the hoop. Hammons' footwork still isn't the most diverse or fluid, but he has a solid drop step, a fairly reliable jump hook, and has showcased an emerging turnaround jump shot, something that he can, at times, settle for with a little more frequency than you'd like. He did a better job of establishing good position in the post this year and seals his man off well, although he can still occasionally be pushed out further than you'd like, and be forced into more difficult shots than he would if he fought for position early.

Hammons' biggest weakness in the post remains his passing, although he did cut down on his turnovers some, as Synergy logged turnovers on just 12.7% of his post-up possessions, down pretty significantly from the 16.7% he averaged during his junior year. Still, averaging 3.4 turnovers per 40 minutes, pace adjusted, compared to just 1.8 assists, Hammons doesn't use the attention he receives in the post to create scoring opportunities for his teammates with any kind of regularity.

That jump shot, which we noted last year was showing potential, has become more realized into an actual weapon this season. Synergy logged 43 jump shots for Hammons beyond 17 feet, of which he shot 48.8% on, a pretty sizable improvement over the 16% on 25 field goal attempts he shot during his junior season. The sample size is very small, but the improvement, combined with what appears to be more consistent form and an increased comfort level, provides some hope for the future.

While Hammons can still go through periods where he seems to float, particularly offensively, he's improved in that area fairly significantly this season. He's developed, at least a little bit, as a jump shooter, while his impact on the defensive glass has improved substantially, and he's made his presence felt more consistently in the paint offensively. When you combine that with his excellent size and shot blocking instincts, it's increasingly likely that Hammons can carve out a niche as a role player at the next level, provided he proves willing of playing hard on a consistent basis, and is able to avoid many of the off-court issues that plagued him through his four years at Purdue. The fact that he turns 24 in August will likely prevent him being a top-20 pick, but a team could see real value in his ability to contribute right away in the 20-40 range, provided they aren't scared off by his red flags.More DX Scouting Reports and Video Breakdowns:
-Oregon State's Gary Payton II
-Washington's Marquese Chriss
-Kansas' Cheick Diallo
-Washington's Dejounte Murray
-Baylor's Taurean Prince
-Michigan State's Denzel Valentine
-UNLV's Stephen Zimmerman
-Marquette's Henry Ellenson
-LSU's Ben Simmons
-Michigan's Caris LeVert
-Louisville's Damion Lee
-Florida State's Malik Beasley
-Florida's Dorian Finney-Smith
-Cibona's Ante Zizic
-Estudiantes' Juan Hernangomez
-Oakland's Kay Felder
Read Next...