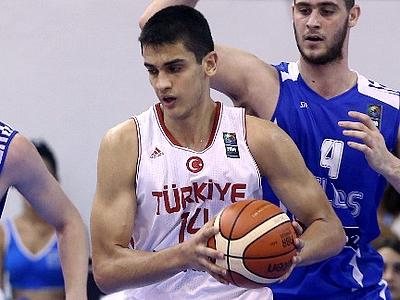 See our scouting report on Zubac from the FIBA U19 World Championship in Crete for a detailed breakdown.

Outlook: Skilled 7-footer for whom everything comes easy, especially scoring inside the paint and rebounding. Very intelligent player who has been receiving high-level coaching from European basketball legend Zeljko Obradovic for the past two years. Played up a year at this tournament, and helped Turkey reach the finals. Has a great future ahead of him if he's committed to reaching his full potential.

Strengths:
-Has tremendous height for a center at around 7-2 in shoes
-Has an incredible 7-6 ½ wingspan that would rank him among the longest players in the NBA right off the bat
-Very fluid and mobile. Can play above the rim with ease. Runs floor well. Covers ground nicely. Can get to places on the court (around the basket) that very few players on the planet can
-Very skilled for a player his size, particularly his age
-A consistent presence on the offensive glass. Has soft hands. Averaged 5.8 offensive rebounds per-40 at U18s. Career 5.5 in FIBA competition
-Can handle the ball a bit, even in open court. Long strides
-Has a nice looking jumper (from waist up) and should be able to develop into a capable shooter in time
-Excellent footwork and body control with back to the basket. Can score inside the post, sometimes from long vantage points
-Impressive touch around the basket
-Good feel for the game. Can find open man cutting to the rim
-Tremendous potential defensively with combination of height, length and mobility
-Very good shot-blocker. 3.5 blocks per-40 at U18s. Career 3.5 in FIBA competition. Rotates and protects the basket
-Steps out quickly and impressively on pick and roll. Extremely mobile.
-Shows some potential switching out on perimeter. Can move feet with small, choppy steps. Uses length to contest shots impressively
-Gets in passing lanes frequently (3.1 at U18s, 2.7 career)

Weaknesses:
-Frame is very frail. Still many years away from reaching physical maturity.
-Lower body in particular is very thin
-Has high hips, which affects his balance
-Gets backed down frequently in the low post.
-Average defensive rebounder
-Shot just 50% from 2-point range at U18s. Not as good of a finisher as you'd expect around the basket with his combination of size, length and athleticism. Lacks a degree of strength and toughness inside the paint. Career 3.5 free throw attempts per-40 and 50% 2P% at FIBA and ANGT level.
-Does a poor job of drawing fouls and getting to the free throw line
-Shows potential with his jumper, but struggled badly to convert at U18s. Hit just 1/12 jumpers at the competition. Rushes his shot at times, doesn't always display great balance. Contorts body sideways on release
-Career 26/45 (58%) FT% in 31 games

Outlook: Raw, developing prospect with huge upside. Has rare physical tools to go along with a versatile skill-set on both ends of the floor. Signed a contract with Le Mans in Pro A and will likely spend most of his time in the Espoirs league next season. Has clear-cut NBA upside with a chance to be a very high draft pick if he continues to develop accordingly.

See our scouting report on Papagiannis from the FIBA U19 World Championship in Crete for a detailed breakdown.

Outlook: Mobile, skilled 7-footer with a very thin frame. Was extremely productive in the 18 minutes per game he played coming off the bench, scoring efficiently on post-ups and off the ball, while rebounding and providing solid rim-protection. Will start the preseason with Zalgiris senior team and either play a minor role with them or move to second division team. How his body develops in the next few years will dictate what kind of NBA prospect he is.

Outlook: Bruising big man with a very developed frame. Tremendous rebounder, particularly on the offensive glass. A cross between Aron Baynes and Furkan Aldemir? Is his dominance on the glass a product of junior competition, or can he translate his rebounding prowess to the senior level as well?
Read Next...