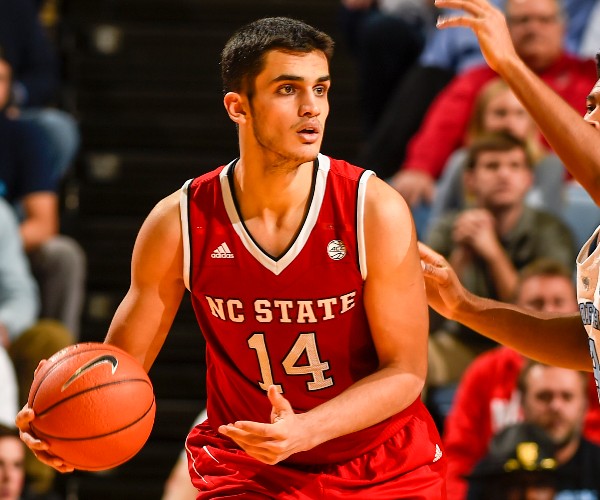 18-year-old Turkish Center Omer Yurtseven was one of the more highly touted international prospects coming into the tournament, and he did not disappoint. Yurtseven had a strong showing at the the U18 European Championship last year, and although he only played 18 minutes per game at the U20s, playing up by nearly two years, he posted per-40 averages of 23 points, 12.3 rebounds, and 3.2 blocks.

He has a unique blend of skills for an 18 year-old 7 footer, who can score with his back to the basket using either hand. He has a go to jump hook in the post that he likes to get to, and he possesses nimble footwork for a player of his size which he showcased in pick and roll situations.

Yurtseven is also an excellent rebounder, and although he is not the greatest athlete, he has very solid hands and instincts. He has a really good feel for the game and knows where to position himself off the ball for easy cuts and dump offs. Yurtseven competes on the defensive end of the floor and is a shot blocking presence, but like most of the bigs on this list he will need to fill out his frame and get stronger so he is no overmatched at the next level. He has already spent two seasons with Turkish club Fenerbahce Ulker, and despite some controversy surrounding his amatuer status, he will head to N.C. State next season to play under Mark Gottfried, where he has not yet been cleared to compete by the NCAA.
Read full article

Mike Schmitz
@Mike_Schmitz
Breaking down how 17-year old big man Omer Yurtseven from Turkey performed at the NBA Basketball Without Borders Global Camp in Toronto during All-Star Weekend. Also check out the scouting report we published on him and other prospects seen during all-star weekend.

NCAA schools we contacted who are recruiting him do not seem overly concerned by these allegations made by his head coach, and told us they will continue to do so, speculating the club may have had an inkling that he will elect to go to college, and that they were hoping this account they opened would prevent him from doing so.
Read full article

Matt Williams
@DraftExpress
-17-year old Turkish power forward Omer Yurtseven is perhaps the headliner of this year's camp among the European players slated to be in Toronto. A near 7-footer with a promising frame, a polished skill-set and impressive fluidity, the young big man averaged 6 points and pulled down 6 rebounds over 13 minutes per game in NBA preseason games against the Brooklyn Nets and Oklahoma City Thunder, looking like a potential future lottery pick in the process. Putting up huge numbers in the 2015 Adidas Next Generation Tournament and averaging 9.8 rebounds per game and 8.7 rebounds per game playing a year up at the U18 European Championship, Yurtseven is considered one of the more intriguing young big men in all of Europe. He lacks great length and has shown inconsistent intensity and toughness at times, but he's widely considered one of the top-1998 born prospects in the world.
Read full article

DraftExpress
@DraftExpress
17-year old Turkish big man prospect Omer Yurtseven discusses his performance against the Brooklyn Nets at the Barclays Center in Brooklyn, New York. Yurtseven scored 8 points on 3-4 shooting and grabbed 7 rebounds with one block in 15 impressive minutes of action, showing terrific poise, excellent mobility and a high basketball IQ, despite matching up against players significantly older than him. He ran the floor well, set bruising screens, finished with both hands around the basket, rebounded his area, competed defensively, and attempted a NBA 3-pointer confidently with smooth mechanics.

Outlook: Skilled 7-footer for whom everything comes easy, especially scoring inside the paint and rebounding. Very intelligent player who has been receiving high-level coaching from European basketball legend Zeljko Obradovic for the past two years. Played up a year at this tournament, and helped Turkey reach the finals. Has a great future ahead of him if he's committed to reaching his full potential.
Read full article

DraftExpress
@DraftExpress
One of the youngest players in attendance here, 1998-born power forward Omer Yurtseven didn't look entirely out of place here. Standing 6'11.5 with a 7'0.75 wingspan, a 9-foot standing reach, and a 228-pound frame, the Uzbekistan-born Turkish national has impressive physical tools for a 16 year old. He has a fairly strong base and proves to be a solid athlete on the move. Coming up with a few finishes at the rim showing soft touch and good footwork while tracking down loose balls and blocking a few shots defensively, this was a nice showing for the young big man who averaged an absurd 24.8 points, 14.8 rebounds, and 3 blocks at the adidas Next Generation Tournament earlier this spring. The release on his jump shot is a bit low and he didn't exactly impose his will on the game here, but he held his own far better than many of the not-yet draft age players who have been invited to Treviso in the past. His feel for the game, physicality and strong tools will serve him well moving forward. Yurtseven is a player teams will be keeping close track even though he can't declare for the draft until 2017.
Read full article

DraftExpress
@DraftExpress
16 years old and nearly possessing the size to play center at the NBA level, Turkish power forward Omer Yurtseven stands 6'10 without shoes with a solid 7'0.75 wingspan and a promising 228-pound frame. Putting those two numbers in perspective, his 9'0 standing reach is two inches taller than the average power forward selected in the top-15 all-time and 2 inches shorter than that of the average center. Flashing some budding skills at the power forward position, even if Yurtseven's development as a shooter stagnates, there's a strong chance he'll be big enough to play the five by the time he's old enough to declare for the draft in 2017.
Read full article