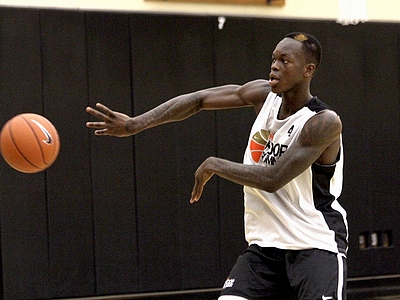 When we first wrote about Dennis Schroeder six months ago, just as he was beginning to take off as a NBA prospect, few people in his own country even knew his name. Fast forward to today, and Schroeder is one of the hottest prospects in the 2013 draft, fresh off a strong week in Portland where he introduced himself in very impressive fashion to a plethora of NBA scouts and executives who were mostly watching him for the very first time.

Schroeder's work started in the practices, where, as the oldest player on the team, he immediately established himself as the leader of the group. The team's offense was heavily geared towards his strengths, which are very conducive to the setting in which the game was played in.

Featuring terrific ball-handling skills, a lightning quick first step, excellent speed in the open floor, and a penchant for getting teammates involved, Schroeder did an outstanding job in both transition and in the half-court, getting to virtually wherever he wanted on the floor. He executed his team's offense effectively, doing a good job of pushing the ball inside when needed, and finding teammates constantly spotting up on the perimeter or cutting to the rim for a layup after blowing past his man.

His pick and roll skills looked much improved from the beginning of the season, as he obviously benefited from the increased spacing he enjoyed with so many shooters around him at all times. His patience in the pick and roll has come a long ways from when we first started watching him, as he did an excellent job of reading the floor and knowing when it's time to accelerate or decelerate, sometimes putting his man on his back and making the defense react.

When defenses decided to go under the screen, Schroeder's pull-up jumper was enough of a weapon here for him to punish them, and he generally did a solid job through the week of convincing scouts that the 40% he's shooting from the 3-point line is not a fluke, despite his average mechanics. Schroeder is making a ridiculous 53% of his catch and shoot jumpers on the season in Germany according to Synergy Sports Technology, even if the sample size of 57 shots leaves something to be desired, he was very consistent throughout the week in Portland.

Combine his jump-shot with his first step, open-court speed and ability to get teammates involved, and you have a pretty complete skill-set for a NBA point guard, even if he still clearly has to work on his ability to finish around the rim, as indicated by the paltry 44% he's currently shooting from 2-point range in Germany. He's a little non-chalant with his finishes, relying too heavily on floaters and struggling somewhat through contact, but this is an area he can improve on in time.

On the other end of the floor, Schroeder did an excellent job as well. He measured a solid 6-2 in shoes with an excellent 6-7 ¼ wingspan, and looked intent on using it every moment he was on the court. Schroeder's lateral quickness might be the best of any point guard in this year's draft class, as he's able to put suffocating pressure on the ball in the full-court, bodying up his matchup and sliding with him every inch he takes up the court. He will need to continue to fill out his slender 168-pound frame, but there is a lot to like here despite his average size.

Schroeder has come a long way in the past year or so, both on and off the court. He appears to have matured with his body language and overall approach to the game, and did an excellent job of leading the World Team by example all week in Portland, which culminated in a big win over the American team on Saturday. He still has a ways to go with his decision making skills, as indicated by the 4.2 turnovers he's averaging per-40 on the season, but he's clearly on the right path now. He has a very good chance of going in the first round now, and could possibly even boost his stock into the top-20 with strong workouts over the next two months. 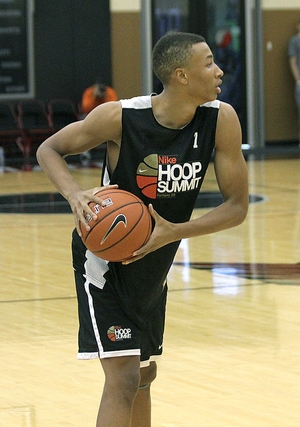 At this point, Exum is unlikely to go pro and declare in 2014 as an international early entry prospect from what he told us. Intent on playing in the NCAA and continue to improve on his weaknesses, the question is when will he enroll and what school will make space for him. A coachable and extremely talented prospect with elite intangibles and a promising skill set, Exum is a player NBA teams will track closely regardless of where he ends up. That will start this summer when he leads the Australian U19 National team at the World Championship in Prague.

Another campaign with the Montenegrin senior national team likely awaits him this summer, and possibly a more important role with his hometown team in the Adriatic League next season, so it will be interesting to see if he's able to recapture the promise he showed as a 17-year old playing up three years in the FIBA Europe U20 Championship in 2011.
Read Next...