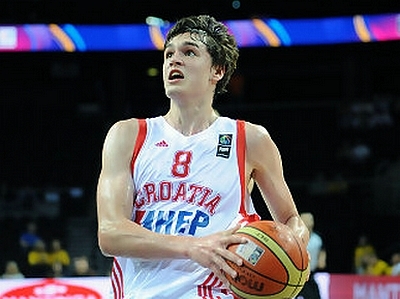 Jonathan Givony
@DraftExpress
Emptying the notebook from the past few months, we recount a selection of the elite international players we evaluated and discuss their future prospects and development, including: Mario Hezonja, Ilimane Diop, Dante Exum, Zhou Qi, Ben Simmons, Marko Arapovic and more.

-Good size for a wing
-Strong frame
-Good athlete. Nice quickness and explosiveness
-Solid shooter with feet set or off the dribble
-Can make tough shots with a hand in his face
-Solid ball-handler. Knows how to score in isolation settings. Crafty footwork getting into paint. Finishes elegantly around the rim with high-angled layups, or with power over opponents
-Sees the floor. Can pass a bit when he wants to
-Athleticism, strength allows him to rebound at a high rate, block shots occasionally
-Terrific scoring instincts and all-around feel for the game

Outlook: One of the top talents in European basketball in any age group. The MVP of the U16 European Championship. Averaged 30 points per-40 at the U17 World Championship. Already putting up good numbers in LEB Gold (Spanish second division) on Barcelona's second team, Barcelona II. Signed a seven year contract with Barcelona this past summer, with a two million Euro out clause for the NBA. Only question marks revolve around his attitude and whether that could stop him from achieving his extremely high potential.

Interview from the U17 World Championship:

Strengths:
-Great size
-Has a frame that should have no problem putting on weight as he matures
-Tremendous wingspan
-Extremely mobile
-Fundamentally sound player
-Very good feel for the game
-Solid scoring instincts
-Shows a framework of a solid post game. Can back down players his age with solid footwork. Has a nice jump-hook
-Can make a mid-range jumper. 65-70% free throw shooter
-Excellent presence defensively. Good shot-blocker
-Good rebounder

Outlook: Senegalese big man who came to Spain at age 14 and was naturalized. Very exciting prospect. Looks to have all the tools to develop into an outstanding player down the road. Performed very well this past summer at both the U17 World Championship and U18 European Championship. Has great physical attributes, but also a solid skill-level and feel for the game. Rights are owned by Caja Laboral. Currently on loan to Aurteneche Maquinaria in LEB Silver (Spanish 3rd division).

Strengths:
-Terrific size for a point guard at 6-4
-Nice wingspan. Good frame
-Extremely smooth, fluid athlete with unbelievable body control
-Great first step
-Tremendous creativity with the ball in his hands
-Gets extremely low to ground on drives. Terrific ball-handler. Changes speeds. Super long strides make him tough to stay in front of. Rangy drives. Gets to basket off one dribble
-Puts huge pressure on the defense. Draws tons of fouls
-Superb in transition
-Finishes elegantly around the basket, sometimes from far outside the paint. Uses reverse moves effectively
-Can finish above the rim
-Creates effectively for others. Unselfish player
-Excellent feel for the game. Everything comes incredibly easy
-Solid rebounder for position

Weaknesses:
-Struggles to make shots from outside
-Shooting mechanics are poor
-Needs to improve his ability to drive and finish with his left hand
-Must get stronger. Gets pushed around on defense at times
-Still working on decision making skills in the half-court- when to score and when to distribute. Not quite a pure point guard yet

Outlook: Big, smooth guard with tremendous ball-handling skills and creativity. Outstanding talent and clear-cut NBA prospect. If he can improve his jump-shot, the sky is the limit. Currently at the Australian Institute of Sport. Reportedly leaning towards college (2014 recruit), like his father, Cecil Exum, who won a national championship at North Carolina, and moved to Australia to play professionally. Good enough to play virtually anywhere, but likely best suited going somewhere where he'll be counted on as a primary ball-handler, despite his size.

Strengths:
-Has great size at over 7-feet tall
-Long arms
-Very mobile for his size
-Excellent hands
-Versatile offensive player
-Shows decent footwork and post moves
-Makes turnaround jumpers with soft touch
-Can make a mid-range jump-shot. Shows range out to the 3-point line
-Converted 85% of his free throws at the U17 World Championship
-Can attack slower centers from the mid-post off one or two dribbles
-Solid passer
-Very good timing as a shot-blocker

Weaknesses:
-Extremely frail. How much will his body fill out?
-Lacks the strength or toughness to take advantage of his size consistently inside the paint
-Struggles to establish deep post position. Shies away from contact
-Has a difficult time finishing when an opponent puts a body on him
-Rarely boxes out on defensive glass. Doesn't go out of his area for loose balls
-Very passive offensively. Doesn't call for the ball or show any real emotion
-Activity/effort level is average. Doesn't run the floor willingly. Looks a bit lazy/apathetic at times

Outlook: One of the most talented international prospects in the 1996 class. Extremely gifted 7-footer with tremendous versatility and an advanced offensive game for his age. Shows good timing defensively. Very productive at the junior level. Mental makeup is a bit of a question mark. Doesn't show great passion for the game. Sometimes looks like he's playing because he's tall and talented, not because he enjoys it. Still extremely young both age-wise and physically, so has plenty of time to continue to develop.

Outlook: Extremely young. Only 15 years old at the U17 World Championship. Skill-level still catching up. Able to dominate players his age using his superior strength and athleticism. A little bit stuck between forward positions at the moment. Needs to improve as a ball-handler and shooter to play as a small forward. Will likely play college basketball starting in 2015.

Strengths:
-Solid frame for age. Should fill out
-Very efficient offensive player
-Can score inside the post with smooth footwork and a jump-hook he shoots with either hand
-Shows range out to the 3-point line
-Great timing on the offensive glass
-Great fundamentals
-Tremendous feel for the game
-Excellent passer
-Team player

Outlook: Considered one of the top European prospects in the 1996 class. Son of Croatian national team 7-footer and Olympic silver medalist Franjo Arapovic. Appears to have been coached extremely well growing up, as he shows the maturity and fundamentals of a much older player. Does not show great athleticism at the moment, but is still in an early stage of his development physically.

Outlook: Already seeing some playing time for Chalon, the Euroleague team from France. Possesses phenomenal physical tools. Can make a huge impact around the basket when dialed in. Has special rebounding instincts. Offensive game is very raw, but doesn't seem to understand that. Looks to have ample size to play the 4 at the pro level. Just needs polish up his skill-level and improve his basketball IQ and attitude.

Outlook: Highly unconventional, but extremely productive player who is very difficult for opposing teams to match up with at the junior level thanks to his terrific combination of strength, smarts and skills. Will need to find a position defensively and continue to expand his shooting range. Struggled to score with the same proficiency when matching up with Team USA, so question marks persist about how his style of play will translate to higher levels. Already seeing some minutes in the Argentinian league. Probably only a matter of time until someone in Spain snatches him up.

Weaknesses:
-Sees most of his minutes at power forward right now
-Skill-level is average at best
-Cannot shoot with any real range
-Needs to improve ball-handling skills in half-court
-Doesn't know how to utilize his athleticism offensively. Doesn't get to the free throw line

Outlook: Hails from French Guiana. Promising prospect thanks to his combination of strong physical tools, feel for game and effort level. Much more advanced defensively at the moment. If he can develop a jump-shot, has a chance to play at the highest levels of basketball. Currently playing major minutes in the French 3rd division with INSEP.

Strengths:
-Great frame that should fill out nicely in 3-4 years
-Very long wingspan
-Extremely mobile. Covers tons of ground. Rangy moves
-Excellent timing as a shot-blocker
-Goes out of area for rebounds

Weaknesses:
-Limited offensive player
-Doesn't have much in the ways of post moves or a face-up game
-Lacks strength. Gets pushed around inside the paint
-Should be a much better rebounder than he is
-Looks a little bit lazy/apathetic at times.
-Poor passer. Average feel for the game

Outlook: Extremely long and mobile big man with excellent shot-blocking instincts. Looks to be in a very early stage of his development. Needs to get with a good program to develop his skill-level and basketball IQ. Has potential, but can he maximize it staying in Egypt?

Weaknesses:
-Small. With very short arms
-A little too spectacular at times. Can get extremely wild. Turns ball over too much. Decision making needs work
-Struggles to finish inside the arc
-Streaky outside shooter

Outlook: Quick and aggressive point guard with strong character and nice creativity. Lack of size limits his upside, but could emerge as a solid player for China down the road.

Weaknesses:
-Not a great athlete
-Needs to improve ability to create inside the arc and finish around the basket
-Lateral quickness appears average. Defensive potential still a question mark

Outlook: Not oozing with upside or skills, but looks to have a solid future at the European level thanks to his versatility and smarts. Already seeing some minutes in the Adriatic League with Siroki.

Strengths:
-Good size
-Great speed in transition
-Super quick hands for steals
-Can shoot a bit. Doesn't have bad form. Can pull-up off dribble. Definitely has potential as a shooter
-Great potential defensively. Can put great pressure on ball and move feet

Weaknesses:
-Average ball-handler. Struggles to get all the way to rim at times
-Struggles to finish through contact. Must get stronger
-No left hand
-No in between game
-Does not possess great instincts for playing the point. Doesn't know how to run a team. Tends to overdribble. Sometimes overly aggressive
-Fundamentals on defense are poor. Stands very upright. Gambles for steals

Outlook: Physically talented guard still at a very early stage of his development. Has good potential with his size, athleticism and shooting ability, but must improve his fundamentals and playmaking ability.

Outlook: Talented young point guard who shows intriguing physical tools and solid potential as a ball-handler and facilitator, but is still in a very early stage of his development. Already seeing solid minutes in the Adriatic League at a very young age, so clearly his team sees something in him.

Strengths:
-Chiseled frame
-Very long arms
-Outstanding athlete
-Can faceup and attack off the dribble. Good in straight lines
-Tremendous finisher with a head of steam
-Great competitor on defense
-Goes after every rebound

Outlook: Extremely athletic and well-built forward who is slowly converting from an undersized power forward to a power 3. We've seen him on a number of occasions starting at the U17 World Championship in Hamburg in 2010, at the U19 World Championship in Latvia in 2011, and at the 2012 EuroCamp and adidas Nations. Would have been an excellent mid-major college player with his brute strength and athleticism, but elected to go the pro route, signing with the Melbourne Tigers in the NBL.
Read Next...