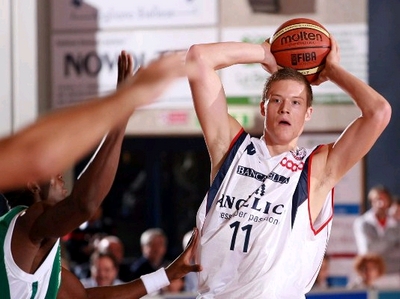 Jonathan Givony
@DraftExpress
With the 2009 Reebok Eurocamp in the books, we look back and empty our scouting notebooks from a great weekend in Treviso, Italy. The Eurocamp continues to progress from year to year and has become a must-see event for NBA and European teams alike.

In this report well focus only on the players who did not receive extensive write-ups in our first two articles covering the camp. Scouting reports on Patrick Mills, Vladimir Dasic, Tomas Satoransky, Sergey Gladyr, Alexey Shved, Patrick Beverley, Rodrigue Beaubois and Nando De Colo can be found in those previous reports posted below.

All measurements are the official ones taken at the Reebok Eurocamp.

Markovic had a pretty strong week here, which makes sense considering that he was a major contributor on a very good Hemofarm that made a deep run in this years EuroCup competition. He showed nice versatility as a big point guard, doing a good job creating shots for himself and others, particularly on the pick and roll, where he excels. He has good court vision and is not afraid to make the extra pass, looking like a pretty unselfish player with a nice feel for the game. On the negative side, hes an average athlete by NBA standards, struggling to get by his defender from time to time, and seems to be a bit streaky as a perimeter shooter, particularly when forced to pull up off the dribble. While he puts a solid effort in on the defensive end, his lack of length, strength and lateral quickness limits him to a certain extent. His decision making skills could also use some work, as he tends to get out of control at times and is a little more turnover than youd hope. Markovic looks like a solid prospect for European basketball, and will probably move up the ladder quickly over the next few years. His NBA potential looks limited, though.

For the second straight year, Jaka Klobucar shrugged off an average season in Olimpia Ljubljana to post an extremely impressive Eurocamp performance. Klobucar was one of the camps top performers from a statistical standpoint, making a big impact in nearly every game he played in, while shooting the ball far better than he had over the course of the year.

Klobucar is a solid athlete by European standards, putting the ball on the floor down nicely to create shots both for himself and others throughout the week. He made shots an excellent rate, knocking down catch and shoot 3-pointers at will, even pulling up smoothly off the dribble after a sharp crossover on one occasion. His court vision looks solid as he dished out a number of impressive lefty passes, and he also did a nice job moving off the ball looking for open spaces. Klobucar played intense defense from time to time, but is severely limited by his extremely poor wingspan. He has been criticized at times in his home country for a certain lack of mental and physical toughness, but he seems to be improving in these areas. Although his body of work is pretty small if you look at his international career and the fact that hes already draft-eligible, he may have caught someones eye enough in Treviso to warrant being selected somewhere late in the second round, which was certainly not the case going in.

After an extremely impressive showing at last years Reebok Eurocamp, Henk Norel took somewhat of a step backwards in this his draft-eligible year, struggling to get back in the same rhythm after an injury plagued season. Norel looked a lot more tentative than we remembered him, not running the floor quite as well or doing as good a job crashing the glass. Hit perimeter jumper wasnt falling, and he didnt finish particularly well around the basket. Considering his status as a hustling role-player, hes obviously not as interesting for teams if he isnt doing all those things. Nevertheless, Norel still showed sparks of being the same player we saw and really liked early this season and in last years Eurocamp, and its not out of the question that he regains that same form once he shakes off the rust he accumulated over the past few months. Hes still a tall and very mobile big man with good length and great energy, and he could definitely develop into a solid rotation player over the next few years.

Coming off an impressive showing in the Italian league semi-finals, Jerebko played only one game here on the camps final day. Regardless, he was able to make his presence felt immediately, looking impressive in both the morning drills and the actual game--giving the NBA people a very good feel for what he brings to the table. Jerebko shot the ball well throughout the day, only missing one of his seven shots in the game, while picking up 5 steals, 4 rebounds and 2 assists in 28 minutes. He also showed something of a back to the basket game, using his superior size to get off a pretty and very old-school sky-hook shot in the lane. He played very physical man to man defense on the perimeter, while always looking to make the proper rotation on team defense. He also showed plenty of hustle, going the length of the floor with reckless abandon at one point to come up with a loose ball, and using his length to alter plenty of shots around the paint as well, not giving his matchup anything easy. Considering the small sample size, there wasnt a whole lot more Jerebko could have done. After seeing him a number of times in person over the past year and a half, its safe to say that there arent many players like him in this draft.

After sitting out the entire season with yet another knee injury, it wasnt a big surprise to see Nemanja Aleksandrov do virtually nothing over the course of the camp. There may not have ever been a more dramatic fall from grace than the one Aleksandrov has been though over the past five years, going from being considered a potential #1 overall pick to likely going undrafted this June. The combination of injuries and passivity has placed serious question marks about his professional future, and at this point Aleksandrov should be more concerned about getting back to the basketball court than impressing NBA scouts. He did show a nice skill-level in the drills, but once the games started seemed to be a step slow on most of the action and really struggled to make his presence felt on the perimeter.

Despite being a somewhat unlikely candidate to participate in this setting, NCAA redshirt junior turned pro David Huertas did a great job taking advantage of the opportunity presented to him, likely helping his professional stock tremendously in the process. Huertas was absolutely automatic with his feet set throughout the week, showing a picture perfect stroke that he used to knock down a barrage of 3-pointers. He was extremely aggressive offensively, showing very advanced instincts as a shot-maker and looking very hungry trying to put the ball in the net, which really benefited him over the course of the week. Huertas will need to round out his game significantly over the next few years, as hes not a particularly efficient scorer, being an average ball-handler with inconsistent decision making skills and showing shot-selection and defensive ability that could certainly use some work. He certainly made himself plenty of money over the course of the week with his scoring, though, and there were even some teams that quietly began to bring his name up in second round conversations by the time this camp was over.

Likely the top Spanish player in the 1989 age group, Pablo Aguilar surely doesnt have the hype of his counterparts in the 1988 (Victor Claver) or 1990 (Ricky Rubio) classes in Spain, but is regardless a very solid basketball player.

Standing just 6-8 with an underdeveloped body, Aguilar is undoubtedly a bit undersized for the power forward position. He does make up for that with a great wingspan and very big hands, though, to go along with solid athleticism. Aguilar did all kinds of little things for his team here in Treviso, be it getting in the passing lanes, coming up with blocks, crashing the offensive glass, or contributing to his teams ball-movement with heady passes. Its clear that he was one of the most experienced players at this camp after playing nearly 20 minutes per game this year in the extremely tough ACB league, despite being just 20 years old. He has a good feel for the game and appears to be a very competitive and coachable player, which certainly bodes well for his professional future.

Offensively, Aguilar appears to be somewhat limited at the moment, not being strong enough to be much of a presence in the paint, and lacking the ball-handling skills to create his own shot consistently from the perimeter. He is a very good shooter from beyond the arc, though, even if he does sport a somewhat flat looking shot.

Aguilar doesnt appear to be a great NBA prospect on first glance, as he doesnt share the same size or upside of some other European power forwards, but he will at the very least develop into a great pro in his native country of Spain, if not more than that. If he continues to develop over the next two years the way he did this past season, hes going to be a player that NBA teams will have to look at.

Despite showing good height and an absolute freakish wingspan, Aboubakar Zaki had a tough time making his impact felt at this camp. Zaki came out of the gates looking like a player who has absolutely no clue what his limitations aresettling for terrible jumper after terrible jumper from the perimeter, some of which did not even hit the rim. Offensively hes extremely limited, and defensively he wasnt anywhere near enough of a presence to compensate for that. He rarely boxes out for rebounds, showing poor hands when one does fall his way, and seems to wildly chase blocks, even if he can be somewhat of an intimidator if his lack of strength isnt a factor. Zaki is 21 years old and sports a frame that may not be able to carry much more weight, and thus looks like more of a prospect for Europe than he does for the NBA. He needs to get playing time and significantly improve his basketball IQ if hes to reach his full potential.
Read Next...