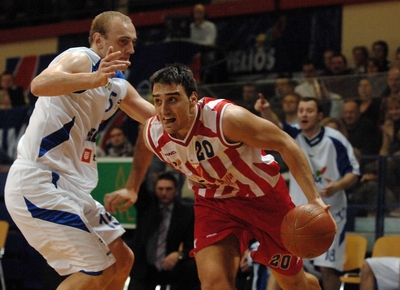 A couple of excellent back-to-back performances for Tadija Dragicevic, leading Red Star to consecutive victories, has earned him another nomination for Player of the Week honors. First in the ULEB Cup, with 19 points and 3 rebounds against Panellinios, and particularly in the Adriatic League, improving to 26 points and 10 rebounds. The Serbian power forward commands the Balkan competition both in efficiency and points per game (20.9).

As the season advances, were seeing a wider repertoire in Dragicevics game. Yes, hes mainly a face up guy who does a great job combining terrific three-point shooting ability (he fires usually in static fashion, and probably enjoys range out to the NBA three-point line) with his ability to put the ball on the floor going either direction (he enjoys a pretty nice left hand). But hes also an able post guy. Relatively short and not showing great leaping ability, its not common to see him releasing jump-hooks, usually instead trying to beat his opponents with spins looking for layups. Even if hes not close to the basket, he sometimes will turn around and face his match-up to attack him off the dribble. In any case, he shows solid footwork, nice use of his body and good control of offensive situations. Hes a pretty smart player with nice court awareness. However, his degree of offensive activity and incisive game translates to a serious amount of turnovers, although he also draws a large amount of fouls in the process, which allows him to produce consistently from the free-throw line.

2785
Anyway, his NBA potential is close to non-existent. His athleticism is limited (he cant be anything but a power forward), and hes not particularly big. His man-to-man defense is solid, but he barely offers any aggressiveness team-wise (so hes neither a hustler) and his offensive skills would be seriously short-handed against more athletic opponents than he faces in Europe. Obviously, his future in the Old Continent is a completely different story, and he might turn into an excellent player for a high-class team over here.

A Look at Omer Asik

As a late bloomer and automatically draft eligible already in 2008, were trying to gather as much footage on this intriguing Turkish center as possible, and spread our thoughts out in the process. His performance in the Euroleague against AXA F.C.Barcelona last week was really interesting, and showcased rather defined strengths and weaknesses in Asiks game.

Starting with the good news, Omer emerged as a terrific shot-blocker, a very intimidating presence down low that often worked wonders for Fenerbahces defense and its comeback in the game. He was extremely active contesting shots in his area of influence, which is pretty wide. Asik is a very mobile player who displays very nice positioning and excellent timing, which paired with his terrific length, allows him get regular shot-blocking production. He was credited with 4 blocks, and was called for a questionable foul on a fifth. Besides, hes strong, can hold his position on the low post, but hes also relatively quick in the lateral move. All in all, his defensive potential looks extremely interesting.

2786[c]Asik guarding Kaya Peker[/c]
On the negative side, his limitations as a scorer got exposed. For starters, hes confirming our suspicions about his non-existent jumper. He never goes for the long-range shot, hardly even for the mid-range one, so ultimately he doesnt even keep the defense honest, while he doesnt look reliable at all from the charity stripe. He might eventually develop a decent shot, but by no means should we expect it to happen in the short term.

In the end, where Asik does his damage is near the basket. Hes a good player without the ball, willing and smart to get good position in the lane. He can nicely evolve with his back to the basket, using his length, strength and decent footwork. However, he becomes pretty predictable because he usually works with his left shoulder trying to release a right-handed jumphook, even forcing the situation when it would be a lot easier to spin and use his left hand. Actually he doesnt seem to have much of a left hand to finish around the basket, while his touch with his right is a bit suspicious. Anyway, he delivered an impressive highlight as he was posting his opponent up close to the basket, seeming on his way to go for a short jumphook, and instead hammering the ball over his rival with his right hand. Hes definitely a guy who can regularly play above the rim.

Well have more opportunities to evaluate him, but he's increasingly looking like a rather safe name to expect to hear called on draft night.

Nikola Pekovic delivered another monster game in the Euroleague, scoring 26 points, grabbing 16 points and, whats even more surprising, coming up with 4 blocks, adding more in just one game than he had gathered previously in all the top European competition games combined. Pekovic ranks third in efficiency, also third in points (20 per game) and fourth in rebounds (7.9).

Anton Ponkrashov keeps gaining importance in Khimkis rotation, and this past week he had 17 points, 3 rebounds, 6 assists and 2 steals against Azovmash in the ULEB Cup, although his team lost its first game in this competition.

Dusan Sakota connected for 20 points to go along with 4 rebounds and 3 steals as his team Panionios beat ASCO Slask Wroclaw. The shooting power forward is averaging 17.7 points in the last three games in the ULEB Cup.

George Tsintsadze emerged with an all-around game with 10 points, 6 rebounds, 9 assists and 4 steals as his team Tartu Rock unexpectedly demolished CSK-VVS Samara in the FIBA EuroCup. The Georgian point guard leads the competition in assists, with 6.8 per game.

Nathan Jawai toyed with his opponents, the Singapore Slingers, with 25 points, 16 rebounds and 2 assists. Still, his team Cairn Taipans couldnt get the final victory in the game. Jawai is currently averaging 18.1 points and 9.6 rebounds (fifth in the NBL).

Alexey Shved is enjoying very little chances to hit the court for CSKA. Obviously, for a young player like him, its extremely difficult to get opportunities with arguably the best team in the Europe, but not even in the last month, when the team from Moscow suffered an injury plague, could he see any meaningful playing time. On the other hand, his coach Messina stated in his excellent blog just a few weeks ago that he liked the way Alexey Shved has worked for last several weeks. He was the most competitive among our young players in practice and if he continues to work the same way, I think, his moment will come. We hope hes taking advantage of practicing with nine of the best players in Europe hands down (the nine-man core of CSKA is unbelievably strong); otherwise, perhaps a loan would make more sense. At some point, he will need to hit the court in order to keep improving.

-After several weeks of rumors, it has been made public that Milan Macvan will play for Hemofarm. The MVP of the last U-19 World Championships had the chance to explore the Serbian market once he turned 18 years old in order to sign his first professional contract. His final destination comes as a surprise after so much talk about Partizan landing him.

It was also made public the teams taking part in this years edition, and besides the perennial Spanish army, there will be four foreign invitees consisting of FMP, Cibona Zagreb, CSKA Moscow and Pau Orthez. Some players expected to show up at the tournament are Dejan Musli, Tomislav Zubcic, Nihad Djedovic (if hes released from his LEB-2 obligations) and David Jelinek.
Read Next...