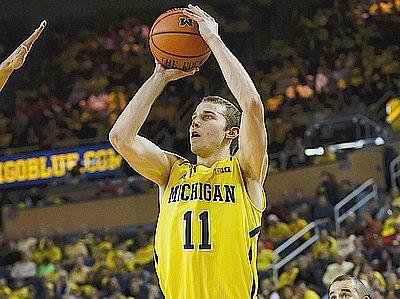 Breaking Down the Top 17 Shooting Guards

-
Nik Stauskas's situational statistics reinforce what we already know about him, but also offer a glimpse into how smoothly he adapted to a new role without Trey Burke.

Looking at the bigger picture, Stauskas 15.4 possessions per-game and 11.9% turnover rate rank just around average. A prolific shot maker from the perimeter, Stauskas's 1.124 points per-possession rank 2nd in this group to only Spencer Dinwiddie (who only played in 17 games). Scoring a sample leading 1.156 points per-jump shot, Stauskas was tremendously consistent both off the catch (49% FG%) and off the dribble (38% FG%) as a sophomore.

Perhaps the most interesting aspect of Stauskas's profile is that he led this group of players with 29.5% of his possessions coming as the ball handler on the pick and roll. Averaging 4.6 pick and roll possessions per-game, up from just 1.5 per-game a year ago, the Canadian shooting guard picked up much of the slack left behind by Jazz point guard Trey Burke in Michigan's half-court offense while continuing to shoot the ball in spot-up and off screen situations at an All-American level.

Scoring an average 1.154 points per-shot around the rim overall, Stauskas's lack of elite athleticism shows there, but his resume is exceptional on paper, and whatever team selects him will be getting a player that can stretch the floor and make jump shots, but showed unique situational versatility for a shooter of his caliber a year ago.

-
Unlike Stauskas, Gary Harris was not as impressive on paper. Harris' profile is decidedly average in terms of usage and efficiency overall, as his 16 possessions per-game and 1.02 points per-possession both rank very close to the group mean.

Aside from the fact that he used an above average 23.2% of his possessions in transition, Harris' usage distribution reads fairly similar to the average 2014 shooting guard prospect.

Harris's shooting breakdown, however, stands out in two areas that explain his middle-of-the-road efficiency. 74.7% of Harris's shot attempts last season were jump shots, the second largest percentage of any player in this group. He scored a top-5 ranked 1.05 points per-shot on those attempts. In contrast, Harris scored .982 points per shot around the rim in the half court, the 3rd lowest mark among players in this group. Getting to the rim for just 1.6 shots per-game in the half court, Harris didn't do much damage in close outside of transition, limiting his efficiency despite his solid shooting from the outside.

Though these numbers don't paint Harris in the most positive light, it's worth noting that much of Harris's appeal is lost in a study such as this one. His coachability, willingness to defend, and basketball IQ don't show up here, and while those attributes, along with his shooting ability, give him plenty of appeal at the next level, he does have room to improve his ability to create his own shot and score efficiently inside.

-
UCLA's Jordan Adams profile suggests that he's one of the most unique players in this class. For starters, though he leads this group of shooting guards in field goal percentage, he ranks just 5th in points per-possession.

On top of that, what makes Adams so interesting is his unique situational breakdown. While he uses fewer pick and roll, spot-up, and isolation possessions than any player in this sample, each by a fairly considerable margin, he ranks 3rd seeing 4.3 possessions per-game in transition and 2nd averaging 3.3 off screen possessions per-game.

Though Adams is often maligned for his athleticism, he ranks as the 2nd best finisher in this group scoring 1.376 points per shot around the rim in the half court, seemingly on instincts and assertiveness alone. The worst jump shooter in this group scoring .853 points per-jump shot, Adam's unique role had a polarizing effect on his perimeter efficiency as he didn't see nearly as many traditional catch and shoot opportunities as his peers a year ago. With that in mind, it will be interesting to see how the trimmed down Adams is used as a rookie and how he adjusts to potentially more traditional role.

-
Texas Legends shooting guard P.J. Hariston's profile offers a fairly unique glimpse into the style of play in the NBADL on paper as well as how quickly he adapted and thrived playing in it.

In the half court, the majority of Hairston's possessions came in spot up situations, as he used a sample high 5.4 spot-up possessions per-game. With just 6.3% of his possessions coming on the pick and roll and 6.9% coming in isolation situations, both of which rank in the bottom-3 among players in this group, Hairston exploited the pace and spacing of the D-League to rank among its top scorers.

Almost half of Hairston's possessions were catch and shoot jump shot, more than any player in this group. Though he made just 34.3% of those attempts, he made 47.6% of his pull-up jump shots on limited attempts, ranking above average in perimeter scoring efficiency overall. Ranking just average as a finisher, Hairston's huge role and at times explosive shooting in the NBADL gives teams a very accurate gauge of what he'll bring to the table as a rookie.

-
As one might expect considering his relatively meager production as a freshman at UCLA, Zach Lavine's situational profile doesn't paint a pretty picture. Using 9.7 possessions per-game, he ranks as the lowest usage player in this group, and as the least efficient scorer in both one-on-one and pick and roll situations. On the positive side, LaVine's athleticism shows here, as 32.1% of his possessions came in transition, more than any other player, and while he scored an above average 1.148 points per-catch and shoot jump shot, the team drafting him probably won't be overly concerned with how he looked on paper this past season as focused as they'll be on putting him in position to reach his lofty potential a few years from now.

-Every year a player who had their college career cut short by injuries looks phenomenal on paper, and this season, that player is Spencer Dinwiddie. While he appeared in just 17 games and used the 3rd fewest possessions of any player in this group averaging 12.5 per-game, his 1.17 points per-possession ranks second in this draft class among players at all positions trailing only Doug McDermott by a slim margin. Ranking 1st among players in this group in pick and roll and isolation scoring efficiency and second in spot-up scoring efficiency, Dinwiddie's 1.127 points per-jump shot and 1.28 points per shot in the half court at the rim both rank well above average and are the driving force behind how comprehensively efficient Dinwiddie's shortened season was.

-C.J. Wilcox ranks above average in both usage and efficiency scoring 1.058 points per possession over 16.6 possessions per-game. The highest usage off-screen scorer in this group averaging 3.5 possessions per-game, Wilcox's 3rd ranked 1.116 points per-jump shot is the driving force behind his solid overall efficiency and reinforces what we already knew that his jump shot is his most appealing aspect as a prospect. Diversifying his role a bit this season, Wilcox finished at a just above average 1.181 point per-shot clip, but ranked right at or above average across the board thanks to his tremendous shooting stroke.

-Markel Brown ranks well here, as his 1.382 points per shot in finishing situations around the rim ranks 1st in this group. Combining that with terrific pull-up jump shooting and his above average 1.047 points per jump shot overall, Brown ranks as one of the more efficient pick and roll and half court scorers in this group.

-Sean Kilpatrick warrants mention as the highest usage player in this group. Using 19.9 possessions per-game and placing prominently in usage in nearly every playtype, Kilpatrick ranked slightly above average in scoring efficiency. He was particularly efficient in limited isolation touches and overcomes his below average overall jump shooting accuracy by scoring 1.307 points per finishing chance to rank 3rd among his peers. Playing against defenses geared to stop him and carrying Cincinnati offensively for long stretches, Kilpatrick's mustered solid efficiency numbers in a huge role with tremendous toughness and intensity.

-Bogdan Bogdanovic ranks as the least efficient player in this group, scoring .865 points per possession overall. Being thrust into a role as a young team's first option against Euroleague competition will do that to you. Bogdanovic gained unique experience creating for himself and others in the half court using more pick and roll and isolation possessions combined per-game than any of his collegiate peers, but also struggled at times with the extensive role he was forced to shoulder.