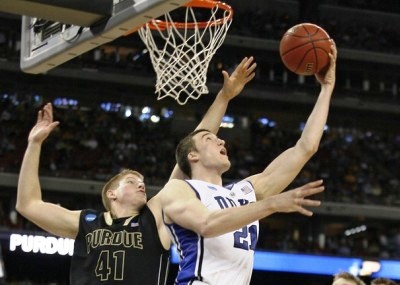 Kyle Nelson
@KNelsonDX
Continuing our coverage of the top returning NBA prospects in the ACC, we check in on Miles Plumlee or Duke, Jordan Williams of Maryland, DeQuan Jones of Miami, Clemson's Milton Jennings, and North Carolina's Leslie McDonald.

In 2009-2010, Miles Plumlee came off the bench alongside his younger brother Mason Plumlee and played 16 minutes per game during the Blue Devils national championship season. This season, with the departures of starting big men Brian Zoubek and Lance Thomas, the Plumlee brothers should have their chance to earn more minutes and showcase their skills for NBA scouts. While junior Miles Plumlee isn't as physically gifted as his younger brother Mason, he has some talent in his own right, and it will be interesting to see how he is utilized this season on a loaded Duke roster looking to win back to back national titles.

Miles Plumlee is able to swing between the four and the five spots at the college level, where he'll likely spend some time alongside his brother in bigger lineups, as well as some time as the lone big man when Coach K elects to go smaller and play Kyle Singler at the four, in order to make room on the floor for his glut of talented perimeter players. Plumlee has good size at 6'10 and is rumored to have hit the weight room hard in the offseason, adding an extra fifteen pounds to his frame to put him up to 245 pounds. He also is a solid athlete who runs the court well for a guy his size and gets off the floor with good elevation.

While Plumlee came into college with the reputation as more of a perimeter four man who liked to float on the outside and was a bit afraid to bang inside, he's really managed to turn that around after his first two seasons at Duke. The 22 year-old junior's increased strength and toughness served him well last season as he averaged an impressive 12.2 rebounds per forty minutes pace adjusted, up from the 8.2 he averaged as a freshman.

Meanwhile as a shooter, Plumlee has struggled a bit, making just 5 of the 20 jump shots he attempted last season. He made some improvement from his freshman to sophomore season, though, increasing his percentages from the field and from the free throw line. He has a fairly soft touch and decent release, but he has a bit of a hitch in it though, and he doesn't always look confident shooting the ball, maybe party because that wasn't a focus of his role on the team last season. Becoming more reliable on open jumpers out to about 17 feet would serve him well going forward.

In the post, Plumlee isn't really a player that the Blue Devils have looked to dump the ball into a whole lot. He prefers to turn to his left shoulder or face up after catching the ball with his back to the basket, and he doesn't seem as comfortable turning to his right shoulder or using his left hand. He may have more opportunities to showcase his post game this season, so that will be something to keep an eye on,

Defensively, Plumlee's strength, toughness, and elevation help him defend in the basket area, but he lacks the lateral quickness to defend dribble penetration and cover big men who operate more on the perimeter. He also has trouble playing hard without fouling, as evidenced by the fact that he was the 4th most foul-prone player in our database last season, averaging 6.4 fouls per forty minutes.

In terms of his pro potential, Plumlee is a guy who has some things going for him with his size, mobility, and the fact that he's playing for a coach who demands energy and toughness at all times. So far, he hasn't had much opportunity to show all that he's capable of, but he'll have two more seasons at Duke to work on his overall game and display that he has ability to fill a role at the next level.

Freshman center Jordan Williams exceeded expectations in his first season at Maryland. He improved throughout the course of the season and he was also an essential component of Maryland's NCAA tournament run including a 21-point and 17-rebound performance in the first round against Houston. After a solid freshman season, Williams will assume a larger role in Maryland's offense and must fill the significant void left in the wake of Greivis Vasquez's graduation.

Williams has good size and length for a post player at 6'10 with an impressive wingspan. His weight, however, is certainly a concern even if he has slimmed down to 255 pounds as reported. Even considering his slimmer frame, Williams is likely a below-average athlete. He runs the floor relatively well, but his quickness in the post is lacking and will certainly be an issue at the next level.

His lack of ideal athleticism stunted him significantly on the offensive end where he averaged 14.7 points per 40 minutes pace adjusted. According to Synergy Sports Technology, Williams was a below average finisher in post-up possessions. Though he has a soft touch around the basket, his lack of explosiveness and quickness really limits his effectiveness as defenders easily alter his shot. Similarly, his lack of established post-moves and countermoves and right-handed dominance do not help matters.

Williams succeeds in the post at this level largely because he is stronger than much of his competition and his size allows him to establish position in the post. His basketball IQ does seem well above average, as evidenced in his above-average passing abilities, suggesting that while his skill set is underdeveloped, he does have potential to continue to improve. He likely will not have a size advantage on a nightly basis at the next level and he will have to improve considerably if he wants to overcome his physical limitations.

Williams is most effective as an energy player at this stage, scoring in transition or via offensive rebounds. He has excellent hands and, though he is fairly limited rebounding outside of his immediate vicinity, he grab 4.4 offensive rebounds per 40 minutes pace adjusted. Similarly, while his foot speed in the open floor is just average, he is fairly mobile for his size and does a good job of scoring in transition. His soft touch helps him significantly as a finisher and is certainly an asset at any level.

He rarely ventured outside of the post, both as a result of his extremely low usage rate within the Maryland offense and his limited skill set. He struggled in pick-and-roll sets, where he was underutilized despite his touch and mobility. He was similarly underwhelming in spot-up possessions boasting truncated mechanics and an ineffective jump shot. It is difficult to even project him as a shooter in the future, especially given his 52.9% free throw percentage.

Williams was not particularly impressive on the defensive end as a freshman, either. His average lateral quickness offsets his strength advantage in the post, as quicker offensive players have little trouble getting around him. He simply cannot stay in front of his man on the perimeter, either, though he does a decent job of closing out on shooters.

He is more impressive on the defensive boards where his length, strength, and soft hands allow him to pull in 8.8 defensive rebounds per 40 minutes pace adjusted. His fundamentals look just average, so his productivity could increase should he improve.

Ultimately, Jordan Williams had a solid freshman season and looks as though he'll develop into a prospect down the road. Not only will he be playing on a lighter frame as a sophomore, but he will also receive more touches with an increased role in Maryland's offense. Scouts will likely remain skeptical of Williams's potential because of his mediocre athleticism and raw skill set, but he will have every opportunity to prove himself this coming season.

Having profiled Jones during our preseason coverage last year, we've elected to wait and see what type of progress he's made with a fresh perspective in a few months since his role didn't expand too much last season.

Having profiled Jennings before his freshman season, we've decided to reassess what type of progress he's made in a few months rather than scrutinizing his development with a small sample of game footage.

Having profiled McDonald before his freshman season, we've decided to reassess what type of progress he's made in a few months rather than scrutinizing his development with a small sample of game footage.
Read Next...