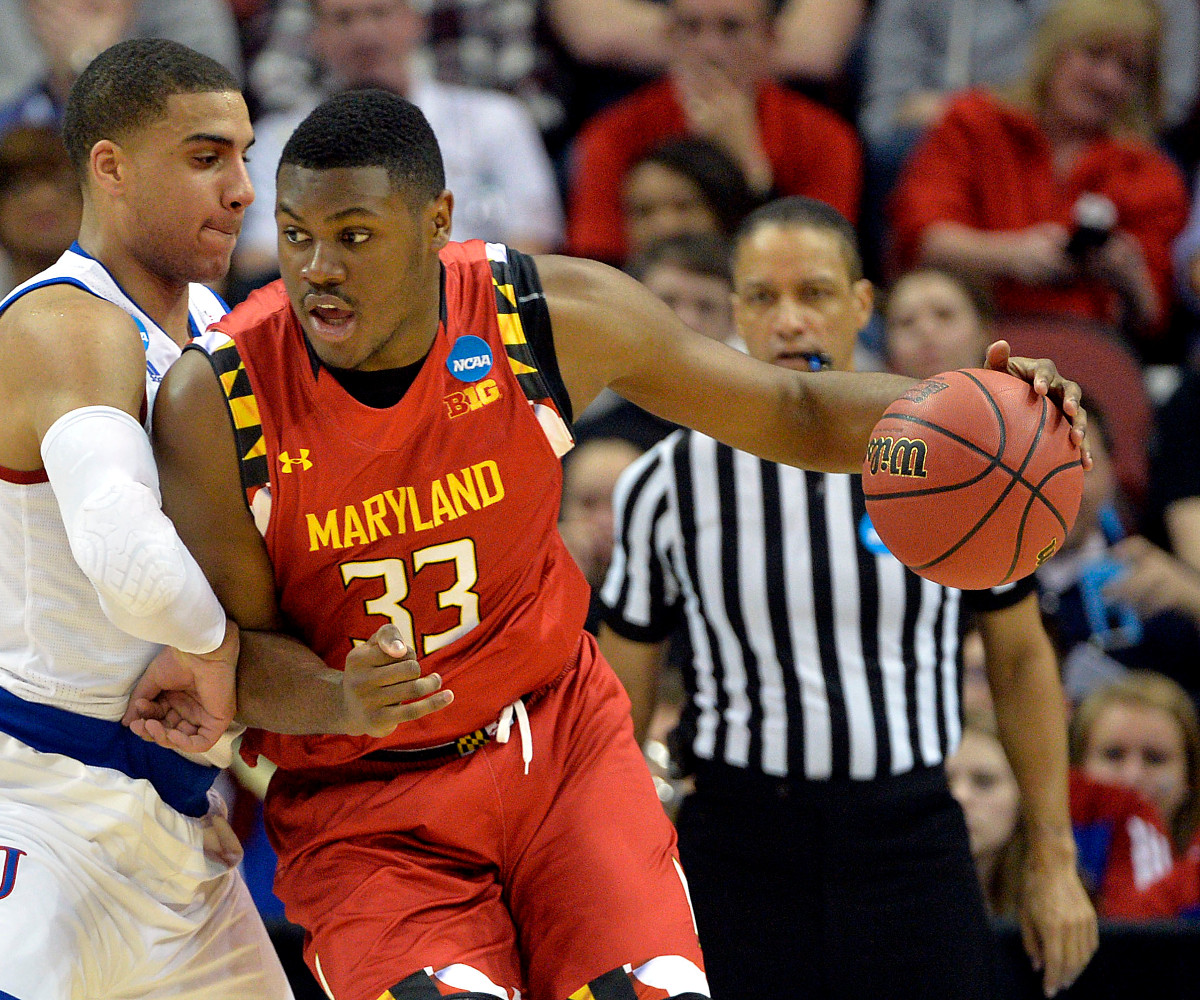 Diamond Stone entered Maryland as one of the school's most highly touted recruits in recent history, ranked sixth by the RSCI. He had an up and down season as many freshman do, but was still named to the Big Ten's All-Conference Third Team as well as their All-Freshman Team. He averaged 22.8 points and 10.2 rebounds per 40 minutes pace adjusted as one of the youngest NBA prospects in college basketball, with Stone not turning 19 until February of this year.

Stone doesn't have elite height for a center, measuring just 6'9 barefoot at the NBA Combine, but more than compensates for that with a gigantic 7'3 wingspan and a strong 254 pound frame. He's not an exceptional athlete, but can certainly hold his own against other similarly built centers, especially considering how strong he is, as he has a wide frame, and is very nimble and mobile for a player with his build.


Primarily a back to the basket option offensively, with over 35% of his possessions ending in post-ups according to Synergy Sports Technology, Stone has grown up operating on the block, but will have to demonstrate how he fits into a modern NBA offense. He likes to hold the ball and work methodically with his back to the basket, using his strength to seal off opponents or back them down underneath the rim. He has a nice array of post moves, displaying excellent footwork on his drop steps and spin moves to beat his man when he couldn't seal them or back them down for an easy basket. He relies more on his touch and footwork around the rim to score rather than an elite level of explosiveness, but has impressive body control and a really advanced feel for operating in the low post.

Still lacking a degree of experience as many 18-year old freshmen do, Stone often struggled to assert his will on the similarly sized big men he matched up, especially those who were also on NBA radars. When he couldn't physically overpower his man or use his reach to shoot over them, he looked less confident in his footwork and struggled to score. Until he can prove he can consistently be a reliable option in the half-court, NBA teams may be reluctant to dump the ball into him on a regular basis early in his career, so he may have to find other ways to score initially.

Accustomed to holding the ball excessively up until this point in his career, Stone can be a bit of a black hole at times, with a one track mind toward a shot as soon as he received an entry pass, which hurt his team's overall offensive efficiency. His 0.7 assists per 40 minutes pace adjusted and his 0.27 assist to turnover ratio both ranked third worst among all prospects in our top 100, while his 4.1% assist percentage ranked fifth.

There are questions about both his willingness to pass and his feel for the game as he failed to see open teammates when the defense doubled him. He certainly had talented teammates around him that he could kick out to, but he failed to deliver the ball which often made his teammates visibly frustrated. He has to become a more willing passer at the NBA level with the far more complex team defensive schemes we're seeing, especially since he's unlikely to emerge as a primary option early in his career.


Stone didn't take a ton of jump shots during his time at Maryland, but he did display some touch and accuracy in a small sample. These shots came in the form of face-up jumpers from eight to ten feet or mid-range jumpers from the foul line. An ability to stretch out the midrange and possibly even the three point line will help him contribute offensively when he can't score in the post. This may not come right away but could develop over time as he matures as a professional player, and would go a long way in helping him finding a long-lasting niche.

Stone was an average defensive rebounder in his lone collegiate season with his 6.1 rebounds per 40 minutes pace adjusted ranking last among centers in our top 100. He wasn't that physical of a rebounder and didn't attack the defensive glass to pull down the loose ball. It's possible that playing in a two big lineup stunted his numbers, but he will have to be more competitive and show more of a passion for rebounding as a center in the NBA, especially since he's unlikely to be an offensive focal point early on in his career.

As an individual defender, Stone showed some potential when challenged directly, but his overall effort level and instincts left much to be desired. When guarding a post player, he has the strength and reach to defend a close range shot, but too often plays with a lack of toughness and physicality by getting pushed under the rim or allowing his man to freely get to his spots on the floor. While he can make some plays when directly guarding the ball, off the ball he is a major liability, as he lacks the focus and awareness to be a consistent team defender by moving his feet to help out his teammates.

Stone's length and solid instincts allowed him to emerge as a solid shot-blocker as a freshman in on-ball situations, blocking 2.9 shots per-40 minutes, but he still has a ways to go to improve his help-side defense and overall become an effective paint and rim-protector. He struggles to hedge or switch screens out on the perimeter, lacking the sense of urgency needed to compensate for his average lateral quickness and explosiveness. Stone will have to improve his defensive instincts and effort to work his way into a NBA rotation early on, which will require becoming highly attentive at picking up schemes, and much more fundamentally sound than he needed to be up until this point in his career.

There's certainly a role for Stone in the NBA, as players of his size with advanced scoring instincts certainly don't grow on trees, and this may be enough to warrant a team selecting him in the first round. However, he will need to polish and diversify his offensive skill set, while becoming a much more consistent defensive and rebounding presence, to break through at the next level. He is the fifth youngest player in our top-100, and while he is very much a work in progress, he will be given ample opportunity to improve and grow as a pro prospect. Much will depend on how hard Stone is willing to work and how coachable he proves to be, as he certainly has the talent to be an effective NBA player, even if the style of play we're seeing among teams in modern basketball doesn't favor him at the moment.
Read full article

DraftExpress
@DraftExpress
Elite 2015 big man Diamond Stone measured in at 7'0 in shoes with a 246-pound frame and a solid, but not spectacular 7'3.5 wingspan. Though he has a shorter standing reach, Stone is almost exactly the same size as Karl Towns was when he was measured at the Nike Hoop Summit this spring, considering Stone measured 6'10 in shoes around the same weight last summer, it will be interesting to see how he measures out on the All-Star circuit eight months from now.
Read full article