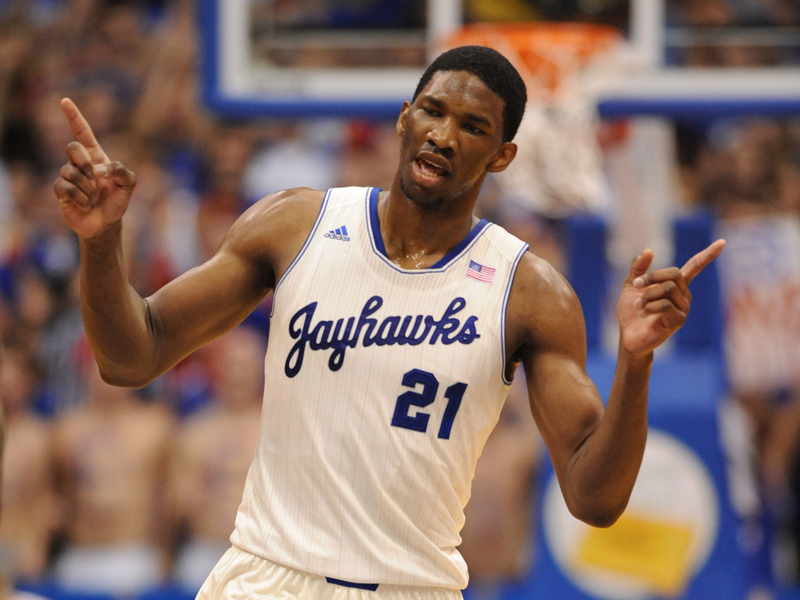 Matt Williams
@DraftExpress
The main attraction in this group, Joel Embiid, lives up to his billing as an elite center prospect on paper. In studying Embiid's situation statistics, his terrific instincts for scoring are obvious, though his lack of experience is equally as clear in a few areas.

Looking at the bigger picture, although Embiid averaged a slightly below average 10.5 possessions per-game playing a smaller offensive role than some of his peers, he ranks as the 3rd most efficient scorer in this group having averaged 1.026 points per possession a year ago. He drew free throws on a top-ranked 27% of his possessions, as his size and footwork were often overwhelming for opposing centers at the college level, but also turned the ball over on a group-leading 22% of his possessions, appearing a bit green at times with his decision-making in the half court.

Embiid did most of his damage this season scoring in the post, ranking 2nd among all players on this list with 49.3% of his possessions coming on the block. He ranks an impressive 2nd in this group, scoring .95 points per-post up possession, making 54.9% of his attempts with his back to the basket. Embiid was most effective spinning baseline where his size allowed him to get his shot off fairly effortlessly when he didn't have an angle to take the ball all the way to the rim. He has room to refine his post moves, but he had some flashes of brilliance a year ago scoring one-on-one down low.

Similarly, Embiid was also impressive as a jump shooter and finisher at times. Though Embiid attempted only 11 jump shots this past season, sinking 7 of them, he flashed intriguing touch when defenders gave him space in the midrange and when facing up. Though he took a sample-low 2 shots per-game in finishing situations in the half court, Embiid shot a 2nd ranked 72.9%, thriving in cut and put back situations.

Kansas ran very little pick and roll, as Embiid averaged a mere .4 possessions per-game as the roll man last season, finishing ahead of only Sim Bhullar. He only scored .73 points per possession on those select few opportunities, which stands in contrast to how effective he was around the rim overall. While it is safe to assume sample size has something to do with Embiid's limited efficiency in the two man game, he has plenty of room to gain experience operating on the pick and roll given how infrequently he was involved in it in the Jayhawk offense relative to how big a part of the NBA basketball it has become.

Though Embiid entered this season with plenty of hype, some of the things he showed offensively simply aren't common among freshman centers, regardless of how highly touted they are. His overall efficiency is impressive, which coupled with the coordination and skill he flashed at times, make it easy to see why he's viewed as the likely number one overall pick, even if he's still early in his development curve.
Read full article

DraftExpress
@DraftExpress
Footage of Joel Embiid working out in preparation for the 2014 NBA Draft.

Mike Schmitz
@Mike_Schmitz
A detailed video by Mike Schmitz analysis of how Joel Embiid performed in his matchups against the three most physically gifted centers he faced this season, Isaiah Austin of Baylor, Patric Young of Florida, and Cameron Ridley Texas. We examine the strengths of weaknesses of each prospect first and then see how Embiid actually fared.

Take a look at our brand new video section for a compilation of all the videos we've produced this year.
Read full article

Embiid's Kansas squad is still finding their way as a team, having lost three of their last five games, but still have plenty of time to come together with a challenging schedule in front of them the next three months. 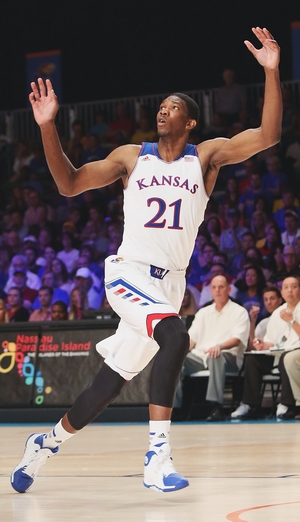 Playing on some of the biggest platforms of college basketball thus far has given us ample opportunity to evaluate Embiid's very distinct strengths and weaknesses as a prospect, which we've done in the following video scouting report courtesy of Mike Schmitz.

DraftExpress
@DraftExpress
Joel Embiid from Cameroon talks with Jonathan Givony of DraftExpress about learning to play basketball, his recruitment out of Africa, working with Andrew Wiggins at Kansas, and his future plans for the NBA. From the 2013 adidas Nations.

Hampered by back spasms throughout the week, Joel Embiid (#28 ESPN, #61 Scout, #25 Rivals, #31 24/7) still managed to put together a nice showing in Portland. Invited to the Hoop Summit after a strong showing at the Jordan Brand Classic, the 7-foot center has only been playing the game for a few years, and while he remains raw, his upside is obvious. 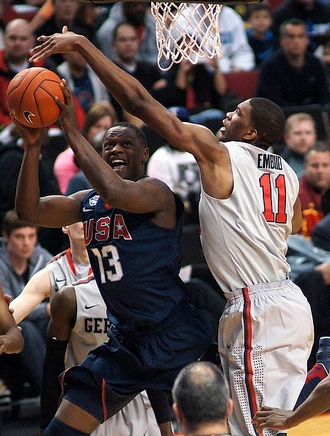 Standing out at first glance with his 240 pound frame and 7'5 wingspan, Embiid looks the part of a NBA center. Very new to the game of basketball, the Kansas commit has a limited feel for how to make his presence felt consistently, and doesn't always know his limitations, but flashed some intriguing tools on both ends of the floor, even though he wasn't at 100%. Knocking down a 20-foot jump shot, making a nifty move to score a left handed hook shot in the post, and putting in some impressive efforts on the offensive glass, Embiid has some unique skills for a player only beginning to pick up the nuances of the game.

On the defensive end, Embiid is a talented shot-blocker who has the tools to become an excellent defender on the ball and rotating over from the weak-side down the road. The Basketball Without Borders product is a bit foul prone and could stand to be more aggressive pursuing the ball off the rim, but his timing was impeccable at certain moments in practice.

Noted for developing big men, the Kansas staff landed an ideal long-term project in Embiid. If he can get stronger and continue developing as an interior scorer, rebounder, and defender, it would not be surprising to see Embiid emerge as an extremely interesting NBA prospect down the road and a valuable contributor for the Jayhawks as they look to replace Jeff Withey.
Read full article