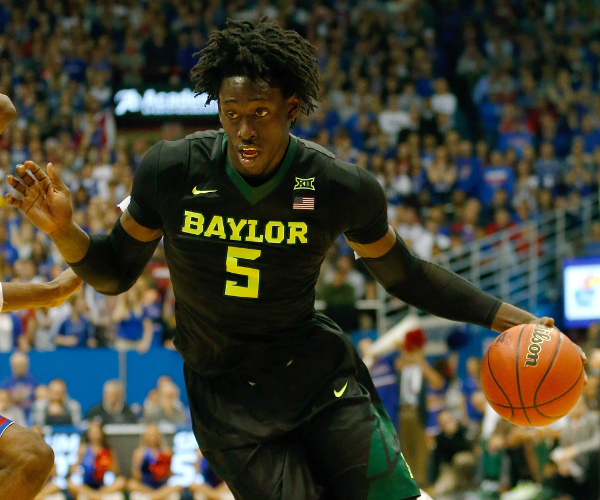 Ryan Thomson
@rthomson9
After three successful seasons in Waco, Texas, Baylor redshirt junior Johnathan Motley declared for the 2017 NBA draft just weeks after undergoing surgery to repair a torn meniscus. Posting per 40 minute averages of 22.4 points, 12.8 rebounds and 1.5 blocks on a 56.9% true shooting percentage while earning First-Team All-Conference honors in the Big 12 proved to be enough for the 22-year-old to make the NBA leap. Despite not being quite ready to compete in the 5-on-5 portion of the NBA Combine, Motley was measured and is now currently conducting workouts, where he's able to show teams his impressive physical profile.

Although somewhat caught between the four and the five and a shade undersized at 6'9, Motley has a tremendous 7'4 wingspan to go with a 9'0 standing reach (which may be even higher as 9'0 is the lowest of the four measurements we have in our database). Motley certainly has the length and frame to play the ever popular small-ball center position in today's NBA, even his explosiveness and height aren't quite elite for the position. The Houston native does, however. have the defensive agility and budding skill set to play the four in more traditional lineups. His agility and tools are most apparent on the offensive glass, as he averaged an impressive 4.8 offensive boards per 40 minutes during his junior season.

A versatile offensive player, Motley has shown an ability to do impact the game on the offensive end in a number of ways for the Baylor Bears. Thanks to his length and solid touch, Motley was a sound finisher at the NCAA level, shooting 62.1% on all shots around the basket (82nd percentile according to Synergy Sports Technology). He has struggled at times against NBA level length as he needs time and space to finish above the rim, but he found a way to be productive in the Big 12 around the rim.

Motley isn't the most polished offensive player in this years' draft class, but he has shown an ability to make plays from the low block, scoring 0.89 points per possession, which ranks him in the 71st percentile of qualified collegiate players. Motley likes to get to his right hand, but is comfortable making jumpers and fadeaways over either shoulder, using his length to create enough space to get his shot off, despite how unorthodox it may look at times.

With the increased importance in perimeter-oriented skills among modern NBA bigs, Motley becomes an intriguing prospect in that he has shooting potential and the ability to put the ball on the floor in a straight line. He's agile and improved as a passer (career-high 2.9 assists per 40 minutes) but he still doesn't think the game at a super high level as he gets caught trying to do too much at times, forcing the issue or making low IQ passes - as evidenced by his 3.8 turnovers per 40 minutes. Motley has a tendency to get sped up making plays, especially out of pick and roll, where he ranked in the 21st percentile among qualified players. Motley's issues in the pick and roll are two-fold in that he struggles to finish in traffic, he shot only 27.8% on all rolls to the rim, which ranked him in the 2nd percentile, and he is an inconsistent decision maker and jump shooter. As a junior he made only 8 of his 31 attempts from three-point range, forcing attempts as a pick and pop big rather than making the extra pass.

With that said, Motley has made considerable strides as a perimeter shooter during his time in Waco. Despite shooting only 3-of-17 from 3-point range during his first two years, Motley showed that he's at least capable of making shots with time and space, and could certainly develop into an occasional stretch threat down the road, as the ball comes out of his hand nicely with good rotation, something he's increasingly shown during the pre-draft workout process. Although he's still not quite polished enough to be in the skilled big category, there's enough there skill wise to intrigue teams drafting in the late first or early second round.

On the defensive end, Motley is a bit of a mixed bag. He has the physical tools to become an impact defender, but having played quite a few minutes of zone while at Baylor has not helped his development in guarding multiple actions. When Baylor did matchup man-to-man, Motley had some struggles reacting quickly off the ball, often over-engaging on drives and sometimes losing shooters on the weakside. It figures to be a bit of an adjustment for Motley, but he does have the length and agility to be a factor down the road. He's fairly light on his feet and has some switch potential as he becomes more comfortable on the perimeter.

At the rim, Motley has length that suggests he should be a consistent deterrent, but his average timing and understanding of how to challenge shots without putting himself out of the play held him back a bit, as he posted a career-low 1.5 blocks per 40 minutes as a junior. Motley can also add a degree of toughness as a post defender as he doesn't always use his strong frame and long arms like he could. His defensive intensity could certainly use some work, but Motley was able to improve considerably on the defensive glass, an area where he struggled early on in his career. Having averaged only 3.7 and 5.4 defensive rebounds as a freshman and sophomore, respectively, Motley upped his production to 8.0 per 40 minutes, showing improved timing and instincts in that regard. He still has his lapses and his below average standstill leaping limits him at times, but his upped production is certainly a welcomed sign moving forward.

Motley's overall consistency moving forward is an area to monitor, as his intensity wavered during his time at Baylor. With that said, it's hard not to be intrigued by his impressive physical profile, agility, flashes of skill and stretch potential, even if he still has a ways to go with his decision making. He may not have one skill he can consistently hang his hat on the NBA at this stage, but there's enough long-term intrigue as a stretch, switchable big for Motley to garner interest in the 20-40 range.
Read full article

Ranking among the top-100 or so recruits in the high school class of 2013, Johnathan Motley emerged as a starter for Baylor, averaging 7.8 points and 4.2 rebounds over 21.4 minutes per-game as a redshirt freshman. Though Motley struggled at times, he also turned in a number of impressive performances, gaining valuable experience a year ago, while flashing interesting potential. 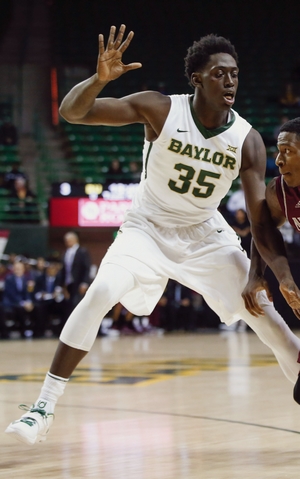 Motley's upside starts with his impressive length and athleticism. Our last official measurements taken over 3 years ago between his junior and senior year of high school had him at 6'7.5 with a 200-pound frame and a 7'3.5 wingspan. Using his redshirt year to work on his body, Motley is currently listed at 6'9 with a 230-pound frame. His wingspan likely hovers around 7'4 or more. Though the improvement in the young power forward's frame is unmistakable, he still needs to continue adding muscle as he got pushed around at times a year ago. A bouncy, mobile athlete whose length allows him to effortlessly play above the rim, Motley has a nice base of physical tools to build on.

Offensively, Motley was asked to play a surprisingly post-up heavy role for balanced offensive team that ranks among the more imposing offensive rebounding lineups in recent memory. More than one-third of his possessions came in one-on-one situations on the block, as he accounted for almost half of the Bear's total post up possessions according to Synergy Sports Technology, although he only finished as the team's fifth leading scorer.

Shooting only 36% in the post, Motley did a nice job battling inside, but is still early in his development as a one-on-one scorer, as his lack of touch, strength, and polished post-moves limited his effectiveness. He relied heavily on his right handed hook shot, which is still a major work in progress. It took Corey Jefferson three years to find his touch and blossom as a post option under Scott Drew, and it will be interesting to see if Motley ultimately follows a similar trajectory.

Outside of his post game, Motley had some nice moments finishing around the rim, especially in transition where his long strides made him one of the more promising rim-running big men in the college game. In the half court, Motley struggled a bit with his efficiency as he appeared rushed to get the ball up on the rim at times, and was prone to getting pushed off balance by defenders looking to use his lack of strength against him. Shooting just 49.4% as a finisher in the half court, Motley's numbers take a hit because of how frequently the Baylor big men played volleyball on the backboard amongst themselves offensively, but even so, he still has a lot of room to improve his ability to convert consistently inside.

Away from the basket, Motley attempted around one jump shot per-game, but converted only 25% of his looks from the perimeter and 64% from the line. He will need to tighten up his mechanics if he wants to be a weapon from the mid-post and beyond. He can be a bit turnover prone when he tries to do too much, but also faced quite a few double-teams for a player so early in his offensive learning curve.

At this stage, there's two things Motley does at a high level. First, he's a very good offensive rebounder, especially when his motor is running hot. His length allows him to get his hands on caroms that other players simply can't at the college level. His 4.3 offensive rebounds per-40 minutes pace adjusted is particularly impressive when you consider he's playing alongside Ricardo Gathers, who is arguably the best offensive rebounder in the country.

Second, Motley is a nice rim protector playing on the side of Baylor's 2-3 zone. His length and aggressiveness allowed him to make an impact altering shots at times, but also got him into foul trouble as well. Possessing outstanding foot speed for his size, Motley has intriguing defensive potential at the next level even if he won't have played much man-to-man at Baylor. He lacks discipline closing out on the perimeter at times, but changes direction well and could be a standout, multi-positional defender down the road if he retains his impressive quickness as he adds strength.

Thrown into the fire a freshman, Johnathan Motley performed fairly well for a Baylor team that ultimately fell victim to R.J. Hunter's timely shooting in the NCAA Tournament, even if he was clearly rough around the edges. He should play a similar role for the Bears this year as they figure to be a staple of most Top-25 polls once again. Motley is a player who may not factor into the draft in the short term, but his physical tools, effort and defensive potential give him a lot of promise and make him a player worth monitoring as he develops.
Read full article