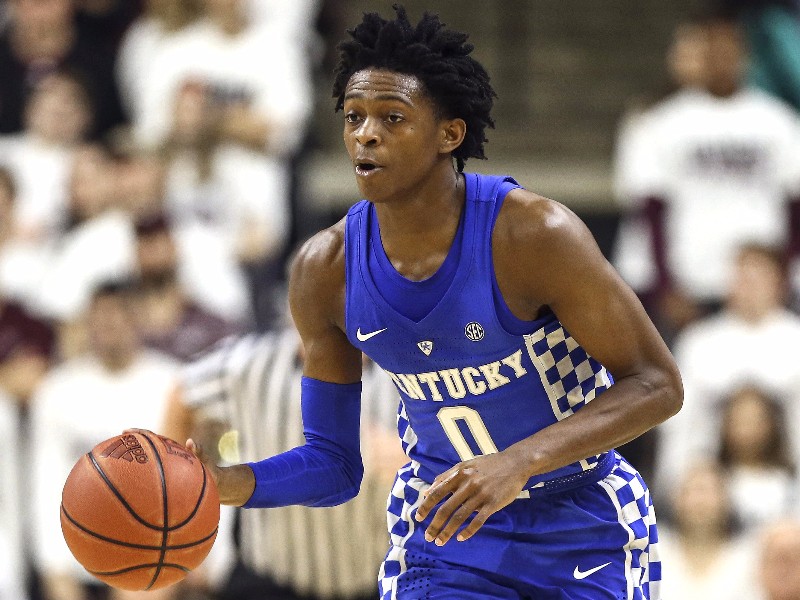 Jonathan Givony
@DraftExpress
When do the top college prospects for the 2017 NBA Draft take the floor on Friday for the NCAA Tournament Sweet 16? What will NBA scouts be looking for?

An undersized Butler team will have their hands full with North Carolina's outstanding frontcourt, which leads the nation in offensive rebounding percentage. Butler had a relatively calm path to the Sweet 16, defeating #13 seed Winthrop and #12 seed Middle Tennessee State, and NBA scouts will want to see how their most productive player, Kelan Martin, handles the likes of Justin Jackson and Isaiah Hicks on both ends of the floor.

Freshman point guard Kamar Baldwin has quietly emerged as Butler's best NBA prospect and has a nice skill-set on both ends of the floor that he can grow into over the next few years. What he lacks in elite physical tools, he makes up for with toughness defensively, as he has extremely quick feet, great instincts and the ability to put tremendous pressure on the ball. Baldwin has shot the ball well all season (38% for 3) and has been efficient inside the arc (55% 2P%) as well. It will be interesting to see how he looks next season with senior point guard Tyler Lewis out of the mix, which should put the keys to the offense in his hands. Baldwin has room to improve his ball-handling skills, decision making and all-around polish, but he has a few things going for him and this should be a really nice test for him going up against the likes of Joel Berry, Theo Pinson and Nate Britt.

SEC player of the year Sindarius Thornwell willed South Carolina to an improbable upset of Duke in front of a friendly crowd in nearby Greenvile, behind a terrific 24 point, 6 rebound, 5 assist effort. The stakes rise even higher as he'll matchup with Baylor wing Ishmail Wainright in Madison Square Garden, in a game that will be watched closely by NBA scouts.

South Carolina likes to use Thornwell in a variety of ways, operating anywhere from point guard to power forward. His powerful first step and chiseled frame make him an ideal candidate for elbow catches, short-corner isos, and downhill catches off DHOs, all of which will come in very handy against Baylor's zone defense, which they employ frequently. Thornwell is not the quickest or most explosive athlete you'll find in the college ranks, relying heavily on his strength to help overpower weaker defenders and bulldoze his way to the lane and draw fouls. He relishes contact around the basket and is a handful for opposing guards or wings to deal with his powerful spin-moves and outstanding footwork. He's a career 43% 2-point shooter, a very poor rate, but makes up for that with his ability to get to the free throw line (8.3 times per-40), where he converts 83% of his attempts.

The biggest revelation this season has been Thornwell's jump-shot, which has become a far more consistent weapon compared to earlier in his career. He still doesn't rely on it very heavily (just 32% of his attempts come from beyond the arc), but he's hitting 40% of his 3s on the season, which is much higher than his career average (34%). His mechanics leave something to be desired, as he shoots quite a flat looking jumper, especially pulling up off the dribble, with a handsy release, that make you wonder about how effectively he'll be able to extend his range out to the NBA line.

Still, it's tough to ignore the sheer productivity Thornwell is amassing at the college level, and he is certainly a two-way player who brings great toughness to the defensive end (as well as a long 6'9 wingspan). In today's positionless NBA, scouts may wonder if he can potentially operate as a small-ball muti-positional forward in the Jae Crowder mold.

It will be interesting to study his matchup with Baylor small forward Ishmail Wainwright (who has a similar type of frame), as he won't be able to simply bully him like he did to Duke's guards, wings and forwards. Will he see any minutes matched up with power forward Johnathan Motley, a chiseled big man with a freakish wingspan?
Motley is undoubtedly the best prospect in this game, and will be asked to produce as such.

Perhaps the most highly anticipated game of the entire NCAA Tournament, at least from a scouting standpoint, this rematch is the clear-cut highlight of the weekend for both professionals and casual fans.

The matchup at point guard between potential top five picks Lonzo Ball and De'Aaron Fox was outstanding in the first game in Lexington in December, and should be even more interesting now as both players have 30+ college games underneath their belt.

Scouts will also be keeping a close eye on T.J. Leaf, who continues to be a lightning rod of a prospect, with no clear consensus from talent evaluators. Naysayers point to his shockingly poor splits, which indicate that he struggles mightily against quality competition, while putting up tremendous numbers against woefully overmatched opponents. Supporters are quick to bring up his game against Kentucky in December, where he had 17 points, 13 rebounds and 5 assists and was likely the catalyst behind UCLA's upset win in Lexington. While Kentucky is clearly weakest defensively at the power forward spot, something that has been their Achilles heel all season, this will still be an important game for Leaf to make the case that his lack of length and quickness won't rule him out from having a strong career at the NBA level, and that the tiny sample size of his 3-point shooting (less than one make per game) aren't a cause for concern.

Bam Adebayo really struggled in his minutes against Ike Anigbogu in the first matchup against UCLA, and will be looking to have a stronger showing this time around. While Adebayo was able to assert his will on Thomas Welsch due to his superior physical tools, Angibogu was able to neutralize him and found quite a bit of success in transition and the offensive glass. It will be interesting to see how this matchup plays out this time around, as Anigbogu is no longer a secret and will figure prominently on Kentucky's scouting report.

Devin Robinson is coming off a superb weekend, posting 38 points and 18 rebounds in 64 minutes, while making 4/9 3-point attempts to help Florida advance to Madison Square Garden. He has a much bigger challenge on his hands in the form of long-armed forwards Nigel Hayes and Vitto Brown, as well as a stalwart interior presence in Ethan Happ. Consistency hasn't been the theme of Robinson's career, to say the least, so it will be interesting to see how productive he can be in arguably the biggest stage he's ever played on. Scouts are enamored with his size, length, frame, athleticism and the sparks he demonstrates as a shooter and defender. With that said, his fundamentals, feel for the game, and intensity have always been dragging behind his pure talent level, and talent evaluators will want to get a better gauge on whether he's actually turning the corner now that he's turned 22 years old, or if last weekend's outburst was a flash in the pan and a product of his physical superiority.
Read Next...