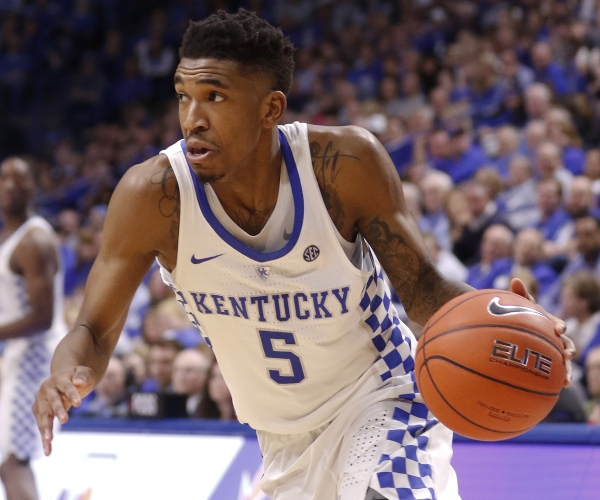 Mike Schmitz
@Mike_Schmitz
One of the most electric players in all of college basketball, Malik Monk is a highlight waiting to happen, and he proved to be the perfect backcourt mate next to Fox thanks to his ability to get buckets off of quick-hitting actions. It's important to know what you're getting in Monk, however, as drafting him as a lead guard of the future could end poorly - his mentality has always been of the score-first and score-second variety, even if he's shown some improvement out of ball screens.  He's likely more Zach Lavine, Lou Williams, Monta Ellis than Bradley Beal in terms of style, at least at this stage of his development. Monk is best next to a big point guard who can run the show, and has the size to defend twos, as the Bentonville, Arkansas native lacks the ideal physical tools to check most shooting guards.

Elfrid Payton fits that description, and the Orlando Magic are in dire need of shooting, which could make this a decent marriage for newly appointed executives Jeff Weltman and John Hammond. A lineup of Payton, Monk, Ross/Hezonja, Gordon, and Biyombo/Vucevic, while still not ideal, is certainly intriguing, and Monk would give the Magic the potential 20 point per game scorer it currently lacks.

Whether the Magic are high enough on Monk to take him at six is definitely in question, however, as it appears that Jonathan Isaac has established himself as a top-six player in this draft. Monk could fit next to a bigger, defensive-minded guard, like Kris Dunn (who has some similarities to Payton), but will he defend enough to stay on the floor for Tom Thibadeau? He's also a bit redundant to a LaVine, who is on the last year of his rookie deal next season. That leaves New York, an unpopular destination for any young player nowadays.

Monk would be a fan-favorite next to Porzingis in the Garden, actually fits the Triangle somewhat in that he's best off the ball, and would give the Knicks a perimeter scorer that it's clearly lacking. But for Monk's sake, his lack of point guard skills and so-so decision making could be exploited early on if forced into a high-volume situation, and his defensive habits on a likely losing team don't figure to improve early in his career. Monk may be best sliding to an organization like Dallas that has a coach like Rick Carlisle, who will find creative ways to utilize him as he's had success with players in a similar mold in the past - see Monta Ellis, Jason Terry, Devin Harris.

Monk is a walking bucket and a high level transition athlete, but he'll need the personnel surrounding him to mask some of his shortcomings.
Read full article

Mike Schmitz
@Mike_Schmitz
Mike Schmitz analyzes Malik Monk's memorable 47-point performance in Kentucky's CBS Sports Classic victory over North Carolina at the T-Mobile Arena in Las Vegas. Monk is averaging an impressive 21.9 points per game while shooting 42% from beyond the arc on 8.2 attempts per game through 11 games this season.

Mike Schmitz
@Mike_Schmitz
Mike Schmitz takes a closer look at Kentucky guard Malik Monk's breakout performance against Michigan State in the Champions Classic at Madison Square Garden, where he made a barrage of 3-pointers.

The explosive 6' 4 shooting guard earned Global Challenge MVP honors and was far and away the most productive (and exciting) prospect on the floor each and every game. Monk averaged nearly a triple double per 40 minutes pace adjusted  29.6 points, 9.9 rebounds, 8.2 assists  while shooting 62.2% from two and 46.2% from three (8.8 attempts per 40 pace adjusted).

Monk scored at least 20 points every game while hammering home a handful of highlight dunks, distributing at a high level and making shots both off the dribble and the catch. Monk has long been lauded for his explosive leaping ability and transition play, but what stood out most was his passing instincts and shot making ability. While he doesn't have the most pure stroke, Monk is very capable when he catches in rhythm (12-of-26 from international three at Global Challenge). He's not as good off the bounce, but he isn't pedestrian in 1-2 dribble pull up situations.

Monk also showed solid ball skills, utilizing crossovers, behind the back dribbles and occasional change of speeds to get into the lane and finish at the rim or drop in a floater before the backline defender could step up and help.

As a distributor, Monk pushed the break and found rim runners in transition, hit the roll man in the pick and roll from time to time, and did an excellent job knifing his way into the defense and dropping it off to the big at the rim as the weak side defender rotated.

Monk was extremely productive and impressive offensively, but some of his warts were still apparent at times during his barrage of scoring and playmaking. Monk has a tendency to break off plays, over-dribble, and take low-percentage shots in the lane  even though he made a lot of them during his four games at Nike Global Challenge.

While Monk can really pass, he's also a bit of an assist hunter, only giving it up when he knows he's in line for an assist, rather than constantly moving the ball ahead in transition or making the fundamental swing pass to shift the defense. If Monk is able to keep up his distributing and shot making, while playing unselfishly and staying away from the hero ball plays, he'll be a much more valuable long-term NBA prospect.

Defensively, Monk has the tools to be very good given his elite quickness and solid frame, but he tends to focus on leaking out in transition rather than staying in front of his man. Overall, Monk played about as well as possible during his four games at Global Challenge, while making strides in two areas that are very important for his future development  perimeter shooting and decision making/playmaking.
Read full article

DraftExpress
@DraftExpress
Malik Monk has a tremendous 8'7.5 reach despite measuring just 6'1.75 without shoes. His 6'7 wingspan is impressive for a player his size. He's gained some 15 pounds over the last 2 years, going from 159 to 175 pounds, but still needs to continue getting stronger.
Read full article