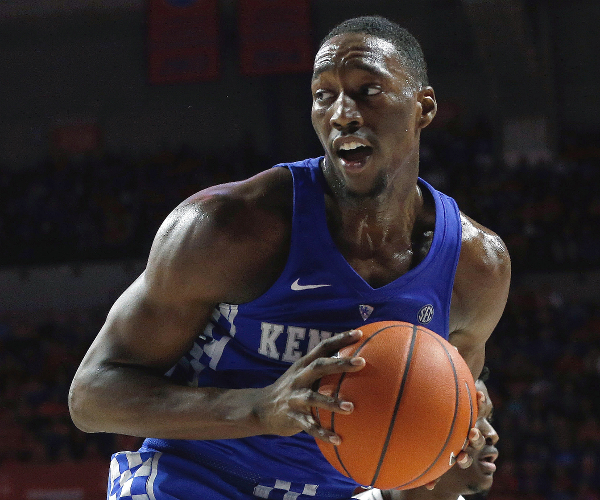 Edrice Bam Adebayo was productive in his freshman season with his 17.3 points and 10.6 rebounds per 40 minutes, earning him a spot on the SEC All-Conference Second Team. He was plagued by inconsistency at times, but it was no surprise that Adebayo chose to declare for the NBA Draft and follow in the footsteps of the ever-growing list of one and done Kentucky frontcourt players.

Measuring 6'10 with a 7'3 wingspan, Adebayo is a shade undersized for a center, but has the length and athleticism to compensate, as well as a chiseled frame that will allow him to hold his own against NBA big men from day one. He also possesses impressive mobility and agility for his size, which he uses to be the first big man down the floor in transition or switch onto guards in the half-court, and impressive quickness and explosiveness which give him good potential to grow into defensively and as a rebounder, although his small hands and less than ideal reach do hamper him at times here.

Here's a closer look at the strengths Adebayo displayed throughout his time at Kentucky:


At this point, Adebayo's offensive game is unrefined, doing most of his damage around the basket, where he finished 66% of his attempts according to Synergy Sports Technology. He has good hands and is very quick off of two feet, where he looks to dunk every shot possible. He lives off the shot creation of others, both from cuts to the rim or pick and roll dives, making him a strong paint presence when he is engaged and active. He didn't have a big sample of ball screen possessions, but with his willingness to set solid screens and potential as a lob threat on rolls, these play types will definitely be a big part of his role in the NBA.

Adebayo is highly productive on the offensive glass, pulling down an impressive 4.1 offensive rebounds per 40 minutes and this is his most NBA ready skill that he has to offer. He uses his strength to carve out position and has a good nose for the ball to track down rebounds. He prefers to play above the rim on putbacks for dunks and tip-ins, and isn't as quick off the ground with his second jump as with his first, struggling to finish in traffic at times due to his below average standing reach. He also has a tendency to bring the ball down below his waist to gather himself and he will likely need to work on keeping the ball high against the quicker hands in the NBA. With his strength and aggressiveness, he is able to shed defenders and finish above the rim through contact, with his 8.2 free throw attempts per 40 minutes ranking third highest among centers in our top 100. Still, there are question marks about how his bully ball style will translate versus better competition, when everyone is just as big, strong and athletic as he is.

The development of Adebayo's skill-level will be a significant factor in his ability to carve out an important role in the NBA. At Kentucky, he wasn't all that effective offensively outside the paint, with his 65% free throw percentage and poor jump shooting numbers indicating he has a ways to go to develop his shooting range. He had a tendency to play outside of himself at times this year, settling for tough shots or trying to create from the high post, which can lead to some ugly possessions. His shooting mechanics aren't bad, so the right team could unlock some offensive potential by helping him expand his game away from the rim, but he will need to make some strides in his skill set to reach that point.

Adebayo has shown some unique ability defensive potential with his combination of strength to guard the post as well as the lateral agility to switch on ball screens and stay in front of guards. This gives him some nice versatility to build off, with many NBA teams leaning on their big men to become more and more adept at guarding multiple positions while being comfortable switching screens.

When Adebayo is engaged defensively, he is an active and impactful defender who can protect the rim in small doses while also being able to step out and guard the perimeter. The key to translating that to the NBA level is learning how to play with a high level of energy and focus every defensive possession. That level of intensity wasn't always there for him during his freshman season, but is something he'll have to improve on to carve out a role and reach his full potential on that end of the floor.

Here's a closer look at the weaknesses Adebayo displayed throughout his time at Kentucky:


There are several concerns about Adebayo's defensive profile, most notably in his rim protection and defensive rebounding. He's never been an elite defensive rebounder, finding far more success typically on the offensive glass. This was especially true in his one season at Kentucky, with his 6.5 defensive rebounds per 40 minutes ranking near the bottom of centers in our top 100. He has the strength to control the glass, but doesn't always find a body to box out before attacking the loose ball, and will need to improve his awareness to become more productive here, an area where he will surely be asked to contribute more in the NBA.

Adebayo has also struggled as a rim protector and blocked only 2.0 shots per 40 minutes as a freshman. His below average standing reach hurts right him off the bat and his awareness is also a work in progress, which limits his ability to react to things on the floor and make the right rotations. Not being a strong defensive rebounder or rim protector could severely limit his value on that end of the floor, so he'll have to do everything he can to maximize his efforts in these areas.

At only 19 years old, there's plenty of time for Adebayo to polish his skill-set on both ends of the floor and become a better-rounded contributor. That said, he will need to be willing to accept a role at the next level, most likely as an energy big man. That will include bringing a consistently high level of aggressiveness, focus and intensity on both ends to help him do all the little things a team needs to win games. If he is willing to embrace that, he's got a nice foundation in place to become a valuable two way big man.
Read full article

DraftExpress
@DraftExpress
A top-15 player in the class of 2016, Edrice Adebayo has made an impression here with his tremendous athletic ability. He's a bit stuck between the four and five spots standing between 6'9 and 6-10 with long arms, even if he's currently lacking a degree of skill, but is an efficient, and highly productive big man. Able to play well above the rim with ease, the Northside HS (NC) standout looks to tear the rim down every time he touches the ball inside. Shooting 68% while scoring 15 points and pulling down 8.9 rebounds per game on the adidas Gauntlet circuit for Team Loaded NC, Adebayo is a physical interior presence not unlike NBA player J.J. Hickson. Making an impact on the glass, competing, and even tossing in a hook shot, Adebayo isn't particularly polished at this stage, but he's one of the main reasons this US Select Team is undefeated through two games. His tremendous frame, athleticism and motor makes him extremely intriguing as a long-term NBA prospect, and once his feel for the game and skill-level improves, he has a chance to establish himself as one of the best big men in his high school class.‎
Read full article