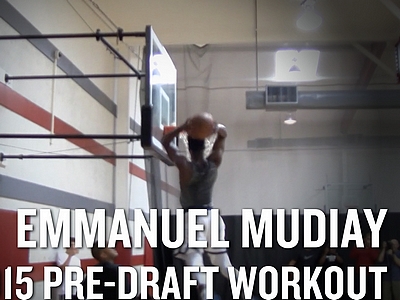 Although it is still extremely early in the season, and obviously premature to draw too many long-term conclusions, it is always interesting to study the steep transition young players are forced to make at the beginning of their NBA careers. This can teach us not only about what these players need to improve on as they gain experience and become more comfortable with their new teammates, role and the level of competition, but also about the NBA itself, particularly when we compare this new information with what we knew (or thought we knew) going into the season.

Mike Schmitz
@Mike_Schmitz
Emmanuel Mudiay started the season in China and played in nine games before suffering an ankle injury that put him on the shelf. Under immense pressure due to an 8-3 start and the incredibly short and condensed nature of the CBA regular season (which packs 37 games into just 90 days), Guangdong elected to replace Mudiay with NBA veteran Will Bynum.-Emmanuel Mudiay Chinese Regular Season Video Summary and Analysis
-Emmanuel Mudiay High School Video Scouting Report
-Emmanuel Mudiay Interview At the Nike Hoop SummitThe move seemed to pay off, as the team did not lose a single game until the (meaningless) final game of the regular season, finishing 33-4 and with the #1 overall seed heading into the playoffs.

All the while, Mudiay was still working out and practicing with the team, continuing to collect his paycheck and staying ready for the event that he was called upon due to injury or a coach's decision.

That's exactly what ended up happening, as after losing the first two games of the playoff semifinals, Guangdong head coach Du Feng made the controversial decision to deactivate big man import Jeff Adrien in favor of an all-US backcourt of Bynum and Mudiay. The team only had one day off between games to prepare for this unconventional adjustment, with Mudiay and Bynum never having played together in any type of official setting.

Surprisingly, it worked. Mudiay came off the bench and played 34 minutes, scoring 24 points, grabbing eight rebounds, and dishing out four assists to go along with two turnovers. He shot just 6/15 from 2-point range, but made two of his four 3-point attempts and 6-10 free throws. Guangdong beat Beijing 110-99 at home, forcing a Game Four in Beijing two days later.

Things got a little bit stranger even in Game Four, as towards the end of the first quarter, Will Bynum went down with a hamstring injury that would shelve him for the rest of the game. From that point on, Mudiay was the only import at Guangdong's disposal, and he would go on to play a team-high 44 minutes (including an overtime session), looking utterly exhausted at times. Guangdong seemingly had the game won of a few different occasions, but the heroics of 38 year-old former NBA All-Star Stephon Marbury (who scored 38 points, including an incredible 3-pointer to force overtime) would ultimately prevent them from forcing a decisive Game 5 back on their home floor.

Mudiay didn't find the same success this time around, scoring 15 points, with 7 rebounds and 8 assists, but needing 14 shots (3-10 2P, 2-4 3P) to get there, turning the ball over six times, and again struggling from the free throw line, where he hit just 3-6 attempts (bringing him to 57% from the season). Guangdong's season ended on a disappointing note, with Beijing scoring on a miraculous putback at the buzzer to advance to the Finals against Liaoning.

Still, Mudiay's Chinese adventure went about as well as anyone could reasonably expect considering his age, lack of experience, and the incredible pressure of playing for a championship contending team in one of the least patient and rational basketball environments on earth. There are very few 18-year olds on the planet who are equipped to handle a situation like this, and all things considered, he certainly did not disappoint.

Now it's back to the US where Mudiay will likely keep a low profile until NBA Draft season rolls around, where its unlikely teams will get to see a great deal more than they were able to in China. This is what makes these surprising two playoff games he played this week so interesting, prompting us to take a deeper look at the film and see what can be gleaned.

Video Analysis
(Video may not load with Internet Explorer. Use Chrome or Firefox)
Read full article

Mike Schmitz
@Mike_Schmitz
An ankle injury ended Emmanuel Mudiay's season in China after just ten games. With the playoffs around the corner, and Mudiay certain not to be activated, its time for Mike Schmitz to break down the video of the potential top-3 pick's brief stint overseas.

Mike Schmitz
@Mike_Schmitz
A preseason video breaking down the strengths and weaknesses of point guard Emmanuel Mudiay in anticipation of his season in the Chinese Basketball Association.

Matt Williams
@DraftExpress
Emmanuel Mudiay and Nikola Jokic were exceptional during the competitive portion of practice, guiding their team to a 44-41 victory. Mudiay, who had a couple of great moments running the pick and roll yesterday, did most of his damage in transition today, but continued to flash a knack for making plays in the two man game in the half court. Mudiay's decision making and consistency have left something to be desired at times throughout his career, but this was a very steady performance for the SMU commit, as he made sound decisions with the ball for the most part, and flashed the court vision and explosiveness that makes him one of the most intriguing prospects in the incoming freshman class early and often. He is certain to become a lockdown multi-positional defender under Larry Brown, and shows a great attitude in running this World Team unselfishly and playing with a team-first attitude. The next step in his progression will be to improve the consistency of his outside shot, but with the improvements he's showing in his mechanics, it's likely only a matter of time until that happens.
Read full article

Strengths:
-Possesses phenomenal physical tools. Has great size for position to go along with a chiseled frame
-Excellent athlete
-Phenomenal in open court
-Strong ball-handler. Can get to the basket thanks to his powerful first step and excellent strength. Finishes with authority
-Draws tons of fouls. Gets to the free throw line at a great rate
-Can find open man. Likes to get others involved. Shows great flashes of court vision at times
-Has tremendous potential defensively
-Outstanding rebounder for position

Weaknesses
-Lacks polish offensively, as both a facilitator and scorer
-Limited outside shooter. Made just 6/41 3-point attempts in 13 Nike EYBL games this spring
-Needs to work on shooting mechanics. Shoots the ball on the way down. Needs time and space to get shot off
-Much better in open floor than half-court game. Playmaking, decision making still a work in progress. Not consistent with his approach. Plays in spurts at times. Has a tendency to overdribble. Doesn't always read the floor, particularly on the pick and roll. Sometimes forces issue unnecessarily. Relies too much on physical tools
-Extremely turnover prone. Ranked #1 in the EYBL in turnovers. AAU team lost more games than they won when he played

Outlook: Incredibly gifted athlete with terrific upside. Has quite a few holes in his game and needs plenty of work on his skill-level, but looks to be in a good place to improve at SMU under Larry Brown.
Read full article

Strengths:
-Tremendous size for the point
-Huge frame. Long arms
-Excellent athlete
-Very good ball-handler
-Powerful driver and shot-creator. Turns the corner well, gets low to the ground
-Can finish around the rim. Excellent frame helps a lot
-Shooting mechanics aren't bad
-Not a selfish player. Comfortable creating for others. Very good on the drive and dish
-Great defensive potential with size and length

Weaknesses:
-Does not look like a very good shooter at this stage. Shoots ball on way down
-Takes bad shots at times
-Didn't always look very aggressive looking to score

Outlook: Extremely unique combination of size, length, athleticism and instincts at the point guard position. Needs to continue to round out offensive game, but is clearly making strides since the last time we saw him. Upside is significant.
Read full article

One of the youngest players in attendance at this event, Emmanuel Mudiay (#5 Scout, #3 Rivals, #7 ESPN) nevertheless showed off intriguing physical tools and talent and is clearly a prospect to follow over the next few years.

Born in the Congo, Mudiay has excellent size at 6-3 or 6-4, with a long wingspan and a strong, well-developed frame. He's a very good athlete who excels primarily in transition right now thanks to his terrific speed. He has the tools to develop into an outstanding defender down the road, even if he has not yet figured out how to translate his athleticism to that end of the floor.

Despite his size and youth, Mudiay shows good instincts as a playmaker, looking willing to make the extra pass and throwing some very nice drive and dish passes to set up his teammates over the course of the week. He's a little careless with the ball and still needs to learn how to play at different speeds and improve his advanced ball-handling skills, but that's to be expected considering his age. His jumper also looks to be quite streaky at the moment.

Athletic guards in Mudiay's mold (think Iman Shumpert) who have the physical tools to defend both backcourt positions are all the rage these days, so it will be interesting to see how he develops his skill-level over the next few years.
Read full article