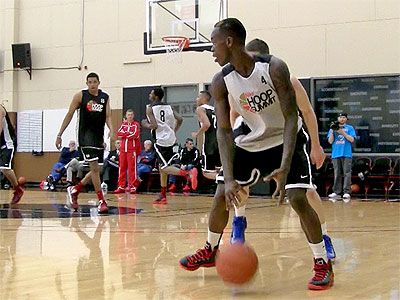 With two more practices in the books, we check in once again on the World Select Team at the Nike Hoop Summit in Portland Oregon.

Practicing in front of a growing number of NBA decision-makers on Tuesday night and Wednesday morning, the World Select Team seemed to settle into a groove over its middle two sessions in Portland.

Head Coach Roy Rana and Assistant Coach Marin Sedlacek have kept the format of their practices fairly consistent, getting their players acclimated with what they want to see from them on both ends of the floor in the game on Sunday, letting them get plenty of shots up to find a rhythm, and ending every session with extensive competitive action, much to the delight of the legion of NBA scouts in attendance.

Playing four 10 minute quarters on Tuesday night in addition to getting up and down for much of the second hour of practice on Wednesday, the quality of play was once again very high relative to previous years. This was especially clear for stretches of today's action when the chemistry and ball movement of the competitive action was astounding for a group that has only been playing together for a few days.

The catalyst for much of that ball movement was German point guard Dennis Schroeder, who took over stretches of the action on Wednesday with his ability to get into the lane and make the right play. Possessing terrific speed and quickness, Schroeder did an excellent job turning the corner on the pick and roll and exploiting mismatches. Consistently able to freeze his defender with a hesitation move before exploding past him to the rim, Schroeder has been a handful for the other guards in attendance. The constant threat of his dribble drive put considerable pressure on the defense, especially in pick and roll settings, and he capitalized in a variety of ways, be it with a scoop or floater when he was given space in the lane, finding a cutter with a drop pass or creating an easy look for one of his big men with a lob when the defense tried to string him out.

Playing pesky, full-court defense, knocking down a number of jump shots, and looking great in the open floor as well, Schroeder is leaving a lasting impression with his play here in Portland. With Marcus Smart returning to school and a notable void after the top tier of point guard prospects in the 2013 draft at the moment, Schroeder could look to fill that gap with a strong performance in the actual game on Saturday. It will be worth watching a potential matchup with Andrew Harrison, who should present a unique challenge for Schroeder with his size.

Karl Towns has also made a very strong first impression on NBA scouts here. Standing nearly 7 feet tall with a 7-3 wingspan, Towns has excellent size for a prospect who stated in an interview with us that he sees himself as a player versatile enough to play some 3, 4, or 5. He is not a freak athlete, but has a very promising frame and good mobility for a player his size. What sets him apart from the average high school junior is his high skill level and feel for the game to go along with his physical tools. Capable of shooting the ball from the perimeter, making plays with his size in the lane, and recently working to develop a back to the basket game, Towns has quickly developed deft touch on his hook shot. An excellent student with a 4.3 grade point average, Towns is a young, charismatic talent worth watching closely in the coming years.Editor's Addition, 2015:

A then-17 year old Karl Towns talks to us about his goals for the Hoop Summit, what it's like playing in front of a horde of NBA scouts, the type of player he was at that point ("a 3/4/5"), his international background, and more.

Livio Jean-Charles has also made a consistent impact in competitive action. A 6'9 tweener small forward/power forward, Jean-Charles doesn't have a polished perimeter skill set, but his athleticism and hustle allows him to make plays in transition and on the offensive glass. He made a couple of very impressive passes today, hit a few midrange shots, and was the target of a number of lobs. He also played solid defense, using his 7'2 wingspan and athleticism to keep his man out of the lane and protect the rim in help defense. Currently a starter for ASVEL in France, he appears to have plenty of role-player potential, even if he remains a bit limited as a shooter and ball-handler. Adding range to his jumper will be key for him as he continues his transition to playing out on the perimeter full time.

Andrew Wiggins had a few highlight plays, but appears to be somewhat fatigued, something he admitted was an issue (more off the court than on it) after traveling extensively the past few weeks between the McDonald's All-American game and the Jordan Brand Classic. It hasn't had a major impact on his play, but it is clear that the travel of All-Star season has him a bit gassed, while the weight of his upcoming decision regarding where to attend school next season surely can't be helping matters much. Nevertheless, Wiggins' talent really shined through in the competitive three on three session in particular, where his athleticism was a major factor with the added spacing he enjoyed. He was able to create his own shot at will with a strong series of jukes and hesitation moves, knock down jumpers with his feet set or off the dribble, and finish plays above the rim with terrific creativity.

Joel Embiid tweaked his back and does not appear be 100%. He flashes potential as a shot blocker and even made a few jump shots. A legit 7-footer with a 7-5 wingspan, he'll be a player to keep an eye on next year given Kansas's reputation for developing big men.

With two more practices on the schedule, it will be interesting to see if this group can maintain the momentum they gained today all the way through game day.
Read Next...