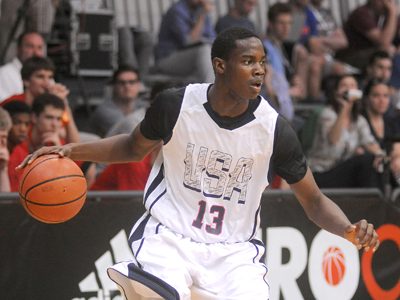 Jonathan Givony
@DraftExpress
All four teams played on the final day of the 2013 EuroCamp, as well as the Team USA Select, U20 France and U19 Serbian national teams.

More players pulled out as injuries have piled up and fatigue has set in, which lowered the level of the camp on day three somewhat, but provided an opportunity for other lesser known prospects to step up and shine.

The game between the Serbian U19 National Team and Team USA followed, but wasn't much of a contest from the opening tip despite being mildly competitive in spurts thanks to the competitive spirit of the underdog US squad.

The size of the Serbians and brilliance of point guard Vasilije Micic was eventually too much for the unheralded and unprepared US Team, as the game eventually became a blowout and an opportunity for Coach Dejan Milojevic to empty his bench.

Top Performer: Vasilije Micic
Having only joined the team on Friday, Micic was well behind his peers on Serbia's U19 squad in terms of knowing the plays and having developed chemistry. For that reason he didn't see much action over the first two games even though he's one of the team's top players. Micic still managed to provide some flashes of brilliance in his limited minutes on the floor before being fully unleashed today. Starting, being handed the keys to the offense, and responding with 15 points, 8 rebounds, and 5 assists in just 21 minutes of action, Micic certainly settled in quickly.

A 6-4 pure point guard with as much creativity and flair as any player you'll find his age on either side of the ocean, Micic took over the game against Team USA. While, not a freakish athlete, he's one of those players who gets anywhere he wants on the floor thanks to a unique combination of terrific ball-handling skills, the ability to play at different speeds and excellent footwork. He utilizes hesitation moves extremely well, playing at his own pace and slicing apart defenses on the pick and roll in particular.

Micic shows excellent court vision, utilizing both sides of the court in the set offense and making pinpoint decisions in transition, passing the ball ahead beautifully, sometimes even going the length of the floor. Having seen considerable playing time in the Serbian League for Mega Vizura for the better part of 3 seasons, one of which he missed a portion of with an injury, Micic's considerable experience for a player his age certainly shows in the way he distributes the ball.

As a scorer, Micic's jumper doesn't look all that pretty--he sports a long, flat-footed release and even tossed up an airball in the game today. Even if it isn't pretty, his shot goes in at a decent rate--he made 38.4% of his 3-point attempts this season and hit three of his four attempts from beyond the arc today.

Defensively, Micic is competitive and shows excellent awareness and anticipation skills, but could very well struggle against higher level players due to his average lateral quickness. He needs to continue to get stronger, which will also help him as a finisher around the basket too, an area he certainly needs to improve in.

Having surprisingly led Mega Vizura to a berth in the Adriatic League next season, Micic will be a prospect to keep an eye on next year as one of the top international prospects in the 1994 class.

-The 29th ranked player in the 2014 high school class according to ESPN, Dwayne Morgan is listed as a small forward, but played mostly the four and five here. A terrific athlete with long arms, the lanky, 6'7 Baltimore native was competitive inside the paint, proving to be a solid rebounder. Not overly skilled at this point, the UNLV commit's intriguing physical tools and motor give him a bright future as he prepares for his senior year.

-Alessandro Gentile did not play today, but his performance is worth noting. An aggressive, crafty perimeter scorer with extensive experience at the highest levels of European basketball, the 1992-born prospect has played well here. Possessing good size and a strong frame for a wing, Gentile is just an average athlete, but the most pertinent concerns about his potential revolve around his questionable body language and attitude. Possessing clear-cut NBA potential thanks to his prolific scoring ability, Gentile surprised many with his decision not to at least enter the 2013 Draft. He'll rank among the top auto-eligible players in the 1992 age group next year and is a strong candidate to get drafted in 2014 if he can find a way to ease concerns about his attitude.

-Serbian junior team player Doko Salic had a solid week all around. At 6'10 with a massive frame, Salic can score in the paint and in the post with his turnaround jump shot. He was also clearly more competitive on the defensive end than he was at the NIJT. A bit of a black hole on the offensive end, Salic flashed a high skill level over the course of the games he played here, tossing in a couple hook shots and finishing well around the basket in addition to his work away from the basket. Rumored to be a candidate to sign with Partizan this summer, the 17 year old will certainly be among the more intriguing international prospects in the 1995 age group that will be eligible to declare for the draft down the road.

-One of the most seasoned players here, Valparaiso wing Ryan Broekhoff has been very consistent this week. As he showed throughout his four year career , he's a smart, versatile player who does the little things on both ends, whether it is being vocal on defense, making the extra pass on offense, or knocking down his open threes. Lacking great athleticism, Broekhoff's NBA future is questionable, but there is little doubt that he could blend at a high level on the European scene in time and potentially earn some looks from NBA teams down the road.

-Janis Timma is among the more impressive physical specimens here. A 6'7 small forward with a strong, 225-pound frame, he certainly looks the part of a NBA prospect relative to many of the players here. An early entry for the 2013 draft, Timma did many of the things he does for Ventspils in Latvia here in Treviso, knocking down a few three-pointers amid bouts of inconsistency and finishing with strength around the rim. An aggressive player with some creativity, Timma is a player some teams like, and he could factor into someone's plans in the second round if he leaves his name in the draft.

-A late addition to this event, Viktor Gaddefors had a nice showing this week. A decent athlete with a good feel for attacking off the catch, the 6'7 small forward looked good when he was aggressive with the ball. He doesn't have great length, and could stand to get stronger and tone his frame, but he helped himself this week and played well on day three, scoring 17 points on 5-9 shooting to go along with 5 steals and 4 assists. Having seen consistent rotation minutes for Virtus Bologna in Serie A this season, the 1992-born Swede will be worth tracking. 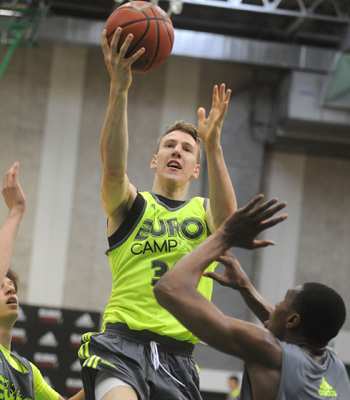 -One of the younger and most intriguing prospects here, Adin Vrabac had a good, but not great camp. Lacking experience in a major way, the 6'8 small forward emerged as a prospect with his performance in the 2012 NIJT for KK Spars Sarajevo and 2013 FIBA U18 European Division B Championship for Bosnia. A smooth, athletic wing who can put the ball on the floor and create off the dribble, Vrabac doesn't have a great feel for the game, lacks great shooting ability, and is still clearly in the early stages of his development, but his size for his position, promising frame, and fluidity make him a very, very intriguing long-term draft and stash option. Having already entered his name in the 2013 draft, it will be worth noting whether or not he keeps his name in consideration at the international withdrawal deadline.

Giannis Adetokunbo
After scoring 17 points on 4/5 from inside the arc and 2/4 from three on top of 5 rebounds, 1 assist, and 4 fouls in 20 minutes against a Turkish team including 2012 Nets second-rounder Ilkan Karaman, Euroleague center Oguz Savas, and former Texas point guard Dogus Balbay, Giannis Adetokunbo was impressive in his third game in as many days.

Starting off the game with a cheap foul and a traveling call, which have plagued the competition on the whole, Adetokunbo finished the first quarter against the Italian Senior National B Team with 0 points. Scoring 10 points in the second quarter, he connected on a couple of nice floaters in the lane to get himself going. Finishing the game with 12 points, Adetokunbo once again showed promising offensive versatility, doing a little bit of everything in the paint, from the perimeter, and as a primary ball handler, but also making it clear that he still has a ways to go on this end of the floor.

Once again, Adetokubo did his best work on the defensive end, where his length and foot speed allowed him to contest perimeter shots, defend multiple positions after switching, rotate from the weakside to challenge shots, and trap ball-handlers in the corners. Though he lacks strength, the 18 year old didn't let himself get pushed around by the more experienced player he was competing against, showing the type of toughness he'll need as he begins to compete more regularly against quality competition.

The NBA scouts in attendance had a hard time hiding how impressed that were with his poise and basketball relative to where he's at in his learning curve. Teams in the 20's believe there's virtually no chance he gets to them. While Adetokunbo was far from dominant here, he helped himself in a major way by showing that he can hold his own against legitimate players over the last two days against a collection of talented pros from Italy and Turkey which will earn him a significant boost in our top-100 rankings and 2013 mock draft when we make our next updates.

Aquille Carr
Aquille Carr struggled mightily this week, ultimately missing day three to return to head to China for a promotional tour. A 5'5.5, 144-pound guard, the 19 year old's lack of experience played against him here, as he didn't look prepared to compete in this setting. With many teams trying to understand the decision-making process that landed him here, Carr didn't help the cause of future Americans who opt to follow his path and attend the EuroCamp in the face of eligibility concerns, as he didn't seem to appreciate the potentially life changing opportunity he was presented with. Appearing out of shape and struggling with his confidence and body language, a normally very positive NBA scout could only muster a, this guy stinks after Carr struggled to score from the inside and outside amid questionable decisions with the ball on day two.

Carr's dreams of securing a massive six-figure offer in Europe came crashing down to earth here, as it was very evident that he's barely prepared to even help a D-League squad at this juncture. Its going to be very interesting to see what the next step is for Carr, as he's in a fairly precarious situation as things stand. He'll have to find a team that is willing to put a lot of work in with him, which is seemingly exactly what the American college basketball system is designed for.
Read Next...