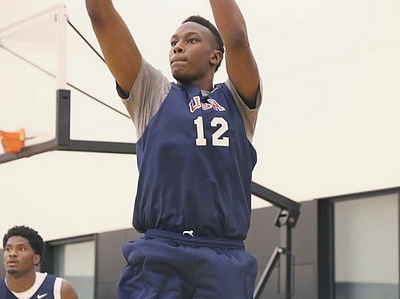 That vigor and offensive potency carried over into Friday night's scrimmage, when they defeated the same team of former college players (plus Oregon sharp-shooter Mike Moser), 89-78, in three 10-minute quarters.

Mike Jones' team certainly wasn't flawless, as they let up defensively and lost the final quarter 38-24. But Team USA undoubtedly took a step in the right direction with Saturday's game against the World Team less than 24 hours away.

They finished with five players in double figures scoring, led by Cliff Alexander and Tyus Jones, who each scored 12 points on 10-of-12 combined shooting. Alexander got them going early, and was perfect from the field on the night on five attempts.

Jones did an excellent job running the show. He got Team USA into its half court sets, made plays for his teammates, pushed the tempo in transition, and provided timely scoring when the team needed a bucket.

While Jones and Alexander were the standouts, it was Team USA's balanced scoring and 3-point shooting that led them to victory. They knocked down 9-of-19 3-pointers (47.4%), spacing the floor for Jones and slasher Theo Pinson (11 points on 4-of-5 shooting) to make plays.

Team USA had five different players knock down at least one 3-pointer, led by James Blackmon, who finished the game with 11 points on 3-of-5 shooting from distance. Myles Turner knocked down a pair of 3-pointers (one in the special situational-based quarter which we did not chart below) to emerge from the semi-slump he's been in this week.

They also played with the sense of togetherness that was expected to personify the team, dishing out 20 assists on 36 made shots.

Offensively, Team USA took a major step in the right direction, shooting 60% from the field and turning the ball over just 14 times.

On the other end of the floor, Team USA showed flashes of the brand of defense it's hoping to impose on the World Team on Saturday.

Playing a small lineup with Stanley Johnson at center and Kelly Oubre at power forward in the third quarter, Team USA forced the scrimmage squad into back-to-back-to-back turnovers. They pressed in stretches, as the scrimmage team struggled mightily to even get the ball in bounds, and Team USA's elite athleticism shined through.

They also did a solid job making it tough on Moser in the half court. He finished with 30 points (4-of-7 from three), but it took him 24 shots to get there, and he went only 6-of-17 from inside the arc. The Portland local certainly had his share of impressive moments, though, hitting some tough contested jumpers, coming up with one extremely impressive dunk, and showing a solid activity level throughout the evening as he was clearly playing with a real sense of urgency.

Beating the scrimmage squad by 11 points certainly doesn't mean Saturday's game against the World Team will be a cakewalk. But there's no doubt that Team USA took a step in the right direction and has momentum that could carry it to victory against Emmanuel Mudiay, Nikola Jokic, Karl Towns and company.

Highlight of the Night
Kelly Oubre posterized Moser with a monster left-handed dunk over the outstretched arm of the 6-foot-8 forward.