A Historical Perspective on Int'l Prospects and the 2015 Draft, Part 1 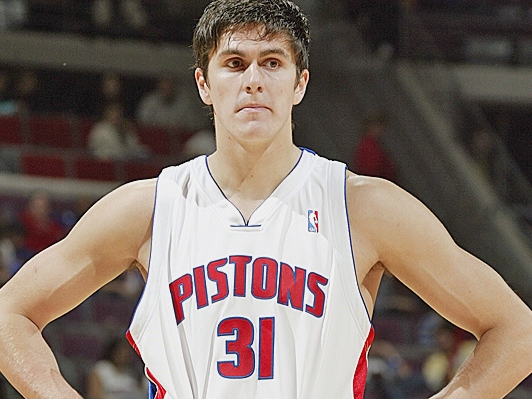 Matt Williams
@DraftExpress
In the weeks leading up to the 2015 NBA Draft, one of the more compelling topics of conversation has centered on the two international players slated to go in the top-10: Latvian power forward Kristaps Porzingis and Croatian wing Mario Hezonja. As is always the case, there's a sense of urgency among the fan bases of the teams at the top of the lottery, as they anticipate what could be a turning point in the fortunes of their teams. With so many historically successful franchises from large markets holding high draft picks this season, the debate on who to take has raged as loudly as any in recent memory. The discourse continued to grow as Porzingis wowed a hoard of General Managers at a solo workout in Las Vegas on June 12th, which led to speculation that he could come off the board even earlier than his already lofty projection, while Hezonja exploded for 18 points in 25 minutes in Game One of the ACB Playoff Finals, setting off further rumination.

We've compiled a considerable amount of data to take a closer look at the history of international draft prospects, paying special attention to those taken in the top-10, to compare and contrast with this year's pair of projected high lottery picks.

The Rise of the International Draft Pick

The history of drafting international prospects in the top-10 is a fairly short one, but the history of drafting international players in general is not. For the purpose of this article, we're defining true international players as those who were born outside of the United States and did not graduate from a North American high school or play for a North American university or professional team prior to their draft eligible year. The first true international prospect was drafted in 1970 by legendary scouting pioneer Marty Blake, who was then the General Manager of the Atlanta Hawks. Blake selected Mexico's Manuel Raga in the 10th round and FIBA Hall of Famer Dino Meneghin in the 11th. Blake, the longtime NBA Director of Scouting Services who passed away at the age of 86 in 2013, was ahead of his time when it came to the NBA Draft. Though the Hawks were unable to pay either player's buyout, their progressive thinking raised eyebrows about the potential of the international game as a source of talent, even if it took two decades before it became commonplace to invest draft picks in it.

Since 1980, 229 true international prospects have been selected in the NBA Draft, accounting for 7.2% of all players drafted. The rise of the game of basketball internationally, thanks to the Dream Team and the success of players drafted in the mid-1980's like Arvydas Sabonis and Drazen Petrovic, is well documented. The improvement in the quality of the NBA Draft eligible international prospects available led to a steady increase in the number of draft picks invested in such players, to the point that 20.1% of draftees since 2000 have been true international players. 2003 is regarded as one of the best in NBA history due to the quality of the top of the draft, but it also marked an unprecedented year for international draftees, who made up one-third of all players selected. Here's a graph depicting the ebb and flow of true international selections over time.

Of those 229 true international players drafted since 1980, 85 were selected in the first round, 130 went in the second, and 14 got picked in the third round and beyond, back when the draft had far more rounds than two. We will be using 1989 as the starting point for the rest of this article to avoid having to find a creative way to account for the additional rounds included before that point.

The Draft and Stash Era

While the NBA's eligibility rules for American players have shifted considerably over time from the preps to pros days to the new one and done generation, the term draft and stash has also found its way into how we talk about the draft and the international prospects eligible for it.

Of the 85 true international players drafted in the first round since 1989, 79 have appeared in a regular season game, with at least three of the six others likely to join that group in the coming years. Despite that success rate, many fans are aware of the two most notable prospects who did not: French 7-footer Frederic Weis, and Spanish power forward Fran Vazquez. Weis who was drafted 15th overall by the Knicks in 1999, and is best known among NBA fans as the player Vince Carter jumped over in the 2000 Olympics.

Vazquez was picked 11th by Orlando in 2005, but much to the chagrin of Magic fans, opted to snub the NBA and play out his career in his native country. The 32-year old averaged 7.2 points and 4.9 rebounds in 20 minutes per game for Unicaja Malaga in the Euroleague this season.

By comparison, only three of the of the 630 players who were drafted in the first round out of the NCAA haven't appeared in a NBA game, including Joel Embiid and Josh Huestis, who figure to make their debuts next season (cross your fingers for Embiid) leaving 1991 Golden State Warriors 25th overall selection Shaun Vandiver as the only player in that group to never appear in a NBA game. Vandiver rejected Golden State's one year contract offer in favor of a two year deal in Italy with Fortitudo Bologna, and never made it back to the NBA after the Warriors relinquished his draft rights.

To this point in history, the stash element of players drafted in the first round has been a temporary condition, frequently resulting from economic and roster spot factors. The large majority of international players selected in the first 30 picks make it to the NBA eventually, even if they don't always offer the instant gratification of their American counterparts. 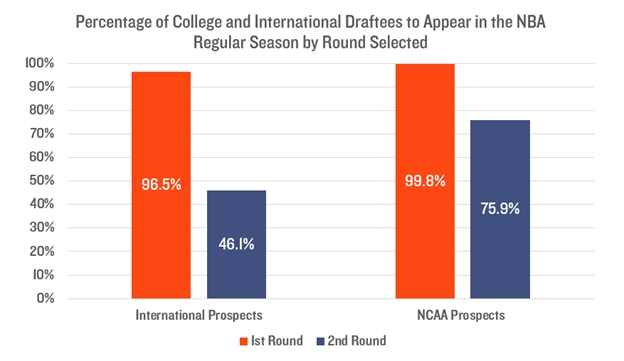 Whether it is because of buyout concerns, roster circumstances, a lack of development, or that their selection was driven by a desire to save money in the short term, most second round picks drafted from outside of the United States ultimately don't wind up in the NBA.

Simple Return on Investment
Trying to compare the return on investing in a college draft pick to an international draft pick who did ultimately play in the NBA can be a fruitless endeavor. Instead of trying to evaluate how well these draft picks have performed on the court, we've instead compiled the minutes per-game of every draft pick since 1989 to look at who earned the most playing time, trusting our sample size to account for special cases and letting the players and the coaches who managed their minutes do the talking. 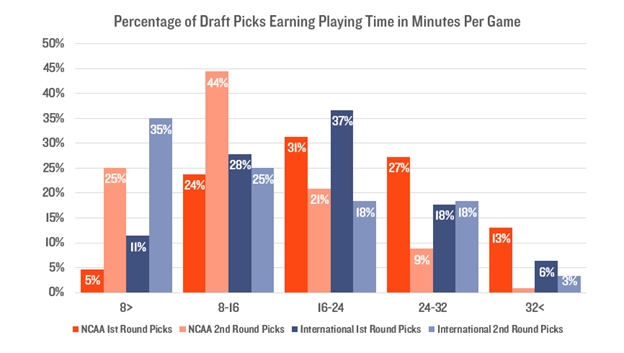 As the above figure shows, first round picks from 4-year college institutions produce a high percentage of players who see significant playing time (24-32 minutes per game) at the NBA level. It is interesting to note, however, that players drafted in the 2nd round from those same programs do not. A high percentage of international 1st round pick ultimately wind up playing solid rotation minutes (16-24 minutes per game).

Perhaps the most telling revelation provided by the graph above is that only 10% of 2nd round picks from the college level play over 24 minutes per game while 21% of all international 2nd round picks earn that distinction. In general, the anomaly reflects the allure of international scouting, as some of the game's very best international players have been picked in the 2nd round. Players like Manu Ginobili, Marc Gasol, Marcin Gortat, and Goran Dragic have been significant contributors at the NBA level despite being drafted with selections in the last half of the draft. While most players in that same range never came to the NBA, those that did ultimately ended up providing better value than their collegiate counterparts. 39% of the second round international picks that came to the NBA eventually became rotation players (16+ minutes), compared to 31% of collegiate second round picks.

Perhaps that helps us understand why so many NBA teams decide to swing for the fences on international players in the second round, as they realize that it's not difficult to find replacement level American talent who can play from 0-16 minutes per game in the NBA via the D-League, or by sifting through undrafted free agents invited to training camp, and thus prefer not to waste a draft choice on them.A Historical Perspective on International Prospects and the 2015 NBA Draft, Part Two: Evaluating the track record, resume and success of those picked in the Top-10, and what that can teach us about Mario Hezonja and Kristaps Porzingis
Read Next...