Finding a Niche For: Terrence Jones 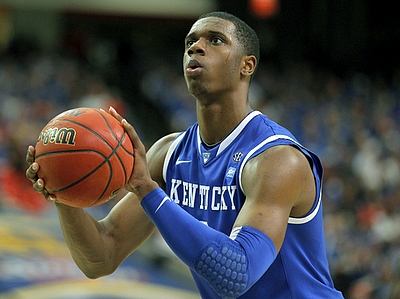 Terrence Jones made a name for himself early in his freshman season at Kentucky with an excellent performance at the Maui Invitational in November, where he averaged 23 points and over 11 rebounds during the three game tournament, while also blocking 10 shots, shooting 4-8 from 3 point range, and getting to the free throw line for an outstanding 32 attempts.

Ranked as the 10th best player in his high school class according to the RSCI, Jones was expected to contribute immediately at Kentucky, but his early season success surpassed the expectations of most. The lefty looked dominant at times playing as a face-up power forward, displaying a lethal combination of skill creating his own shot and making shots from the perimeter, along with aggressiveness and intensity attacking inside the paint and crashing the boards.

His early season success drew plenty of attention from NBA decision-makers, with his name often being mentioned with some of the top prospects in the NCAA. As the season went on, however, Jones lost some momentum, as his shot wasn't falling, his role in Kentucky's offense decreasing, and his confidence appearing to take a hit. After averaging nearly 20 points per contest 16 games into the seasonon 37% shooting from beyond the arc--Jones only hit the 20 point mark again twice over the final 22 games of the season, and saw his perimeter shooting come down to earth in a major way, converting just 27% of his 3-point attempts in that span.

His decline wasn't a detriment to the team though, as Kentucky played its best basketball of the season down the stretch, winning 12 of 13 games before falling to Connecticut in the Final Four. Coach John Calipari may have just figured that his team's best chance of winning was to feature other players more offensively, spreading the wealth and becoming less dependent on Jones on the offensive end. Brandon Knight, Darius Miller, and Josh Harrellson all increased their production offensively in the later part of the season as Calipari made adjustments and Jones played a lesser role.

Some early evidence of this was seen in Calipari's profanity-laced tirade during the Alabama game on January 18th, where he called Jones, amongst other things, selfish. Calipari later explained that Jones sometimes has a tendency to play soft and bail out his defender by settling for 3-pointers as opposed to putting pressure on his man and attacking the basket. To Jones's credit, although he wasn't as productive overall near the end of the season, he was more selective with his perimeter jump shot, knocking down a solid 7 of 15 attempts in his final 10 games.

When projecting Jones to the next level, there are many opinions on how he could best be utilized and what position he should play, as he seems to be stuck between small forward and power forward. He could probably get away with playing either spot depending on the team, style of play, and the personnel around him.


If a team plays a slower pace and uses him as a cutter and posts him up on occasion, where he could take advantage of his strong body and physicality, he could play some three. He would likely be more limited in this type of role offensively though, as it would be more difficult for him to make plays off the dribble from the perimeter against quicker defenders, and he'd likely get less open looks with his feet set as well. He wasn't very effective in the post this season either (scoring only .67 on his post up possession) so he'd have quite a bit of work to do on becoming a more efficient post player to where he could actually punish the smaller threes that would guard him.

On the defensive end, he would need to be on a team with solid help-defenders and a presence at the rim, as his lateral quickness could be questionable when trying to defend NBA small forwards on the perimeter.

The more likely role for him at the NBA level, at least at this stage in his career with his current body and skill set, would be to play as more of a face-up four man, similar to his role at Kentucky. This would suit teams looking to get out and run a bit more, and would help with spacing in the half-court. Jones could continue to exploit his quickness advantage on the offensive end and utilize his ability to make plays of the dribble, attacking the basket, or using a dribble or two and pulling up for jumpers.

He'd also likely get more open looks from the perimeter and help to stretch the floor if he can become a bit more of a consistent threat from the outside. He shot a lackluster 33% from the 3-point line this season, but he showed flashes of being better than that. Although he doesn't have textbook form, like many lefties, he has a decent release, shoots the ball with confidence, and was more proficient when he was selective with what shots he should be taking,

Off the dribble, Jones has a nice first step and very good ball-handling skills for a player his size, but he heavily prefers driving left and needs to really focus on developing his right hand. He's comfortable handling in the open court as well, even showing the ability to grab a defensive rebound and take off with the dribble. His decision-making is still a bit shaky at times, as expected for a player his age, but he does have good passing instincts and has displayed the ability to make plays for others off the bounce on occasion.

On the defensive end, Jones isn't the ideal size for an NBA power forward at 6'8, but there are plenty of guys in the league at his size who manage to get by, and Jones has a long 7'2 wingspan and very strong, solid frame for a 19 year old, so he should be able to hold his own physically in most matchups. He also averaged almost 2 blocks per game this season, further illustrating his presence in the basket area.

He's a solid defensive rebounder as well, as evidenced by the fact that he averaged 8.2 defensive rebounds per forty minutes pace adjusted. He's tough, plays with great intensity, and has solid instincts going after rebounds. Moving him out to the three takes him away from the basket more and limits his effectiveness as a rebounder.

Overall, although Jones's stock probably isn't where it once was earlier in the season, he's still looked at a potential lottery pick, as it's clear that his versatility and physical tools are very unique and desirable traits that NBA teams covet. While his ultimate role and position may still be up in the air, he still shows very good potential down the road as he continues to add polish to his game and shores up some of his weaknesses.
Read Next...