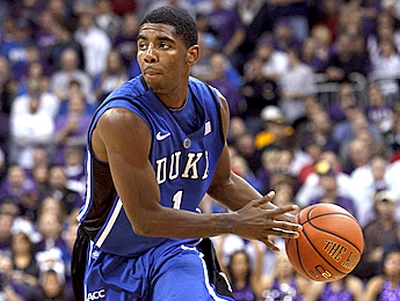 Joseph Treutlein
@DraftExpress
Box-scores don't always tell us everything we need to know about what happened in an actual game, and seasonal stats can be misleading at times in attempting to project what type of NBA player a NCAA or international prospect will become.

That's why it makes sense to branch out and explore other alternatives that are available to us, including those offered to us by Synergy Sports Technology, who've logged virtually every individual possession of every game this year's NBA draft class has taken part of.

These possessions are manually categorized by the type of play they resulted in,and then once again, evaluating what actually occurred in that sequence.

Prospect Breakdowns
-The projected #1 pick in this year's draft, Kyrie Irving's statistical prowess is just as impressive as his scouting report.

Despite playing in just 12 games this season due to injury, Irving leads all guards in the draft in a variety of categories, most notably overall efficiency, where he scored a scorching 1.199 points per possession on a middle-of-the-pack 14.2 possessions per game. Irving is likewise ranked #1 in both overall halfcourt and overall transition efficiency, making excellent use of his possessions from all areas of the court.

Breaking down his prowess in the halfcourt, Irving does himself a ton of favors with his style of play, having a game geared towards free throws and three-pointers. Irving drew a free-throw on 19.7% of his halfcourt possessions this season, well ahead of the second-ranked Ben Hansbrough at 16.2%. His adjusted field-goal percentage of 60.9% also ranked first, helped heavily by his 46.2% three-point shooting on 3.5 three-point attempts per game (of 9.5 field goal attempts overall).

Like many point guards, Irving saw the bulk of his halfcourt possessions in the form of isolations (25.6% of the time) and pick-and-rolls (20.5% of the time). His 0.95 PPP on isolations ranked in the top half of the class, while his obscene 1.438 PPP on pick-and-rolls was so far ahead of everyone else, none of whom posted a PPP higher than 1.0.

Irving didn't see much time playing off the ball (13.5% of possessions spotting up and 1.9% of possessions off screens), but he posted above average efficiency in both areas, and clearly has the spot-up shooting ability and range to be a serious off-ball threat.

Irving's jump shot numbers on the whole are incredibly impressive, as once again he leads all guards with a 1.226 points per shot, with him shooting a near equal amount of pull-up and spot-up jumpers. Continuing with the trend, Irving also lives up to his billing as a phenomenal finisher at the basket, with him once again leading the pack with a 1.5 points per shot around the basket in the halfcourt.

One last interesting note for Irving is that 25% of his possessions came in transition, the highest of any player in the class. He drew a free-throw on a ridiculous 34.6% of those transition possessions, well above the next ranked player, Brad Wanamaker at 25.0%.

All things said, Irving appears to be the cream of the crop in virtually every statistical category, with halfcourt turnover percentage (15.4% of possessions) being the only major category he ranks in the middle, as opposed to the top, of the class. Not only does Irving excel in so many individual categories, but his distribution of possessions is also inclined towards shots that are normally of the highest efficiency (free-throws and three-pointers), giving him the potential to be an extremely dangerous and proficient NBA player.

Irving's small sample size obviously tempers the enthusiasm some for his extremely high numbers, and adjusting to a less ball-dominant role may be necessary in the pros, but it's clear Irving has a highly developed skill set that is already refined to playing winning basketball, and his versatility and comfort in the pick-and-roll could make his style fit even better in the NBA than it did in the NCAA.

-The second ranked point guard in the class, Kemba Walker doesn't light up the charts in every category the way Irving does, but certainly stands out in a few key areas.

Walker immediately stands out due to the number of possessions he uses every game, as his 23.56 possessions per game rank third in the class, trailing only Jimmer Fredette and Andrew Goudelock, both of whom played noticeably inferior competition. Walker's 0.975 overall PPP ranks seventh in the class, something certainly helped by his 9.5% turnover rate, the lowest of all guards by a wide margin.

Walker ranks right in the middle of the pack in efficiency in spot-ups, isolations, and pick-and-rolls, while having a pretty average distribution of possessions between the three.

Walker ranks poorly in jump shot efficiency, with his 0.89 PPS ranked 15th of 20, though having the fifth highest percentage of off-the-dribble jumpers definitely doesn't help him. Walker doesn't stand out with his scoring efficiency on either pull-ups or spot-ups, but adjusting to a more natural distribution in the NBA could help his overall efficiency on jumpers.

-Brandon Knight's .901 points per possession overall ranks 15th, but he's hurt by a low amount of transition possessions and poor efficiency on those possessions. Knight's 0.896 PPP in the halfcourt ranks a slightly better 13th.

Knight hurts himself in the halfcourt by having one of the higher turnover percentages (16.9%) and one of the lower free-throw drawing percentages (10.0%), which negates his above average adjusted field goal percentage of 50.9%.

Knight didn't attack the basket at a high rate, taking shots around the basket on just 20% of his halfcourt possessions, third lowest of the group. His 1.294 PPS on these attempts bodes well for him, though, and he could find more attempts to do this in the more open NBA.

Knight comes out in the middle of the pack in jump shot distribution and efficiency, not standing out in any area, with his lack of efficiency being somewhat surprising given the high number of three-pointers he attempts.

-Jimmer Fredette unsurprisingly stands out in a variety of categories, most notably leading everyone in possessions per game by a wide margin at 26.97. Fredette's 1.03 PPP also ranks fifth overall, with him having the same ranking in the halfcourt.

The most ball-dominant player in the group, Fredette's spot-ups only account for 8% of his total possessions, while isolations and pick-and-rolls amazingly combine for over 50%. Fredette posts an average .889 PPP and .888 PPP on isolations and pick-and-rolls respectively, but the numbers are slightly more impressive given the immense number of possessions he uses and the defensive attention he sees.

Fredette doesn't disappoint with his pull-up jumpers, as his 0.952 PPS ranks fifth of all players, and his 227 attempts easily rank first overall. Jimmer likewise ranks fifth on guarded catch-and-shoots, though his 1.342 PPS aren't far off the first place mark of 1.390 from Charles Jenkins.

-Reggie Jackson ranks fourth with 1.03 PPP overall in the halfcourt, where he shines with his scoring efficiency, having just an average turnover rate and a below average free throw rate.

Jackson sees 24.6% of his possessions on pick-and-rolls, seventh in the class, while his 0.985 PPP on those possessions ranks an impressive third.

Jackson handles himself well as a finisher both around the basket and on jump shots, ranking in the top six in efficiency in both areas. Jackson's 42% three-point shooting definitely helps him here, as does his ability to hit shots off the dribble, as his 0.989 PPS on pull-up jumpers ranks third in the class.

-Nolan Smith's 20.6 possessions per game ranks sixth in the class, which was certainly helped by Kyrie Irving missing over two thirds of the season. Smith held his own well with an average 0.961 overall PPP against very tough competition.

Smith ranks as just an average finisher around the basket and on jump shots overall, but he's fourth best in the class on unguarded catch-and-shoots at 1.443 PPS, and his 101 shots of this variety were easily the most in the class.

-Josh Selby's rocky freshman season looks much worse from a statistical perspective than it did from a scouting perspective, with him ranking dead last in a variety of major categories, namely overall efficiency at 0.802 PPP.

Seeing 39.5% of his possessions as spot-ups (easily the highest in the class), Selby clearly had problems adjusting to his role, a dramatic turnaround from what he did in high school. Selby likewise attempted some of the fewest numbers of isolations and pick-and-rolls in the class, not performing well in either area on his limited possessions.

Selby's finishing numbers on jumpers and shots around the basket actually aren't bad, but he hurts himself severely by having the second highest turnover rate (18.4%) and second lowest free throw rate (6.3%) on halfcourt possessions.

-Darius Morris' 17.6% turnover rate in the halfcourt is fourth highest among guards, while his 0.857 PPS on jumpers is fifth lowest. Morris has the dubious distinction of being a much better pull-up jump shooter (0.937 PPS, sixth best in the class) than catch-and-shoot jump shooter (0.6 PPS, easily worst in the class).

-Charles Jenkins is a statistical beast, trailing only Kyrie Irving in overall efficiency at 1.153 PPP. Jenkins ranks in the top five in adjusted field goal percentage, turnover rate, and free throw rate, being a very well-rounded player from a statistical perspective.

Jenkins scores the ball well inside and out, ranking second overall on finishes around the basket at 1.404 PPS and fourth on jumpers at 1.178 PPS. Jenkins' 1.588 PPS on unguarded catch-and-shoots ranks tops in the entire class, clear evidence of his outstanding pure shooting ability.

Jenkins' ability to create his own shot is also on display in his isolation numbers, where his 1.119 PPP rank second overall on an impressive 135 possessions.

-Shelvin Mack boasts pretty average numbers overall, but stands out noticeably in one area, boasting the highest PPP on isolations at 1.131.

-Norris Cole is the most pick-and-roll dominant player in the class by a massive margin, seeing a ridiculous 34.7% of his overall possessions on pick-and-rolls, where he scores a solid 0.924 PPP. Cole also stands out by having the third lowest overall turnover rate (11.7%) in the class.

Hansbrough sees 22% of his possessions as spot-ups, fifth most in the class, while his 1.393 PPP on these possessions ranks third. Hansbrough does most of his damage on jump shots, where his 1.198 PPS ranks second only to Kyrie Irving.

-Demetri McCamey spends most of his time playing on the ball, but boasts outstanding efficiency off the ball, where his 1.651 PPP on spot-ups easily ranks first in the class. His third-ranked 1.184 PPS on jumpers is a big reason why.

-Andrew Goudelock's 24.04 possessions per game ranks second in the class, and he also sees the largest percentage of his possessions in the halfcourt at 89.9%, while most of the class is in the 75-85% range.

Goudelock's isolations and pick-and-rolls alone account for over 50% of his possessions, and jump shots account for 77.2% of his field goal attempts, unsurprisingly tops in the class. Goudelock also takes the highest percentage of his jump shots as pull-up jumpers (40.7%), and scoring a very impressive 0.995 points per shot on those attempts, second in the class.