Word on the Street, June 16th 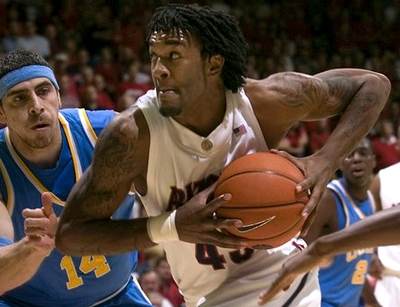 There is plenty of chatter in NBA circles about issues going on in Golden State that could clearly affect the way they approach their draft pick on June 25th.

The talk is that Monta Ellis is unhappy with the direction the organization is heading in, and still holds a bit of grief over the way they held his contract status in limbo for months following his moped injury. For weeks weve heard that Ellis is no longer interested in playing for Golden State, and apparently it had reached a point where it was close to popping off in the words of one NBA executivemeaning going to the media and publicly demanding a trade.

General Manager Larry Riley and head coach Don Nelson reportedly flew to Atlanta to meet with Ellis this week, and basically have made every attempt possible to defuse the situation, at the very least in order to not lose leverage in any trade talk they will inevitably be involved in. One NBA executive we spoke with believes that Ellis was promised that the Warriors will not be picking a point guard with the #7 pick, and that he will be the one running the show for them next year.

A number of agents seem to have heard similar things or just dont want to get anywhere near this situation, and both Jrue Holiday and Stephen Curry are currently refusing to work out for Golden State. The same goes for Ricky Rubio and Tyreke Evans.

Golden State is in a different situation that most teams picking in the top-10, as they are under an unusual amount of pressure to win immediately at all costsor else. Its widely accepted at this point that incoming General Manager Larry Riley has one year at best to work enough magic in his teams front office and roster to convince ownership to keep him around. Head coach Don Nelson needs 24 wins to surpass Lenny Wilkens and become the winningest coach of all time.

The reality of these situations would seemingly rule out point guards Brandon Jennings and Jonny Flynn, both deemed too raw to be of immediate help to the Warriors next season. Stephen Curry could still be in the mix here, despite the fact that he wont work out here. Its not quite clear what that would do for the Monta Ellis situation. The two other players that seem to be the main candidates are Jordan Hill, and surprisingly enough, James Johnson. Golden States front office appears to be leaning towards Hill for now, and may have even told him as much after he worked out for them last week, according to a report by Marcus Thompson II of the Bay Area News Group.

Hill had dinner with Coach Don Nelson on Thursday and said he walked away feeling that No. 7 might be the lowest he would go.

"He said if I'm not picked in the top six," Hill said, "they're probably going to take me."

Regardless, look for the Warriors to heavily pursue bringing back Baron Davis this summer, and dont be surprised to see them do something unexpected on draft night.

-While plenty of media outlets are speculating about a potential deal between Cleveland and Phoenix, weve heard some talk of a possible trade between Cleveland and Washington actually. The deal would essentially be a cost-cutting move for the Wizards, sending Antawn Jamison and filler (Mike James) to the Cavs for Ben Wallace and Sasha Pavlovic. Wallace seems likely to retire, and Pavlovic is on a non-guaranteed contract for next season. Its not clear whether the Wizards would need to surrender the #5 pick. Jamison is attractive to the Cavs since hes exactly the type of combo forward they were missing to match up with Orlandos Rashard Lewis and Hedo Turkoglu.


-No GM in the NBA is apparently more active right now than Minnesotas David Kahn, as hes apparently set on making a big splash in his first draft according to one NBA executive, and is talking to everyone at the moment. One rumor that is making the rounds has Minnesota sending Memphis Kevin Love in exchange for the #2 pick (and filler). Minnesota would then draft Ricky Rubio, which could help them significantly with their ticket sales, and still have the #6 pick at their disposal, which they could use to take someone like Jordan Hill.

-Houston also seems to be very active in trade talk, particularly in trying to move Tracy McGrady were told. McGrady will be out for the first 20-30 games of the regular season, but there is some thought that he might be able to help a playoff team down the stretch, particularly since hes in a contract year. Its tough to see how many teams would be able to absorb the 20+ million dollars hes owed next season. The New York Knicks might be one of them. Houston would be looking for a shooting guard in return.

-Atlanta is reportedly looking to package the #19 pick along with Speedy Claxtons contract, in order to clear additional cap room, likely to resign Mike Bibby. 80% of Claxtons contract (5.2 million) will be picked up by an insurance company, making this a relatively cheap investment for a team with cap room looking to acquire another pick.

-One team that might be interested in moving down in this draft is New Jersey, as they are reportedly very high on Israeli Omri Casspi, but may not want to invest such a high pick on him.

-Following up our blurb from Treviso last week, were told that Jeremy Tyler has officially signed with Maccabi Haifa of the Israeli league. This is a move that is sure to bring owner Jeff Rozen and his team a great deal of attention over the next two years. Tylers camp balked at adding a third year onto the contract, preferring to have the flexibility of no NBA buyout whatsoever when he becomes draft-eligible in 2011. Tyler will reportedly make somewhere in the area of $200,000 next season.

-The Sacramento Kings are doing their best to convince people that they have Tyreke Evans at the top of their board, even going as far as to tell Evans as much in their workout last week. Most NBA people we speak to believe that this is nothing more than them blowing smoke" in order to give themselves a backup plan in case Rubio is gone at #2 or #3, and also to stir the pot amongst Rubios camp. The Kings would very likely want Rubio to work out for them rather than just conduct a meet and greet, but as of right now there are no plans for that.

-In the unlikely case that Rubio slips past Sacramento, it appears that Washington will not hesitate to pick him if they feel like hes indeed the best player on their draft board. The prevailing sentiment at the moment is that Rubio is not in a position to return to Joventut, and that he may have lost some of the leverage he once had by keeping his name in the draft and suing his former team.

Many feel like Rubio would be a good fit in Washington playing alongside Gilbert Arenas, but Rubios camp apparently does not agree with that notion at all.

-Dont be surprised to see players start working out for teams that appear to be slightly outside their draft range on first glance, in hopes of finding the best possible fit. Jrue Holiday for example is working out for the Indiana Pacers at #13, while James Johnson will be in Salt Lake City next week working out for the Jazz, who hold the #20 pick.

-Were hearing that DeJuan Blair is in pretty good shape at the moment, and he continues to have very strong workouts that are easing the concerns teams have about his knee. Blairs draft range looks pretty steady between 12 and 16, although he will work out for teams above and below those picks. Dont be surprised to see a team like Oklahoma City or Portland try to make a move for him on draft night, as both organizations are reportedly very high on him.

-Does B.J. Mullens have a promise from Chicago at 16? That doesnt seem to make a great deal of sense considering that hes working out for Philadelphia at 17 later this weekThe talk of a promise started once Mullens pulled out of the New Jersey Nets group workout, but its possible he just didnt want to deal with the prospect of matching up with Luke Nevill again. Mullens really struggled in the two previous group workouts that they went head to head.

-The Oklahoma City Thunder are reportedly in Los Angeles right now visiting with Hasheem Thabeet and watching him work out.

-Earl Clark is having some very strong workouts as of late, and is rising back up teams draft boards. He was very good in Minnesota apparently, and is strongly in the mix in New Jersey (#11), Charlotte (#12), Phoenix (#14) and Detroit (#15).

Well be in Colorado Springs over the next few days watching the tryouts for the USA Basketball Under-19 and World University Games teams, which are being held simultaneously. The rosters, as youll see below, are tremendous, and will give us a great deal of early insight into the 2010 draft.

For us it will be especially interesting to see these players right after getting such an in-depth look at virtually every prospect in this years draft class over the last few weeks, to see how the two groups compare. It will also be nice to get away from this 2009 draft for a few days