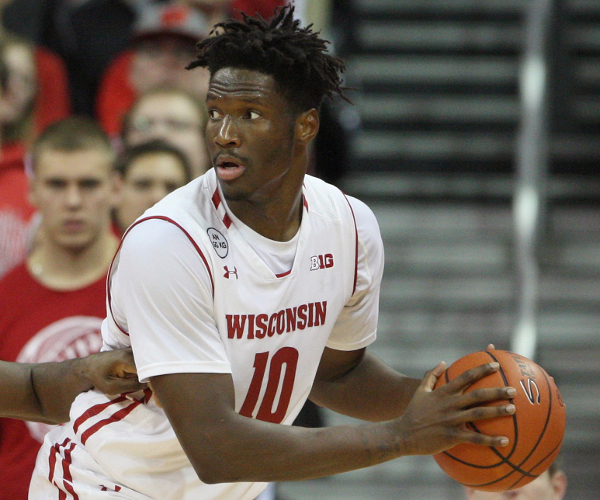 Few players in college basketball saw their circumstances change last season quite as dramatically as Wisconsin forward Nigel Hayes. An effective third-wheel of the senior-laden Wisconsin team headlined by Frank Kaminsky and Sam Dekker that made it all the way to the National Championship in 2015, Hayes returned to Madison as the obvious candidate to inherit the lion-share of the scoring load left behind in the wake of the departure of five of the Badgers' seven leading scorers. Teaming with fellow holdover Bronson Koenig, Hayes seemed like a prime candidate for a breakout year in the Big Ten.

Despite a preseason top-20 ranking, Wisconsin struggled to start the year, suffering early losses to Western Illinois and Milwaukee before Bo Ryan unexpectedly resigned after a December 15th win. With Ryan's chosen successor, Greg Gard, taking the reins and reemphasizing the swing offense, the Badgers had their highs and lows in conference play before an improbable Sweet 16 run. Much like Wisconsin as a whole, Hayes was inconsistent throughout the year, posting poor shooting numbers in his new role as the team's first option after ranking among the most efficient roleplayers in the country as a sophomore. Despite the major adjustment, the 21 year-old forward averaged 15.7 points, 5.9 rebounds, and 3 assists over 36.2 minutes per game garnering All-Conference 1st Team Honors.

Declaring for the 2016 NBA Draft and earning an invitation to the NBA Combine, Hayes took full advantage of the NCAA's new rules for underclassmen exploring their options. After a number of May workouts, the young forward struggled to make an impression in the competitive portion of the Combine, making just one field goal attempt and grabbing only a single rebound in 39 minutes of action in two games. Left with no choice but to withdraw his name from consideration and return to school, the Toledo native will look to bolster his resume for a Wisconsin team that returns every major contributor from last season. 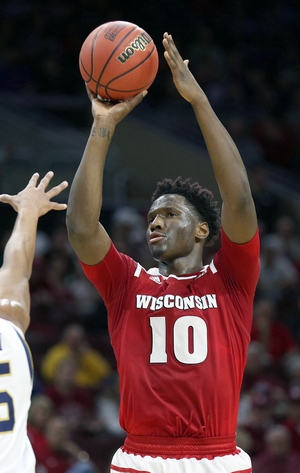 Standing 6'7.25 in shoes with a gigantic 7'3 wingspan and a 245-pound frame, Hayes's intrigue at the NBA level has long started with his length and physical maturity. He possesses decent quickness and average explosiveness, however, looking more like a true power forward than the small forward he seemed to have some potential to become early on, which probably isn't too much of an issue in today's NBA anyway.

A strikingly effective jump shooter as a sophomore, Hayes knocked down just under 40% of his 3-point attempts and 44% of his jumpers overall two years ago. Knocking down 29% of his attempts from deep this year and 31% of his perimeter shots overall, Hayes struggled to make uncontested and contested shots alike as his tendency to lock up his body in the air hurt his results as a junior and led to a lot of ugly misses. The expansion of his role played against him as well as he knocked down just 25% of a greater sample of pull-up jump shots.

Hayes' struggles converting shots in the midrange was a symptom of the difficulties he had creating shots overall. Lacking a degree of shiftiness with the ball in his hands, Hayes excelled at scoring inside two years ago playing off the ball against weaker defenders and in lineups with far superior perimeter shooting, but saw his effectiveness off the bounce plummet against systems centered around slowing him down as a sophomore. Converting 45% of his shots around the rim in the half court according to Synergy Sports Technology, Hayes forced the issue at times as a slasher and his lack of blow-by quickness and great leaping ability led to a lot of difficult shots inside, and a number of near misses as defenders were able to recover after he beat them with his initial move.

If there was one area where Hayes held mostly steady from his sophomore to his junior year, it was as a post option. Doing a nice job using his strength and drawing fouls with his back to the basket, his combination of aggressiveness, footwork, and craftiness helped him score effectively on the block. He doesn't use the most advanced moves, but has variety to his post repertoire using hooks with both hands and mixing in some spins and face up jumpers for good measure. As much as Hayes had a hard time finding an offensive rhythm this season, he often looked most comfortable on the block.

While Hayes struggled last season after being thrust into a role as the Badgers' go-to-guy, it wouldn't be at all shocking to see him bounce back to some extent as a senior. Clearly, he's best suited for a smaller role, and scouts understand that. He'd certainly benefit from a strong year shooting the ball more consistently, which will be a huge key for him at the NBA level.

Defensively, Hayes is a mixed bag. He's solid out on the perimeter for the most part, positioning himself well, but his lack of standout quickness limits him when asked to defend smaller players. His strength and length allow him to hold his own inside, but he doesn't rebound the ball at a particularly high rate as his lack of explosiveness and average toughness and intensity level limits his productivity on the boards.

Despite all he's been through in the last year, Nigel Hayes remains one of the better NBA prospects in the senior class. His sophomore season remains a notable bright spot on his resume, even if his efficiency wasn't even close to sustainable in a bigger role. If he can re-establish himself as a shooter and make better decisions creating with the ball in his hands, he could help rebound his stock headed towards the 2017 NBA Draft.
Read full article 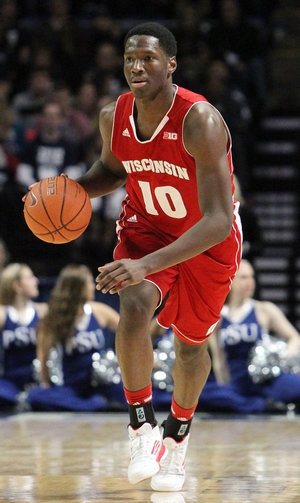 Ranked as the 83rd best prospect in the class of 2013 by ESPN, easily the highest among recruiting services that year, Nigel Hayes put together a terrific freshman season, exceeding even the most optimistic projections for his first year in the NCAA. The Toledo, Ohio native averaged 7.7 points and 2.8 rebounds in just 17.4 minutes per-game, carving out a significant role for a talented Wisconsin team that was an Aaron Harrison three-pointer away from playing for a National Championship last March.

Hayes' success in earning playing time as a freshman was certainly aided by his physical maturity. Recruited as a defensive end like his brother, former Ohio State player Kenny Hayes, before ultimately choosing to pursue basketball at the college level, the Whitmer HS (OH) product combines just-decent size standing 6'7.5 in shoes with a 7'2 wingspan and a powerful 235-pound frame. Possessing good mobility and quickness for his size, Hayes is a physically imposing college power forward, though he lacks size significantly for his position from a NBA perspective.

More-so than almost any player in the country, Hayes did look to impose his will on the game offensively. Using a higher percentage of Wisconsin's possessions when he was on the floor than any player on Bo Ryan's roster, Hayes played a unique role for the Badgers offensively considering he played less than 20 minutes per-game. More than 50% of his possessions came in one-on-one situations in the perimeter or the post, a distinction usually reserved for a prolific post scorer or a dominant inside-outside weapon, not a freshman four-man who lacks 3-point range.

Some of Hayes's massive usage in one-on-one situations is systematic, but it is also rooted in how well his skill level compliments his physical tools. By no means is Hayes a glamorous offensive player, but his ability to put the ball on the floor with both hands, combined with a strong first step, strong lower body, and solid footwork under the rim make him difficult for most collegiate forwards to handle when operating with his back to the basket or facing up in the midrange.

A bit turnover prone due to just how often he looks to bully his way inside, Hayes proves fairly effective finishing around the rim. He doesn't have outstanding touch, but his ability to create angles and absorb contact helped him shoot a solid 55% in post-up and finishing situations, the large majority of which he created on his own. Shooting 67% off cuts according to Synergy Sports Technology, Hayes's finishing numbers bely his actual consistency due to the degree of difficulty of the shots attempts at the rim relative to the average player.

Away from the rim, Hayes is a capable, but inefficient jump shooter. Sinking 24 of his 60 jump shots a year ago, his 40% shooting away from the rim reflects his ability to knock down jump shots when facing up or spotting up in the midrange, but his below average 0.8 points per jump shot shows how his lack of three-point range limits the impact of this part of his game. Shooting just 59% from the free throw line, Hayes has plenty of room to grow as a shooter, but his quick, albeit somewhat rigid, shooting stroke appears to have the potential to be a tool for him long-term.

Aside from his scoring ability, Hayes's rebounding ability doesn't really jump off the page, especially defensively. His 2.2 offensive rebounds per-40 minutes pace-adjusted and his 4.3 defensive rebounds per-40 minutes pace-adjusted would both rank among the lowest marks among power forwards in top-100 if Hayes's name was in that mix. Though some of that is due to the contributions Wisconsin gets from its guards on the glass, scouts will be keeping an eye on Hayes's impact on the glass as he begins to assume a larger role in the coming seasons.

Despite his short comings tracking down rebounds, Hayes was a surprisingly productive defender ranking among the 20 players in the country and one of only two freshmen who averaged over 1.2 blocks and 1.9 steals per-40 minutes pace adjusted last season. His combination of length and lateral quickness are fairly impressive, and although he was prone to some freshman mistakes, his knack for using his hands and being physical inside leave plenty of room for optimism about his future on this end of the floor, even if they did play into the 6 fouls he committed per-40 minutes pace adjusted.

With Sam Dekker and Frank Kaminsky returning to Wisconsin, this season will be an interesting one for Hayes. He isn't likely to see his offensive role grow as much as many of his peers in the sophomore class, but he is likely to once again be a significant factor for one of the nation's elite teams when he's on the floor. Hayes's lack of size and poor rebounding numbers are obvious concerns, but there's no doubt he has some interesting tools to work with and was among the most pleasant surprises in the freshman class a year ago.
Read full article