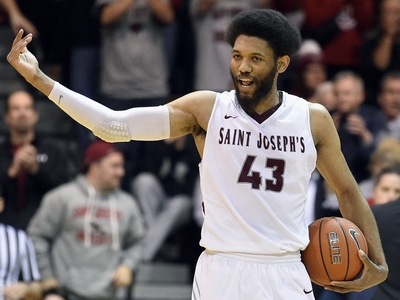 With an afro reminiscent of the era when big hair ruled the basketball world, it's clear DeAndre Bembry has some flare to his character that would make the likes of Artis Gilmore and and Dr. J proud. But when looking beyond the superficial, Bembry also possesses the personality traits comparable to some of the up-and-comers of the modern era, such as Justise Winslow  clearly indicating the hair don't lie.More From Sports Aptitude
-Opportunity Knocks: Personality Factors  Top To Bottom
-NBA Market Watch: Will Barton
-Opportunity Knocks: What's Trending in Development
-Opportunity Knocks: Fitting In vs Fitting Out
-Opportunity Knocks: The Pluses and Minuses of Success
-The DeAndre Jordan Rules
-DeMarre Carroll's Long and Winding Road to Stardom
-The Unbearable Lightness of Patrick Beverley
-Everybody Loves Draymond Green
-Jimmy Butler's Rise to Stardom
-How Situation Impacts Success, Part Two
-How Situation Impacts Success, Part One
-The Thin Line Between Busts and StealsWhat follows is a look at Bembry through the scope of Sports Aptitude's proprietary methodology that utilizes Personality and Situation Factors to help better quantify the probability of success. (For more on Bembry's Personality Group click here.)

Bembry didn't always receive the attention he does today as a fast-rising, first round prospect. He was the 251st ranked high school recruit, and top schools overlooked him. This is somewhat surprising considering he played on the same AAU team that birthed more heralded recruits Karl Town and Wade Baldwin, as well as attending the prestigious Patrick School for his final two high school seasons.

Historically, players with Bembry's personality traits place more value on being in cohesive team environments as opposed to blindly chasing individual status  it's quite possible that Bembry's downstated demeanor and willingness to adjust around others garnered less me first attention despite his team's background history.

Once he settled in at The Patrick School in New Jersey, former home of Michael Kidd-Gilchrist, things started to stabilize and the local Universities began to take notice. Again, this is not an unexpected late bloom for a player who profiles as highly methodical and patient with the process of development.

After deciding between St Joseph's and Temple, Bembry eventually committed to St. Joseph's because, he said, "It just came down to a chance to play. It was a great team that needed a piece. I gave them that piece.

The early opportunity worked for Bembry. He was the Atlantic 10 Rookie of the Year as a freshman, named to the All-Conference first-team as a sophomore, and then as a junior he won A-10 Player of the Year and led the Hawks to the NCAA Tournament.

Bembry was given nothing. Coach Phil Martelli was clear that the opportunity in front of Bembry would have to be earned. This is the ideal blend of opportunity and expectation for players from Bembry's Team Culture oriented personality group.

These are players whose decisions are a strong reflection of their surroundings. They also generally thrive in situations that provide more structure, continuity, and a path to opportunity that is more easily identified. In fact, the largest drop of successful NBA players comes from this group.

Players in this Team Culture group that share Bembry's own traits typically excel on the NBA level in situations that are best described as having a transition plan in place. When things are more stable and there is an obtainable role to pursue, these players are often at their best.

Much like the successful players in his group, Bembry is ideally suited to be challenged by a team that values his current skill-set and provides him with a clear action-item list of tasks leading him on the path to unlocking his potential.

Bembry has shown what he can do when the demands placed on him are high. Yet, he hasn't been asked to carry a light load since very early in his high school career. As is often the case with players like him; the expectations of fulfilling a key role on a cohesive team with superior talent may unlock another level to his game.


Through three years with the Hawks, Bembry experienced a rapid level of improvement, with his hallmark attribute being his versatility. He can defend multiple positions and fill multiple roles on offense as a 6-foot-6 playmaker.


Bembry told Sports Aptitude he's been watching film for the past two or three years, and considers it integral to his progression. As the data above shows, his assist-turnover and pure point rating both took leaps forward each season.

Bembry's jumper is considered a weakness at this stage of his career, but at 35.4 percent on over 270 catch-and-shoot jumpers at St. Joseph's, it's not as if his shot is totally broken. With some adjustments to his mechanics, he may begin to translate his soft touch around the rim into a more perimeter-focused game. With the understanding that it's precisely what NBA teams want to see him improve, Bembry said at the combine he's working to accomplish that.

It's keeping my balance, keeping my elbow straight. It's little things with my jumper, said Bembry. But it's also repetition. I've been working out for about six weeks leading up to the combine and I feel comfortable shooting.

If Bembry becomes an even average spot up shooter early in his career, and many teams already believe he will, it'll make it easier for coaches to integrate him into their rotation as a playmaker who takes advantage of matchups, defends multiple positions, and can stand in the corner to space the floor when asked to.

Players from this Team Culture group frequently see a spike in their efficiency when they are allowed to play off of others instead of forced to be the whole show.

With an afro comparable to Dr. J, fans might assume Bembry has a loud, eccentric personality, but his traits suggest he's better suited to be a calming influence on the court. In the right situation, DeAndre Bembry's ability to give the game what it needs, coupled with his smooth demeanor, will be his most recognizable attribute - and make his opponents fear the fro.
Read Next...