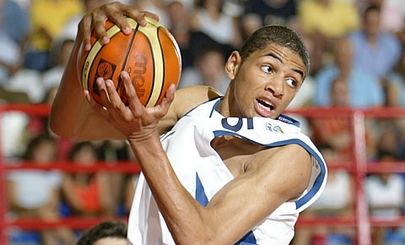 Jonathan Givony
@DraftExpress
The Nike Hoop Summit will feature a couple of very legitimate NBA prospects, not just on the high school side this year, in what might be considered the best roster that has been compiled in a few years now. Nicolas Batum, arguably the top international prospect in the world as far as potential goes, has been selected, something that will surely draw NBA scouts into Memphis in droves, and could potentially hurt the Portsmouth Invitational Tournament, which will be going on at the same time. Batum played inconsistent minutes in the Euroleague this year with Le Mans, but was the MVP of the Under 18 European Championships held this past summer. He is considering entering this years draft according to multiple sources, and will surely attempt to use this game as a platform to elevate himself into the lottery of the 2007 draft, where his potential--although not his production thus far at the senior level-- says he deserves to go.

Batum is represented by French agent Bouna NDiaye, who still has a sweet taste left in his mouth from last years Nike Hoop Summit, where his client, Saer Sene, stole the show and rode that performance all the way into the 2006 NBA Draft, where he was picked 10th overall by the Seattle Supersonics. NDiaye will be sending another one of his prized clients, Alexis Ajinca, a very agile and skinny 7-footer with intriguing skills who some feel might be just as good of a long-term prospect as Batum.

The intrigue doesnt end with the French players, though, as well get a chance to take in a number of highly regarded international prospects who are already contributing excellent minutes to their respective teams. All of these prospects have been discussed at length on DraftExpress, so do check out their profiles.

- Chen Jianghua is widely considered the 2nd best prospect in China after Yi Jianlian, and was praised this summer by LeBron James and Duke head coach Mike Krzyzewski after his matchup with the US National Team.

- Nemanja Aleksandrov is a name that everyone is familiar with, as he was once thought to be the top International prospect in the world after his magnificent performances at the youth stages with the Serbian National team, and a potential candidate for the #1 overall pick in the 2005 draft. His draft stock hit rock bottom after tearing his ACL, and hes struggled to return to form since.

- Omri Casspi has shined in many of the national team events over the past two years playing for Israel, and has been putting together a decent season so far in the Israeli first division playing for Galil Elyon.

- Nihad Djedovic is considered the 2nd best player in the 1990 international class behind only Ricky Rubio, and is in the midst of an extremely intriguing year in the Adriatic League despite being only 16 years old. His rights have already been snatched up by Barcelona.

- Emir Preldzic is an athletic 6-9 small forward with nice defensive skills and intensity who has been playing solid minutes in the Adriatic League.


*Something that needs to be mentioned is that this won't be the first time that the Hoop Summit international team has had big names on its initial roster. The problem in years past has been actually getting the players to make it out, or more specifically, convincing their teams to let them go.

COLORADO SPRINGS, Colo. (March 7, 2007) -- Selecting 11 players from 10 different countries, the 2007 World Select Team that will compete in the 10th annual Nike Hoop Summit on April 7 at the FedExForum in Memphis, Tenn., was announced today.

Tickets are on sale now, with reserved lower bowl seats priced at $10, courtside seats are available at $20, and floor seats (first and second rows) are $40 and $75. Tickets can be purchased at the FedExForum box office, at all Ticketmaster locations, online at www.ticketmaster.com, or by calling Ticketmaster at 901-525-1515.

The Nike Hoop Summit has been staged on nine previous occasions and has given an extraordinary number of talented young players the chance to showcase their abilities.

This year's version promises to be no different, with the World Select Team featuring a roster full of players with a great deal of experience in international basketball and featuring 11 players from 10 countries across four continents.

The roster is rounded off with center Giorgi Shermadini (7'1", Maccabi Tbilisi/Georgia) and forward/center Alexis Ajinca (7'1", Pau-Orthez/France).

Djedovic was the leading scorer at the European Championships for Cadets B Division in both 2005 and 2006. Ugrinoski, a Croatian, plays for Arkadia Traiskirchen Lions in the Austrian Bundesliga, the highest level of professional basketball in that country.

Koponen was named to the All-Star team after starring for Finland in the 2006 under-20s European Championships B Division. Jianghua played for the Chinese national team at last summer's World Championship in Japan and played in four games, averaging 3.5 points, 1.5 rebounds and 1.0 assist per game.

Caspi was selected as one of the best five players at the prestigious Albert Schweitzer Tournament in 2006 and was voted as the Israeli professional Premier League's newcomer of the year in 2005-06.

Mang-Ikri, a Cameroon junior international, has committed to play college ball at the University of Texas. Batum, one of two French players on the squad, was MVP of the under-18 European Championships in Greece last year and is with leading pro team Le Mans.

Preldzic was part of the bronze medal winning Slovenian team at the under-20 European Championships last year and was named one of the tournament's leading five players. Aleksandrov has won European Championships with Serbia at his age group levels in 2001 and 2003 and plays for historic Red Star Belgrade (Crvena Zvedna).

Shermadini plays for Maccabi Tbilisi in the top professional league in Georgia and this month set a league record by scoring 52 points and grabbing 20 rebounds in his team's 111-97 defeat to TSU Tbilisi.

Ajinca, the second Frenchman on the team, plays for Euroleague team Pau-Orthez and has a host of international honors to his name with France. He was a member of the team that won gold at the 2004 European Cadets Championship and gold at the 2006 European Junior Championships.

The World Team at the 2007 Nike Hoop Summit will be directed, for the third consecutive year, by respected Australian national teams coach Rob Beveridge.

The USA claimed a109-91 victory at last years Nike Hoop Summit, giving the USA a 7-2 lead in the series.

The two World Team victories came in 1996 in Charlotte, North Carolina, by a 104-96 margin, and in 1998 in San Antonio, Texas, when now NBA All-Star Dirk Nowitzki compiled a Nike Hoop Summit record 33 points and added 14 rebounds in a 104-99 victory.

The World Select Team has been assembled by Nike's Consultant of Global Basketball Rich Sheubrooks after consulting with general managers, clubs, federations, scouts and coaches from around the world.

"I think the team we have this year is very athletic, from one to eleven, all the players are extremely athletic. That has a lot to do with the fact that basketball, globally, has continued to grow and, with that, we see that growth in the quality of young players from around the world," said Sheubrooks.

"We believe this team compares vary favorably with our teams from previous years and we are very excited about seeing them come together in Memphis."

To date, 66 former USA and World Select players have been drafted by NBA teams and, currently, 33 former USA and nine former World Team members play in the NBA.

USA Basketball on Jan. 15 announced the 10 players and two coaches who had been selected to represent the United States in the Nike Hoop Summit.

Selected head coach of the 2007 USA Team was state of Washingtons renowned prep mentor and Eisenhower High Schools (Yakima, Wash.) successful head coach Pat Fitterer. Fitterer served as the assistant coach for last years victorious USA Hoop Summit Team and was head coach of the USA White Team that captured gold at the 2005 USA Youth Development Festival. Douglas Mitchell (North Central High School, Indianapolis, Ind.), who served as Fitterers assistant coach on the 05 USA White Team, and as an assistant for the USA North Team at the 2003 USA Basketball Youth Development Festival, has been tagged Fitterers assistant coach. The coach and player selections were made by the USA Basketball Mens Junior Development Committee.
Read Next...