Finding a Niche For: Diante Garrett 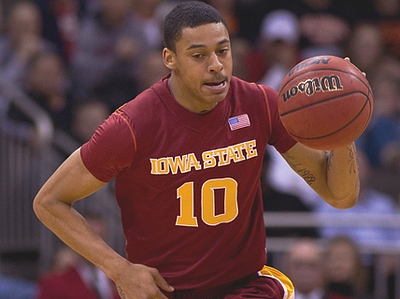 After flying under the radar for the majority of his four year career at Iowa State, Diante Garrett has become a big name in NBA draft circles over the last couple months, and now has a chance to hear his name called in next week's draft.

Garrett put up over 17 points and 6 assists per game this season in one of the toughest leagues in college basketball, but most of the buzz about him didn't start picking up until teams saw more of him at Portsmouth and in workout settings. His stock has elevated to the point that he has a very good chance of being picked in the first half of the second round, which makes him one of the fastest risers in this draft.

The intrigue with Garrett begins with his excellence size and length at the point guard position, as he stands at 6'5 with an almost 6'9 wingspan. He's still very thin and could stand to add quite a bit more strength to his slim 181 pound frame, but that could come in time if he puts the work in.

Garrett also has benefit of his father, Dean Garrett, being a former NBA player, and his coach at Iowa State, Fred Hoiberg, also being a very well respected former NBA player and front office executive. This has likely helped him with how to prepare and handle himself throughout the pre-draft process, and he's done a nice job taking advantage of that and earning some fans amongst NBA decision-makers. His energy, work ethic and overall approach have been mentioned numerous times as major keys to his rapid ascension as of late.

Offensively, Garrett seems to embrace his role as a playmaker and facilitator at the point guard position. He has good speed, rangy strides, and a quick first step that he utilizes along with his shiftiness with the ball in his hands to get into the paint regularly off the bounce. He also shows a nice handle and a strong command and confidence with the ball. His 1.93 Pure Point Rating (PPR) ranked 7th of all players in our top-100 rankings, as he showed the ability to get into the lane off of pick-and-roll or isolation sets and find the open man.

With the losses of Marquis Gilstrap and Craig Brackins after the 2009-2010 season, Garrett's role on offensive end increased for the Cyclones, as he was asked to create and score and at a higher rate as a senior. That came with mixed results as he increased his scoring output from 11.1 to 17.6 points per forty minutes pace adjusted, but he also attempted 3-pointers at nearly triple the rate of his junior season, while connecting on only 32% of his attempts. This hurt his efficiency on the offensive end, as he's clearly not a good enough shooter from the perimeter at this point to be shooting that many 3's.

He has made some strides as a shooter since he started his career at Iowa State, however, as he converted only 39 3-pointers in his first three seasons combined and made 59 as a senior. He also improved his free throw percentage from around 70% for 3 seasons to over 83% in his senior season. He'll need to continue to improve as a shooter to give himself a better chance at sticking in the NBA.

On the plus side, Garrett shoots better and seems more comfortable shooting off the dribble than off the catch and does a nice job creating space to free himself for open looks in the mid-range area. With his speed, shiftiness, and size, this is something he can continue to utilize at the next level off the dribble on isolation and pick-and-roll opportunities, but he'll need to increase his range to make defenders play him more honestly on the perimeter and not make it so easy for them to just go underneath screens. 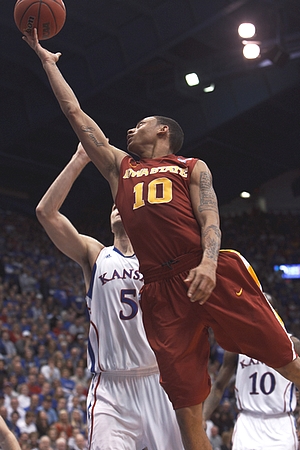 Additionally, Garrett is not an efficient scorer inside the arc at this point, converting just 46% of his 2-point attempts, which ranks him 59th amongst the 72 collegiate prospects in our top-100 rankings. The main reason for that has to do with his issues finishing through contact around the basket in traffic, due to his narrow frame.

Garrett got to the free throw line a paltry 2.5 times per-40 minutes pace-adjusted last season (again one of the worst rates amongst 2011 draft prospects and made under 50% of his attempts around the rim last season according to Synergy Sports Technology, which is unlikely to change in the NBA, where the help-side defense is that much more imposing.

Garrett's increased role in his senior season also highlighted some of the issues with his decision-making. His team depended on him so heavily to create offensively that he often over-dribbled and over-penetrated, leading to some ill-advised shots and turnovers. With that said, he does look to be a guy who likes to pass the ball and facilitate for his teammates, and if he's on the floor with other good players who can take some of the creating responsibilities away from him, he has a chance to develop into a better floor general and decision-maker down the road.

Earlier on in his career, Garrett was incredibly turnover prone, coughing the ball up on 29%, 26% and then 25% of his possessions in his first three years of college basketball. This season that dropped to just 19%, despite his usage rate nearly doubling, which is a very good sign. That's still one of the higher rates of any player projected to get drafted, though, indicating that he still has work to do in this area.

When taking a closer look at where Garrett could fit in at the next level, his role would likely be as a sparkplug at the point off the bench, who can push the tempo and get into the paint off the dribble to setup his teammates. His subpar shooting ability and lack of efficiency as a scorer will limit the amount of teams looking for a player in his mold, however, as he could certainly struggle offensively in the half-court. He has some potential as the handler in pick-and-rolls, but he will have to improve his scoring arsenal if he's to show that he needs to be guarded in these types of sets. Developing a reliable floater and adding strength to help to finish at the rim more consistently would serve him well going forward.

Where he may have a chance to find his niche is on the defensive end. He has the size and length to be a pest on that end, guarding the ball and playing the passing lanes, and even cross-matching on occasion onto some shooting guards, giving some flexibility to lineups. He looks to have solid lateral quickness, quick hands, and shows a good activity level, so if he can continue to add strength to his frame and commit to being a defender, he'll be able to make a positive impact defensively.

Despite the fact that Garrett is a 22 years old, some NBA people believe he still has some upside thanks to his physical tools, energy level, and the improvement he showed late in his college career--ala Garrett Temple.

He did play point guard for the team that finished last place in the Big 12 this past season, and he wasn't overly efficient, so he projects as being far from a lock to stick in the NBA, but there is buzz surrounding him as a strong possibility to land in the second round. Finding the right fit and improving on some of his weaknesses will likely be the difference on whether or not he's able to have an NBA career.
Read Next...