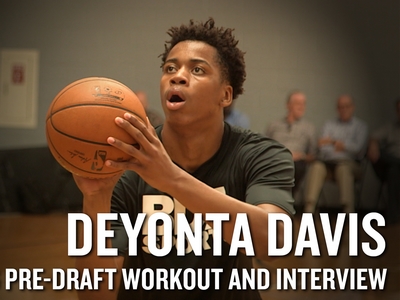 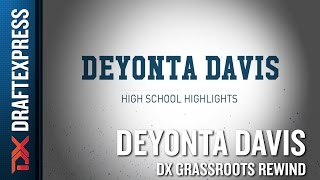 A late bloomer physically, Deyonta Davis worked his way into McDonald's All-American status by the end of his high school career, but was considered far from a one and done type recruit upon arriving in East Lansing.

Playing behind a senior who would go on to win Big Ten All-Conference Third Team honors in Matt Costello, few projected Deyonta Davis breaking out and establishing himself as one of the most interesting young big men prospects in college basketball already as a freshman.

That's exactly what he did, though, putting up stellar per-minute offensive rebounding (4.6 per-40) and shot-blocking (4.1 per-40) numbers, while playing an efficient offensive role (16.5 points per-40, 61% TS%) and demonstrating huge room for growth in a variety of areas.


The intrigue around Davis starts with his tremendous physical profile, which is simply ideal for a modern day NBA big man. He stands 6'10 with a 7'2 wingspan and a big standing reach, to go along with an excellent 240 pound frame that will continue to fill out nicely in time. Davis is also a terrific athlete, smooth, agile and highly fluid, running the floor exceptionally well, with great quickness and the ability to elevate effortlessly around the rim in the blink of an eye.

Offensively, Davis was far from a prolific scorer for Michigan State, lacking the strength to assert himself consistently inside the post, but also an advanced skill-level outside of it. He does not possess a sophisticated post game, as his footwork and countermoves are rudimentary, particularly utilizing his left hand, and he often looks rushed trying to create his own offense.

With that said, Davis found ways to be effective in a very compact role throughout the season, showing just enough glimpses to lead you to believe that he won't be just a non-scoring, defensive oriented, hustle guy down the track. His excellent hands, soft touch and tremendous physical tools make him an extremely reliable finisher. He catches everything thrown his way, and is so quick off his feet that he's very difficult for opposing big men to contest, making him an outstanding target off cuts and pick and rolls, and also a reliable option for lobs. His reach and effortless bounce allows him to finish plays almost without jumping, and he has just enough of a right-handed jump-hook that he can throw the ball in the basket inside the paint from interesting vantage points.

Davis' touch, and solid shooting mechanics, lead you to believe that he may be able to develop the range on his jumper as his career progresses as well. That will be important, as otherwise he may be relegated to a role as strictly an undersized rim-running center in today's NBA.

The best attributes Davis offers at this point likely revolve around his defense. He's quick and agile enough to stay in front of pretty much any power forward, and should be able to add enough bulk to his excellent frame to hold his own as a small-ball center in time. He has great potential as a pick and roll defender, already showing terrific flashes stepping out and switching onto guards and wings, covering ground and moving his feet with excellent lateral quickness, and being difficult to shoot over with the way he contests looks on the perimeter. He blocks an impressive 4.1 shots per-40 minutes this season as well, many on the ball, while showing the ability to develop into an excellent rim-protector in time.

Davis also rebounded very effectively as a freshman, more so offensively than defensively, but nevertheless showed impressive flashes on both ends that could lead to even better results as he continues to add bulk to his excellent frame. He is quick to the ball, and has great hands, often going out of his area and getting off his feet before other big men can react. While his intensity level was inconsistent at times in other areas, he rebounded with great purpose throughout the year, which should give him an immediate role early on in his career when combined with ability to contribute defensively.

Analytics models might not like the fact that he posted just nine steals in 650 minutes of action, but it's important to note that Michigan State forced one of the lowest rates of turnovers of any team in college basketball, something that has been a consistent trend for Tom Izzo teams.


What might be most impressive is Davis was seemingly doing all of this playing almost strictly off his instincts as a freshman. His lack of experience was evident, particularly off the ball, as he does not always show great awareness and looked like he was operating at half speed at times. He's prone to losing his focus, drawing the ire of Coach Izzo and Michigan State's older players, as he can be somewhat naïve in his approach, not always playing with the type of intensity and toughness you might hope, which led to inconsistent results. His lack of strength allowed stronger players to take advantage of him in the post, and he was very foul prone at times (five fouls per-40). Simply put, Davis often looked like a late-blooming teenager with very limited college experience underneath his belt, which is exactly what he is.

Davis fits the mold of the small-ball center that is very popular (and useful) in the NBA these days, even if size-wise he might be more of a natural power forward (the position he mostly played for Michigan State). He has a ready-made role that is easy to project as he continues to get stronger, and even though he might not offer a great deal offensively early on, he shows enough in that area to lead you to believe he can make significant strides with NBA spacing and a strong player development structure.
Read full article

Jonathan Givony
@DraftExpress
The main attraction here for NBA personnel, besides well-scouted Wooden Award candidate Denzel Valentine, is freshman Deyonta Davis, a potential lottery pick. Although he was a McDonald's All-American, Davis was not the most highly regarded player in his class, but has emerged nevertheless thanks to his tremendous physical tools and impressive versatility on defense. Davis has been a very reliable rebounder and rim-protector at the power forward position, helping to compensate for what is otherwise a rather unimposing Michigan State team physically. Although he doesn't produce eye-popping numbers, his ability to switch on screens and stay in front of players big and small has been huge for the Spartans, especially late in games. He came up with back to back defensive plays in the Big Ten Tournament Championship game that essentially sealed the win over Purdue. Casual fans should try and get to know him better as the Tournament moves on, provided Michigan State is able to advance, as there's a pretty good chance the NBA will be calling for him when the season is over.
Read full article

Since Davis is much more of a secondary offensive option than Hayes is for their respective teams, there are far more clips of Davis guarding Hayes than the other way around.