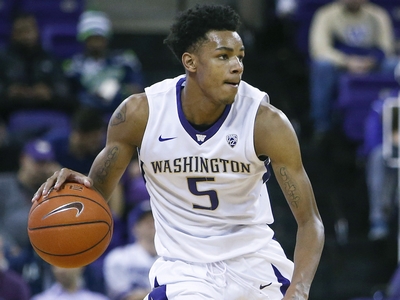 While some NBA teams likely would have preferred to see Murray return to school and gain more experience at the college level in what would have been a very talented Washington team next season, his family situation reportedly played a heavy role in him electing to declare early. Murray's size, length, creativity, scoring instincts, aggressive mentality and youth give him a nice framework to build off as a prospect, even if he's likely years away from helping a NBA team. A team looking to swing for the fences in the 20-40 range could very well elect to pick him and hope they can develop into a better player than you typically expect to find in that part of the draft, thanks to his talent-level. They'll have to be very patient, though.More DX Scouting Reports and Video Breakdowns:
-Baylor's Taurean Prince
-Michigan State's Denzel Valentine
-UNLV's Stephen Zimmerman
-Marquette's Henry Ellenson
-LSU's Ben Simmons
-Michigan's Caris LeVert
-Louisville's Damion Lee
-Florida State's Malik Beasley
-Florida's Dorian Finney-Smith
-Cibona's Ante Zizic
-Estudiantes' Juan Hernangomez
-Oakland's Kay Felder
Read Next...