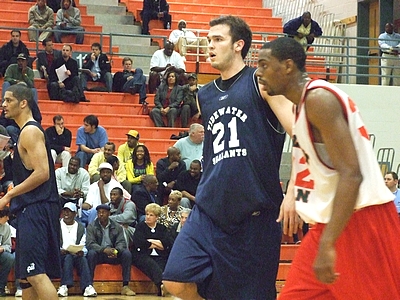 Were back in Portsmouth for the fifth straight year to attend one of our favorite events on the basketball calendar. Many like to complain about those who are or arent here, but we like the atmosphere here and always enjoy uncovering the previously unknown gem (Jose Juan Barea, Dashaun Wood, etc) that inevitably emerges in this setting.

Were looking forward to a nice, relaxing week of basketball here in sleepy Portsmouth, and will surely take advantage of the opportunity to network with as many people (NBA execs, agents, players, European team representatives) as possible. This will be a good opportunity to trade notes on our mock draft and various prospects that we have some question marks about, so if you see some changes in the next few days, youll understand why.

As usual, Portsmouth will be competing with the Nike Hoop Summit (which well also be covering) for the attention of NBA executivesbut unlike previous years (when it was held in Memphis), it will be more difficult for everyone to try and cover bothwhich means that some will have a decision to make. Considering that most of the players here are well known and it would be surprising if any first-round prospects emerged, its understandable why some will decide to go and see the international prospects playing in the Nike Hoop Summit (particularly Serge Ibaka and Alexis Ajinca), as peoples comfort level with them may not be quite as strong.

The bottom line is there is no shortage of high-level decision makers here for players to impress.

The initial roster that comes out about five days before the start of the tournament always seems to be a somewhat tentative list, as players accept invitations before hiring agents, and once new influences start getting involved, many get cold feet about coming out to compete and be evaluated by NBA teams. This year, 17 players who had committed to the tournament ended up pulling out, which gives a chance to some more unheralded players to stand out, but also left some complaining about the lack of big names.

The top prospects in our opinion in this years tournament include: Pat Calathes, Josh Duncan, Charles Rhodes, Gary Forbes, Kentrell Gransberry, Chris Lofton and others. But well surely be keeping an open mind over the next four days, since someone (Jason Maxiell, Carl Landry in past years) always emerges as being a much better prospect than we initially gave them credit for.

We wont know for sure until the entire draft process plays out, but there are a few players not in attendance that in our opinion may have made overplayed their hand and made questionable decisions about where they stand in the pecking order of the NBA draft world by passing up their invite. They include:

Drew Neitzel, Will Daniels, Marcus Dove (injured?), Richard Roby, Sean Singletary, Malik Hairston, Bryce Taylor, James Mays (injured?), Aleks Maric (not in shape), Darian Townes, Marcelus Kemp and Russell Robinson (won championship). Some of the players here may or may not end up getting an invite to Orlando, and all of them surely could have used the exposure of being evaluated in front of at least 8 NBA General Managers and countless other executives.

Only two games were played tonight in the 7-9 PM slots, as the committee is allowing for everyone to arrive safely from around the country before we get a full slate of four games tomorrow.

The most impressive player on the floor in both games, and really by a huge margin, was St. Joes forward Pat Calathes. He came off the bench like a hurricane scoring 8 points and grabbing 6 rebounds in his first 8 minutes on the court, knocking down shots, showing a nice first step taking his man off the dribble, running the floor in transition, and looking extremely active crashing the glass.

His incredible feel for the game was evident from the moment he stepped out on the floor, particularly with the terrific court vision he showed on a number of drive and dish plays or post-entry passesoften times bringing the ball up the floor and starting up his teams offense as their defacto point guard. He finished repeatedly around the hoop with his left hand, scored on catch and shoot 3-pointers or pull-up jumpers from mid-range, and generally did everything humanly possible to show just how versatile and skilled a player he is in this setting.

Defensively, the biggest question mark most people have about him, Calathes did a solid job staying in front of his man, and even when he got beat at one point, still managed to recover nicely and block the players shot at the rim. He did have some problems getting backed down around the basket by stronger players than him (he only weighed out at 206 pounds reportedly)he will clearly have to work on his technique here and find a way to add some bulk to his lanky frame. It was nice to see how active he was trying to contest shots, using his length and timing intelligently in transition to bother playersbut it wont be quite the same against NBA caliber players most likely.

Speaking to NBA people here about Calathes, it seems this was the first time that many here had seen himwhich probably ends up working in his favor considering how impressive he looked. We heard comparisons to Mike Dunleavy being made here on more than one occasion, and one NBA scout we spoke to who is extremely familiar with his game even went as far as to say that in his mind, Calathes is just as gifted athletically as Dunleavy is.

There just arent many players who are 6-10 ¼ (his measurements today) that can beat players off the dribble from the perimeter and handle full-court pressure the way he did today, and the fact that hes as versatile as he is and clearly nowhere near a finished product at this point makes him all the more unique. Were looking forward to seeing how he can follow up his performance today in the next gamehes been ranked all season on our board, so we obviously werent caught off-guard by the way he playedbut he really exceeded all expectations.

Beyond Calathes, there were a few other guys that stood out as well in day one.

Gary Forbes had a very nice showingscoring 26 points to go along with 7 rebounds and 6 assists on 10-18 shooting in 35 minutes. Forbes showed his credentials as a scorer through and through, putting the ball in the basket in a variety of ways, be it with his mid-range jumper, his shifty first step and body control taking the ball to the rim and finishing with either hand, stroking 3-pointers coming off screens or pulling up on the move, or otherwise. He looked a bit more athletic than we initially thought he was, and also more unselfish than we had seen at UMassand seems to be helping himself quite a bit with the way hes played so far. Well keep watching and follow up with a more in-depth report.

Jiri Hubalek might have had the best game of his entire careerscoring 27 points to go along with 10 rebounds, and 3 assists on 10-19 shooting. Everything was dropping for him, be it spot-up 3-pointers, mid-range jumpers, crafty layups off the glass after sharp cuts to the hoop, put-backs after offensive rebounds (some his own), or basic back to the basket moves around the paint. He had 18 points in the first half alone, on 7-9 shooting, but cooled off a bit after that. As impressive as he was with his extremely confident display and undoubtedly high skill level, youll have to excuse us for being a bit skeptical considering that he only averaged 12 points per game playing for an awful team in the Big 12 this year. Maybe he can keep this up, thoughyou never know.

Other Storylines from Day One

There are definitely some interesting storylines of note already this year in regards to the play on the floor, and its mostly recurring themes that we see year in and year out. First is how teams with distributing points guards always seem to fair well here, most notably with the way C.J. Watson, Jose Juan Barea and Dashaun Woods teams excelled in the past two years respectively, with Wood being his tournaments MVP and C.J. Watson and Barea being awarded all-tournament honors.

This year doesnt appear to be any different thus far, as of the two teams who won on day one, one was led by Jamar Butler and Aaron Bruce, and the other by Jason Richards. The three of these players did a very good job running their teams offense and keeping everyone involved by maintaining good ball movement, something that isnt seen on every team at these pre-draft camps. Butler and Richards have been known for this in college, especially this year, where they were among the league leaders in A:T ratio, though Bruce hasnt ever really been a pure point guard, but he did a nice job running the show with Butler here. On that note, its also worth noting how the unselfish play of these point guards rubs off on their teammates. Butler and Bruces team had 29 total assists on 40 field goals. On both of these teams, the good passing of players like Mark Tyndale, Pat Calathes, and Gary Forbes has definitely come out, and its something we expect to see more of in the rest of this tournament.

Another recurring theme is the excellent play of the go-getters, as wed call them. These are players that really get after it on every possession, getting out in transition, playing tough defense, crashing the boards, crashing the passing lanes, contesting shots, and going after loose balls. Players who come here with great athletic tools and a good motor very rarely hurt themselves, and usually can open a few eyes with their impact plays, be it with NBA or European scouts. And the players who come here with the athleticism and motor in addition to a solid foundation of skill can do more than open a few eyes, actually making notable strides with their draft stock, as weve seen with the likes of Carl Landry and Jason Maxiell in recent years.

This year, were seeing the go-getters really excel in the early going, most notably so far with Charles Rhodes, Mark Tyndale, and Bo McCalebb to name a few. All of these players came out here with great intensity and a tendency to consistently do all the little things, and its really helping their teams. Rhodes is someone we saw really explode in the postseason, showing off his skills and intensity, and hes followed that up here, crashing the boards, playing tough defense, and also showing a nice mid-range game with face-up, one-dribble jumpers. McCalebb is someone who also played very aggressive defense, showing great effort in transition and the passing lanes, but also playing excellent man defense, while making some outstanding plays on offense as well. He showed craftiness and explosiveness here, making some very impressive drives to the basket.

The go-getter of the evening, though, would have to be Mark Tyndale, who was literally all over the court, and off the court, too. Finishing with 11 points, 8 rebounds, 8 assists, and 4 blocks, Tyndale clearly was working his butt off on the court, and his intensity is definitely causing some people to look at him a bit closer. That intensity was most evident on a play where he hustled for a ball that was going out of bounds on the sideline, and tossed it back in to a teammate, leading to a fast-break lay-up. On his save, though, Tyndale jumped up with one foot on to the press table, flew right by yours truly at DraftExpress, split the defense of two conversing fans in the aisle behind us, then ran up a few rows of stairs. Most amazing, though, was how he injured no one and managed not to crush our laptops in the process.
Read Next...