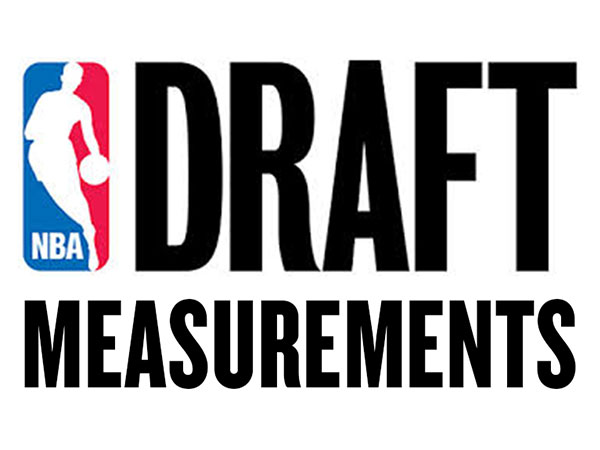 Briscoe's measurements are consistent with those taken at multiple venues over the last 3 years, although he may have grown half an inch to an inch and could easily be listed at 6-4 next year by Kentucky. Though he isn't the same caliber of athlete as Marcus Smart, he stacks up fairly well with the rookie in terms of sheer size. Smart measured 6-2 without shoes with a 6-9.25 wingspan and a 227-pound frame last spring during the draft process. Briscoe ranks among the heavier lead guards in our database, even among college players, but he's done a good job as of late shedding baby fat and adding muscle.

Listed as tall as 6-8 by some sources, Jaylen Brown measured in a shade smaller at 6-6.5 in shoes, but on the whole, his numbers match the official numbers he's posted at various events over the years. His closest physical comparison may be Andre Iguodala who measured 6-6.75 in shoes with a 6-11 wingspan and a 217-pound frame in 2004 at the NBA Pre-Draft Camp. Brown's frame is impressive for an incoming freshman. He may not be quite as powerfully built as a Ron Artest or Stanley Johnson, but stacks up favorably with players like Caron Butler and Shabazz Muhammad. The first measurement we had on Brown put him at 194 pounds three years ago, and since then he's added nearly 30 pounds to his frame.

The smallest player on the USA Junior National Select Team roster, Jalen Brunson nonetheless has a fairly unique frame for a young guard. Even if his size is just average, few lead guards his age have comparable strength. Brunson is physically similar to Deron Williams, who measured in at 6-2.75 in shoes with a 6-6.25 wingspan and a 202-pound frame in 2005.

Small forward Brandon Ingram certainly looks the part of a high upside small forward prospect registering the 2nd longest wingspan on this roster with a frame that has a lot of potential for growth. His wingspan ranks among the most impressive wingspans for a small forward in our extensive database. His standing reach is equally impressive, ranking just a half an inch below that of Kevin Durant who measured 6-10.25 in shoes with a 7-4.75 wingspan and a 215-pound frame in 2007. Ingram's frame will need a lot of work at 196 pounds, but his height, wingspan and standing reach are phenomenal for a wing player.

Chase Jeter, as has been the case throughout his career at the youth level, measured out well for a big man. Perhaps the most impressive element of his physical profile is his nearly 240-pound frame, which he's added some 10 pounds to since he was measured by USA Basketball last summer. Jeter, as it stands, is only slightly smaller than Greg Monroe, who measured 6-11 with a 7-2.25 wingspan and a 247-pound frame in 2010. His body, like so many other players on this US team, appears college ready. His standing reach appears to be long enough to see plenty of minutes at the center position certainly at the college level, and even in the NBA.

One of the most skilled players in this group, Kennard's size is not what's made him such a highly sought after recruit. The future Duke guard compares favorably to his predecessor J.J. Redick who measured 6'4.75 in shoes with a 6'3.25 wingspan and a 190-pound frame coming out of college in 2006. Like Redick, Kennard will have to work extra hard defensively to prove that his lack of length and reach won't be a hindrance at the NBA level.

Malik Newman doesn't have great size for a scoring guard and hasn't improved much on his 180-pound frame over the last few years (he was 170 three years ago), but he measures up favorably to another extremely prolific scoring guard from Mississippi in Monta Ellis. Considering Ellis went to the NBA straight out of high school, we can compare their measurements on even footing. Newman has a size and length advantage on Ellis who stood 6'3.25 in shoes with a 6'2.75 wingspan and 177-pound frame at the 2005 NBA Pre-Draft Camp. Newman's lack of length is something teams will scrutinize when evaluating his defensive potential, and it will be interesting to see if he can continue to add more strength to his frame once he reaches a college weight room.

Ivan Rabb has gotten stronger in the past few years, adding over 20 pounds to his frame. At the moment, he measures similarly to Perry Jones who stood 6'10.5 in shoes with a 7'2.5 wingspan and a 220-pound frame, but it seems that Rabb could conceivably still be getting bigger. Rabb has just average measurements for a NBA center, and will likely need to see some time at the power forward considering his body type, which means continuing to improve his skill-level and trying to maximize his athleticism.

One of the heaviest high school players in our database all-time, Caleb Swanigan has hung steady around 270-pounds since last year. His 7'3.5 wingspan is terrific and is one of the reasons he's been such a prolific rebounder at the AAU level. He measures favorably compared to DeJuan Blair who stood 6-6.5 in shoes with a 7-2 wingspan and a 277-pound frame in 2009.

Allonzo Trier's 6'6 wingspan is below average for a wing at the NBA level, but he is almost exactly the same size that O.J. Mayo was coming out of USC already. Mayo stood 6'4.25 in shoes with a 6-6 wingspan and a 200-pound frame in 2008. Trier also stacks up favorably with Dion Waiters, as his physical profile matches that of a number of other prolific scoring two-guards. He'll have to answer the same questions his predecessors did about their length on the defensive end as his career progresses.

A legitimate 7-footer in shoes, Zimmerman's closest comparison physically appears to be Chris Bosh who measured 6'11.5 in shoes with a 7'3.5 wingspan and a 225-pound frame. Zimmerman has a rather slight frame even though his weight doesn't rank particularly poor among big men selected in the lottery over the last decade. Among the players assembled here, Zimmerman is the player whose physical development is worth monitoring as his combination of size and length is already plenty intriguing.
Read Next...