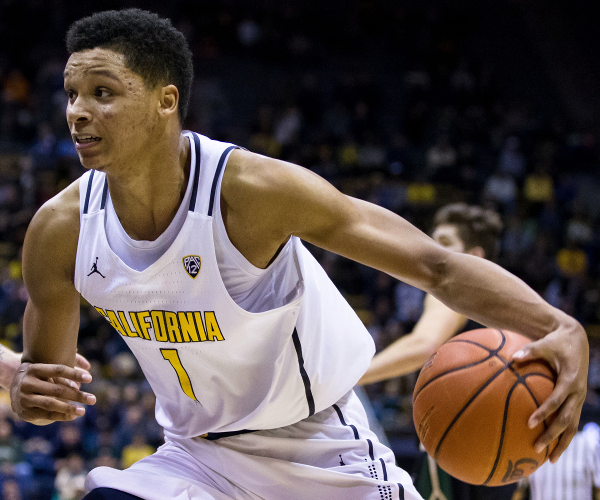 The 2015 #8 RSCI ranked recruit, Ivan Rabb chose to return to Cal for his sophomore season without even testing the NBA Draft waters after an up and down freshman season. Rabb was a likely lottery pick, possibly top ten, but chose to return to school in order to expand his game with the hopes of being more NBA ready with another year of seasoning.

Rabb hasn't made the type of strides in his game scouts were hoping for, and finished the year on a disappointing note, with Cal losing in the first round of the NIT (a game he sat out with a foot injury). His sophomore season averages were similar to his freshman season as he averaged 17.1 points and 12.8 rebounds per 40 minutes. His efficiency decreased with an increase in his usage rate from a 65% true shooting percentage on a 20% usage rate as a freshman to a very poor 55% true shooting percentage on a 24% usage rate this season.

Here's a closer look at the strengths Rabb displayed throughout his time at Cal:

Although Rabb didn't dominate in college by any means, there is still plenty to like about him as a NBA prospect. His potential starts with his physical profile as he is a mobile big man measured at 6'10 with a 7'2 wingspan who moves around the offensive side of the floor easily. He will need to add some strength to his 220 pound frame to be able to compete on the interior, as he has struggled to hold his own inside the paint against other NBA caliber big men from time to time.

Rabb's offensive profile stayed relatively constant from his freshman to sophomore season, with post-ups being his most used possession type, accounting for 38.4% of his total possessions logged by Synergy Sports Technology. Rabb wasn't a very effective post scorer against collegiate defenders, posting a mediocre mark of 0.75 points per possession per Synergy Sports Technology. While he has displayed some skill with his footwork to beat his defender, he has struggled when he has needed to use strength to back his man down or explosiveness to rise above his defender. He has shown that he can be someone who can score from time to time with his back to the basket and he passes well enough (1.9 assists per 40 minutes) to not be a black hole when he gets the ball, but he will need to get stronger, tougher and more assertive finishing through contact to be a reliable scorer inside the paint in the NBA.

Cal's offense was hardly a thing of beauty, lacking any type of spacing, perimeter shooting, or flow, leading to plenty of criticism of head coach Cuonzo Martin for refusal to adapt to the modern styles of basketball we're seeing all over the NBA and NCAA. Rabb's role and allocation of offensive possessions will likely look completely different in a NBA offense, leading many to wonder how much his stagnation as a sophomore was due to his poor situation. Cal played at the second slowest tempo in the Pac-12 last season, which limited Rabb's ability to finish in transition with his open court speed, as Synergy Sports Technology logged only 14 transition possessions for him this season. Also, the Bears didn't run a pick and roll heavy offense with only 8.7% of Rabb's possessions used as the roll man according to Synergy Sports Technology. With more space in the paint in NBA offenses, not being forced to play alongside plodding 7-footers with limited skill or feel, Rabb should be able to use his agility to dive to the rim out of ball screens and use his tremendous hands and soft touch to finish at the basket more frequently than what we saw in college.

Rabb's perimeter skill-set is still evolving, and will need to be refined significantly to operate at the power forward position full time. He converted only 38% of his 58 jump shots logged by Synergy Sports Technology, which includes 8-20 on three point attempts. His struggles continued from the free throw line, where he made only 66% of his 7.4 free throw attempts per 40 minutes. His release isn't always fluid as he often has a hitch at the top of his shot which prevents the ball from coming smoothly out of his hands. His jump shots also have a tendency to be line drives which limits his range and efficiency and he will need an overhaul to his form to be respected away from the basket.

Here's a closer look at the strengths Rabb displayed throughout his time at Cal:

Defensively, Rabb faces similar issues with his size as he does offensively as he is somewhat of a tweener between the power forward and center position. His frame isn't strong enough to body up NBA centers and he doesn't have the explosiveness or length to be a dominant rim protector (averaging only 1.2 blocks per 40 minutes), leaving questions about his ability to defend the paint. On the perimeter, he's often caught flat-footed and struggles to stay in front of dribble penetration, as he doesn't have elite-level mobility that would allow him to cover ground more seamlessly.

To Rabb's credit, he has very good instincts and timing, and can be very effective when he's fully dialed in (which hasn't always been the case throughout his career), giving him a chance to improve in this area down the road. Still, he will need to improve his lateral quickness to defend penetration, both from perimeter big men and guards when he switches onto pick and rolls.

One area where Rabb contributes defensively is on the glass by pulling down 9.1 defensive rebounds per 40 minutes. He has good fundamentals on the glass by always finding a body to box out before going up and getting the ball with his strong hands to rebound in traffic. This is one part of his game he should be able to hang his hat on in the NBA.

After playing two years for a Cal team that didn't always showcase his strengths, there could be some untapped potential in the right NBA situation. However, after a very underwhelming season showing marginal improvement, scouts have plenty of questions about his role at the next level. Rabb can strengthen his draft position with strong showings in the pre-draft process against other big men, but he will need to make some substantial improvement on both sides of the ball to carve out a significant role at the next level.

Mike Schmitz
@Mike_Schmitz
Analyzing how Cal's Ivan Rabb and Washington's Marquese Chriss fared in their head to head matchup in Seattle this past week.

While both Rabb and Chriss are secondary offensive options for their teams, who spend most of their time at the power forward position, they are completely different players. Their coaches used very different strategies throughout the night to counter their strengths and weaknesses, and they weren't always guarding each other or involved in plays their counterpart made.

Ivan Rabb has gotten stronger in the past few years, adding over 20 pounds to his frame. At the moment, he measures similarly to Perry Jones who stood 6'10.5 in shoes with a 7'2.5 wingspan and a 220-pound frame, but it seems that Rabb could conceivably still be getting bigger. Rabb has just average measurements for a NBA center, and will likely need to see some time at the power forward considering his body type, which means continuing to improve his skill-level and trying to maximize his athleticism.
Read full article

Jim Hlavac
@DraftExpress
A very candid interview with committed Ivan Rabb of Team USA at the 2015 Nike Hoop Summit, with a particular focus on his recruiting situation.

Strengths:
-Terrific frame for a 16 year old
-6-9 in shoes with a 7-1 wingspan
-Very good athlete
-Fantastic rebounder on both ends of the floor. Averaged 16.3 rebounds per-40 in 18 Nike EYBL games this season
-Very good finisher around the basket. Quick off his feet. Good second bounce. Dunks everything
-Gets to the line at a very good rate
-Soft touch around the basket
-Some budding post moves and ball-handling ability
-Good timing as a shot-blocker. 4.3 blocks per-40 at the EYBL

Weaknesses
-Still raw offensively
-Has a great frame but still a long ways away from filling out (expected considering his age)
-Doesn't have the strength to establish himself with his back to the basket
-Very left hand dominant with his finishes. Must continue to work on off-hand
-Very poor free throw shooter. 53% from free throw line at EYBL

Outlook: Young, developing big man with significant upside. Still in a very early stage but shows a lot of intriguing attributes to go along with a terrific physical profile.
Read full article