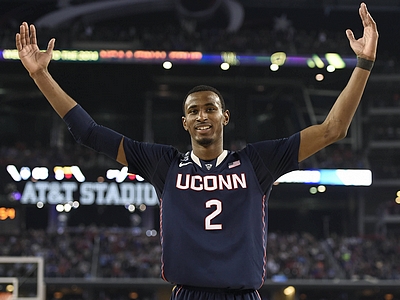 DeAndre Daniels saved the best basketball of his career for the NCAA Tournament, stringing together an impressive six game run to help his UConn team win a National Championship. Daniels elected to strike while the iron was hot and declared for the NBA Draft a few weeks later. Now that his college career is over, we'll take an inventory of everything he displayed this season as an NBA prospect, as well as the things he still has to improve on.

Daniels' biggest strength as a NBA prospect, besides his excellent size and length, likely revolves around his perimeter shooting ability. He improved greatly in this area from his first two years in college, where he made just 33 of 128 attempts (28%) from beyond the arc to start off his career, knocking down an outstanding 42% of his 3-pointers (50/120) as a junior. 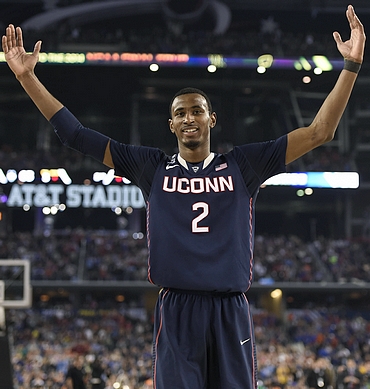 Although his release isn't ultra-quick, he has a high release point on his shot, which coupled with his size allows him to get his jumper off from a very difficult vantage point for defenders to contest. He was effective both with his feet set and off the dribble this season, and has the added bonus of being able to hit difficult turnaround jumpers from the mid and low-post over either shoulder, something UConn head coach Kevin Ollie utilized frequently as the season moved on.

Daniels played a variety of roles and positions for UConn this season, seeing time at small forward, power forward and even at center in small doses depending on the matchup, something that's possible thanks to his superior size and length. Although his defense was very inconsistent for most of the season, he showed great potential down the stretch when he was fully engaged and dialed in, showing the ability the lock down perimeter players and big men alike with his long reach and solid footwork. He shows nice timing as a shot-blocker, allowing him to average a solid 2+ blocks per-40 minutes in each of his three seasons at UConn, sometimes recovering nicely to make a play at the rim even after getting beat off the dribble.

Adding strength will be a major priority for Daniels, as he doesn't deal very well with contact on either end of the floor. He didn't put on much weight in his three years of college seemingly, being listed at 195 pounds by UConn this year after weighing 193 pounds four years ago at the NBPA Top-100 Camp.

Daniels is not a great ball-handler, showing a very high, loose dribble that mostly relegates him to being a straight-line driver, something he was able to do semi-effectively at the college level by being used as a mismatch threat from the elbows with his very long strides. When asked to create from further away, Daniels struggles, rarely getting all the way to the rim due to his average first step, lack of strength and tendency to shy away from contact. He converted just 49% of his half-court attempts inside the paint this season, a fairly poor rate, and got to the free throw line just 3.3 times per-40 minutes, the fifth worst rate of all college prospects in our Top-100 rankings.

Only generating 17 assists in 1100 minutes (one ever 65 minutes) this season, Daniels also ranks not only as one of the worst passers in this draft (dead last in our Top-100), but also historically as well. Daniels simply doesn't see the court at all once he puts the ball on the floor, as he regularly dribbles into double teams and struggles to make even basic passes to teammates. With his 3.6% assist percentage and .6 assists averaged per-40 minutes, he will be the worst passing small forward to get drafted since Al Thornton in 2007. 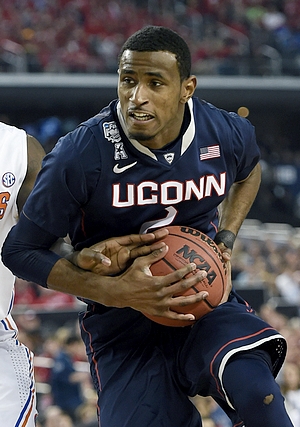 Defensively, Daniels has work to do as well. He shows average fundamentals, often playing hunched over, and not offering a great deal of resistance to stronger players both on the perimeter or inside the paint. While he got significantly better in the NCAA Tournament, his focus wavered here for much of the season, as he didn't always put the best effort here and had a tendency to give up on plays.

Daniels was fairly inconsistent in general for much of his college career, as he didn't crack double digit scoring in 11 of UConn's first 28 games, before catching fire at the end, doing so in 9 straight games leading up to the NCAA Tournament Championship game. NBA teams will have to decide how heavily to weigh the very impressive last month of his college career. Did the light bulb simply finally come on for Daniels? Will it stay on once the NBA season starts? While Daniels is far from a finished product, he's also a year older than his class, having just turned 22 and thus being older than some college seniors.

We've taken a more visual look at Daniels' strengths and weaknesses thanks to UConn game film in the following video scouting report, courtesy of Mike Schmitz.