Erich Doerr
@DraftExpress
The picks have been made and the 2008 NBA Draft is in the books. Using Win Score analysis, we can instantly analyze the drafts winners and losers.

Regardless of who they actually drafted, the Indiana Pacers won the draft on Wednesday night. In dumping Jermaine ONeal, the Pacers acquired the holy trinity of an expiring contract, future considerations, and the best talent in the deal. Expect to see the Pacers return to the playoffs given this excellent take.

On the flip side, the Raptors lost significant depth and are now a threat to miss the playoffs, despite the presence of solid talent in Chris Bosh, Jamario Moon, and Jose Calderon.

For a full Win Score trade analysis, watch the Wages of Wins Journal in the coming days.

As for the impact of draft picks themselves, sure, the Bulls look better with Derrick Rose, though they spent a very valuable asset in the first overall pick to acquire him. Given the value of a teams draft picks and Win Scores analysis, lets give a quick assessment of the drafts winners and losers.

Teams making wise investments which will pay dividends in wins:

-Miamis Michael Beasley projects as a productive player right now and is the favorite for Rookie of the Year. Even given the high value of the second overall pick, Beasleys monster projection beats it. In the second round, Miami hit again by trading for promising PG Mario Chalmers. Miamis lottery days were short, but very sweet.

-The Houston Rockets made some sleek moves in picking up new big men prospects. After last years success with Scola and Landry, the Rockets acquired two new power forwards in Joey Dorsey and Maarty Luenen. Dorseys Win Score marks were exceptional for all four years of college while Luenen continually grew his game over his collegiate career. Since four young, promising power forwards are enough, Donte Greene was also taken, showing both Win Scores potential early in the season and bust-like qualities in the second half.

-The best Win Score draft goes to the Indiana Pacers for picking up solid players in Brandon Rush and Roy Hibbert. Both are NBA-ready and excellent Win Score prospects. Along with their trades, the Pacers are primed to pass .500 this season and are a franchise on the upswing.

-Lottery pick Anthony Randolph is purely a project, and Golden State once again is taking a chance (Patrick OBryant, Ike Diogu). Golden States future is a little dimmer today, though they slightly redeemed themselves by selecting Richard Hendrix in the second round.

-With the third overall pick, Minnesota took O.J. Mayo. While Mayo can grow into a productive player, his brief college career suggests hes just not a productive player yet. Specifically, Mayos turnovers indicate hes many years away from playing as an effective point guard, and Minnesota will have to hope he can live up to his defensive reputation to make this pick look good. Overall, the Timberwolves last three drafts had them taking Mayo over Kevin Love, Corey Brewer over Joakim Noah, and Randy Foye over Brandon Roy. Each of these decisions can be seriously questioned given Win Score analysis.

Just when I thought you couldn't get any dumber, you go and do something like this... and totally redeem yourself!

Minnesota may be learning from their mistakes after all. ESPN is reporting a mega-trade with Mayo and Kevin Love swapping teams, dumping some ugly three year deals on Memphis, and moving Mike Miller to Minnesota in the process. The Wolves are left with a talented front court in front of poor guards and Memphis winds up with a glut of good guards with no skilled bigs on the inside. Surely, more trades are in line, but Minnesota sees the light at the end of the lottery tunnel while Memphis is going the other way.

-Finally, according to Win Scores, taking Eric Gordon is a risky proposition. Outside of his poor projection, Gordon is likely going to put up points regardless of the lack of other contributions, and that is bad. In the Wages of Wins, the authors find a high correlation between points scored and pay. While this may sound normal at first glance, the underlying effect is that scorers are overpaid when assessing their total contributions. Gordon may score plenty of points, but if hes doing so inefficiently or not contributing in other ways, a potential contract extension means he could cripple the Clippers for yet another decade. Heres to hoping either Gordon grows into the hype or the Clippers properly recognize his contributions come extension time.

While the sample size will be small, summer league play can provide early insight on the returns of the draft. The summer leagues represent the first professional opportunity for draftees and offer further data points for statistical analysis. A year ago, Kevin Durant's summer league play hinted at his position transition, focus on scoring, and subsequent Win Score underperformance. Durant snagged a mere 8 rebounds in 137 minutes, foreshadowing a disappointing season based on his NCAA Win Score projection.

This summer, there are several angles to follow, including Beasley's transition, small school players adjusting to tougher competition, and undrafted invitees fighting for an NBA job.

Due to similarities with Durant, Beasley's rebounding and role will be something to monitor. Can Beasley come through on his strong statistical promise or will he underperform expectations like his good friend Durant?

The summer leagues also display small school players transitioning to play against better competition. In particular George Hill, J.R. Giddens, and Jason Thompson are names to watch. Each comes from a small school with strong Win Score marks and few games against top NCAA programs. Were their high marks illusions built against weak competition or are they truly quality NBA players in waiting?

Finally, a handful of undrafted players will compete for NBA jobs. Win Score favorites Chris Lofton, Aleks Maric, Reggie Williams, and Pat Calathes did not hear their names called on draft night and will have to fight for a roster spot through the summer and preseason. Can they beat the odds and make a roster?

The summer leagues will be our first glance to the answers of these questions and the season that lies ahead.

Handicapping the Rookie of the Year Race

Looking forward to 2008/2009, four strong rookie of the year candidates step forward. Michael Beasley appears to be the top talent in the draft and is poised to post a barrage of offensive statistics. The Heat will assuredly vastly improve in the standings, garnering Beasley even more attention. Among these four players, Beasley sticks out as the odds on favorite.

Two 2007 draftees also come to mind. Greg Oden will be coming off a delayed rookie season and could be rewarded for position scarcity and a defensive presence. Fellow Trailblazer Rudy Fernandez also appears to be a high quality NBA player after a fantastic season in Europe, though he faces stiff playing time competition. While Portland is likely to break into the playoffs, voters may split their support between these teammates.

Finally, Minnesotas Kevin Love projects great NBA potential and is likely to surprise most observers. Of the aforementioned contenders, Love wound up on the poorest quality team, giving him a chance to steal the spotlight and help his squad beat preseason expectations.

Now that the draft is over, which NCAA players should be monitored as future promising prospects? Using DraftExpress's NCAA database and 2009 early mock draft, the following table summarizes the recent performances of the projected draft class. 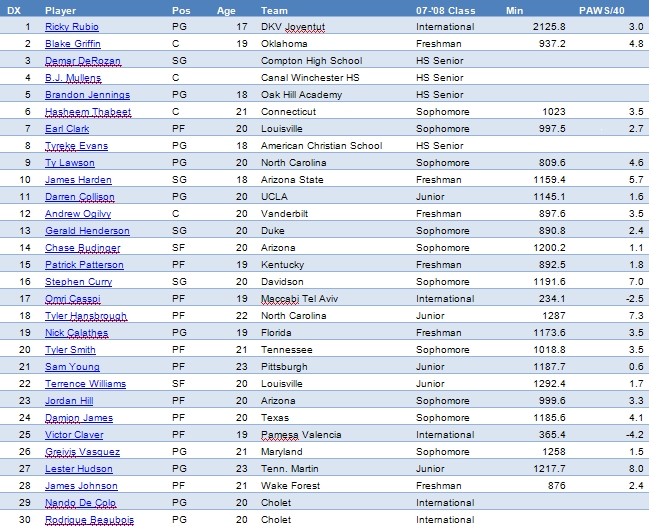 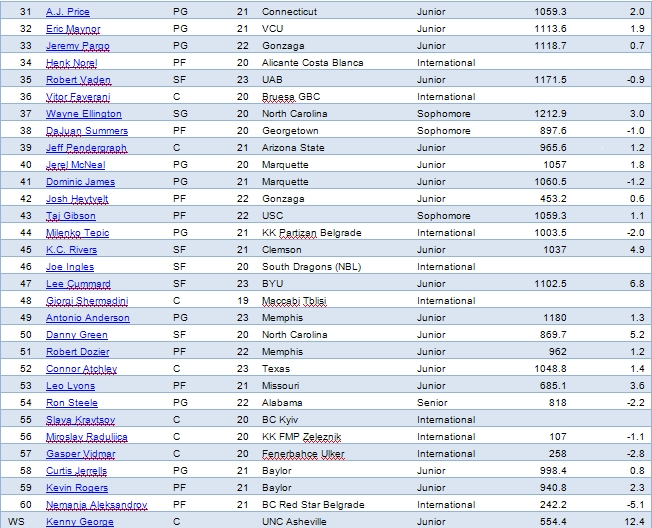 Currently projected as number 1, International player Ricky Rubio has a lot of things going for him. While only 17 years old, Rubio already has played professionally for three years. Over his career, his numbers have shown growth and already appear very intriguing for a guard. In 2007-2008, Rubio posted a 2.7 PAWS/40 in the ACB and a 4.7 in the ULEB. Given their PG status, it will be intriguing to watch Rubios mock projections against Derrick Roses performance over the coming season.

Blake Griffin looks ok, but nowhere near great when compared to Beasley and Love. Hopefully a years maturation will allow his stats to catch up to his mock draft projection.

SG James Harden of Arizona State shows a lot of statistical promise, though his numbers fade a bit when focusing on tougher competition. Harden would likely catch a lot more attention if Arizona State picked up the pace and allowed him to compile comparable raw stats to grab attention.

Stephen Curry appears to be a solid prospect, statistically worthy of the lottery. His tournament performance matched Rose and far outshined Bayless, Gordon, and Mayo this year.

North Carolinas Tyler Hansbrough improved on the 4 PAWS/40 of his first two years and clocked a 7.3 performance in 2007-2008, putting him just behind the marks of Speights and Dorsey (albeit before a costly pace adjustment). With UNCs core returning, will a national championship make him a projected lottery lock?

In the second round, Lee Cummard will have to prove himself against some tougher competition before winning a Win Score endorsement, while K.C. Rivers already has done that, posting a 4.5 PAWS/40 against top 100 competition.

Finally, at the bottom of the list is 7'7" behemoth Kenny George, a physical outlier with plenty of questions on health and competition. His statistics are quite gaudy, easily surpassing Beasley and any other NCAA player I have ever measured. How he'll transition is a huge question, but as of right now I'd clearly rate him as worthy of a first round risk while the current mock draft doesnt include him. We'll see if the mock drafts catch up or if the questions grow deeper by next June.

Well, that about does it for Win Scores and the 2008 NBA Draft. I hope you enjoyed the material, continue to follow Win Score analysis, and look forward to the 2009 NBA Draft.