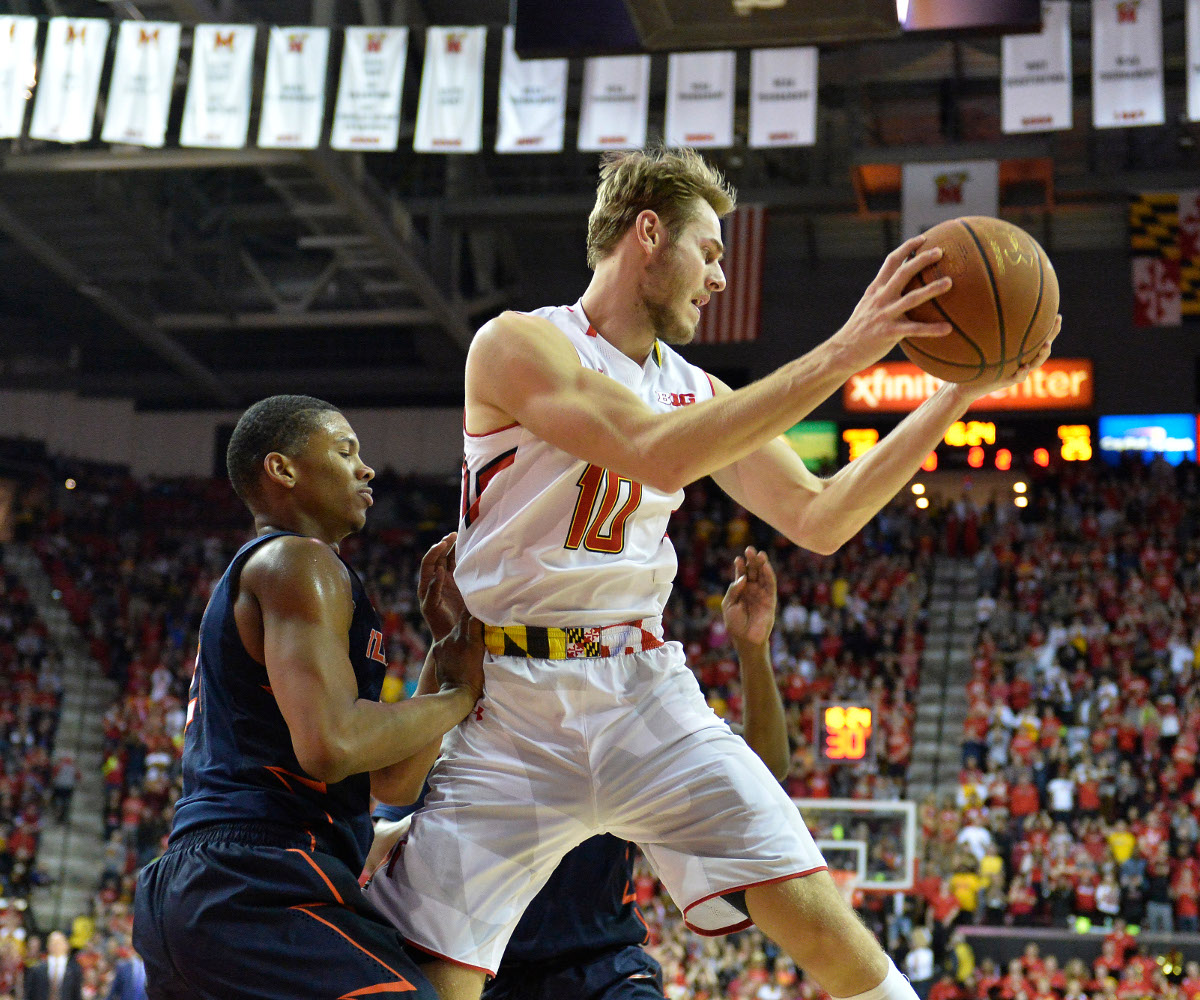 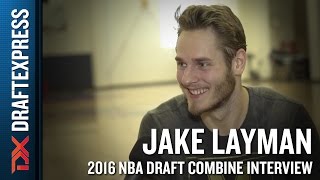 Jake Layman finished his solid, yet inconsistent, four year career at Maryland as a role player for a team that wound up in the Sweet Sixteen. He has plenty of attributes that project him to be a viable NBA prospect, but he also several pressing questions to address to ensure he can carve out a fruitful NBA career.

Playing alongside the likes of Melo Trimble, Diamond Stone and Robert Carter, Layman wasn't a major focal point of the Terrapin offense. While able to operate as a stretch 4-man as a junior, Maryland's glut of big men inside pushed him to the small forward position primarily as a senior, and gave him far less room to operate with the ensuing decreased spacing.

Layman put up modest numbers as a senior, averaging 15.4 points per 40 minutes pace adjusted on only 10.2 field goal attempts, lowest among small forwards in our top 100. While he came on very strong towards the end of the season, too often he was content to defer to his teammates and drift around the floor for his college career as a whole, showing frustrating passivity.


Listed at 6'9, Layman is highly fluid and has excellent height for a big small forward or a perimeter oriented power forward, both positions he's played and can make an impact at in the NBA. Matched up against power forwards, he should have an athletic advantage with his speed, agility, length and leaping ability. Layman is one of the more explosive leapers you'll find, regularly taking off from extreme vantage points to make impressive plays around the basket.

He has put on over 30 pounds since his freshman year, and has considerably bulked up but could probably add some additional strength to his excellent frame, especially in his lower body as he has a tendency to get pushed around and bullied on the interior.

With his 39.9% three point shooting mark and 64% true shooting percentage, Layman has the perimeter shooting skills to match his appealing athletic profile. He's primarily a catch and shoot player with over 80% of his jump shots logged by Synergy Sports Technology taken without a dribble. His stroke is pure and he has a quick release when he shoots in one motion off a catch that should allow him to get his shot off against NBA defenders.

Not only can he be inconsistent from an aggressiveness standpoint, he has been an up and down shooter from game to game and month to month. He topped out at 53% on 3's in six February games while bottoming out at 32% in six November games, as his confidence tends to waver quite a bit depending on how things are going for him. NBA teams will want to see him become a steadier, more dependable shooter, particularly if asked to come off the bench and make an impact on the game in smaller spurts.

Layman will need to find a counter move to his jump shooting so he can have a secondary way to score. He will need to incorporate an ability to shoot off the bounce, either with an escape dribble for a three or a one dribble mid-range pull-up for when defenders run him off the line. He's not very comfortable creating off the dribble at this point which further limits his ability to attack closeouts.


The few times he did look to dribble drive, he didn't have the best success as a playmaker. He isn't much more than a straight line driver to the rim and he can be pushed off his line by physical defenders. He needs to absorb contact better in the restricted area, often choosing to fade away from the help defense rather than looking to drive into a body and draw a foul. His vision and willingness to find the open man is there, but his passes aren't always on point, lacking the proper pace or accuracy to put his teammates in position to score.

With his athletic profile, and strong lateral quickness, Layman has the potential to be a versatile stopper with multi-positional defensive prowess. He can be a real playmaker here, playing the passing lanes for a steal or rotating over for a huge block at the rim, but his consistency is a question mark on this side of the floor as well. Layman has a tendency to drift defensively and can be a step slow to react to off-ball movement or dribble penetration. Bringing a high level of effort and intensity every possession could turn him into a more well-rounded defensive player and help him provide more value to his professional team. To his credit, Layman improved on this part of his game as his career moved on, and it's rare to find a 6'9 player who can effectively guard three positions like he showed the ability to at times.

He pulled down just 5.5 defensive rebounds per 40 minutes pace adjusted, not really showing an aggressiveness on the glass. He didn't show any intent to box out his man and could be pushed under the basket and taken out of rebounding position. Increasing his strength will help, but he'll also need to raise his toughness quotient to help his team rebound and end possessions, and also not get bullied by traditional interior PFs.

Layman has many of the qualities coveted by NBA teams with his size, shooting, and terrific athletic ability. When he's playing with the type of confidence and aggressiveness we saw in the last two months of the season, he looks every bit the part of a first round pick. Improving his toughness and mental approach will cement his chances of carving out a long career, but athletic, shooting combo forwards in his mold are all the rage in today's NBA, and he'll get plenty of chances to find his niche.
Read full article

Matt Williams
@DraftExpress
We've seen somewhat of a resurgence the past ten games (15 ppg, 60% 3P%) from Jake Layman, Maryland's tall, athletic and highly versatile combo forward who came into this season projected as a first round pick. Layman looked far too content fading into the background of this deep and talented Maryland squad earlier on in the year, not demonstrating the kind of assertiveness or toughness you'd hope from a senior, and often looking like a real tease.

He's been significantly better as of late, culminating in posting a career high 27 points on 5/8 shooting from beyond the arc against South Dakota State in the Round of 64. Scouts will want to see more of that from Layman, who ticks quite a few boxes as a NBA prospect, and it's unlikely that Hawaii will have many answers for a small forward with his physical tools and talent if he's being aggressive.
Read full article