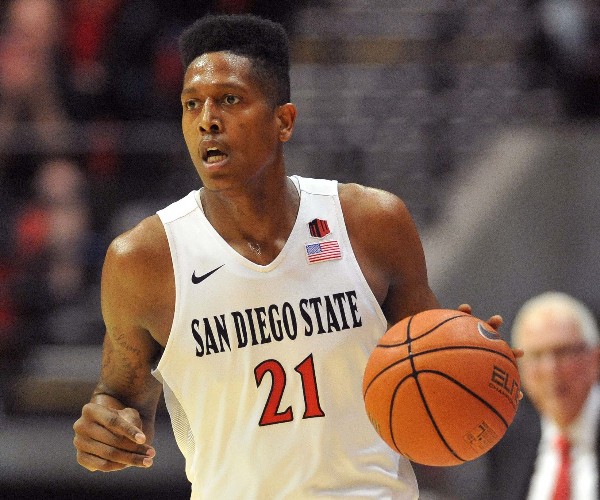 One of the most enigmatic prospects in the college game, Malik Pope averaged 5.3 points and 4.3 rebounds per game through the end of February, getting off to a very slow start before coming on a bit at the end of the regular season. Pope subsequently played his best basketball in the postseason, averaging 12.3 points and 7.3 rebounds per game in the month of March as San Diego State fell to Fresno State in the MWC championship game before making it to the NIT semi-finals. A tremendously gifted but very inconsistent prospect, the Laguna Creek HS (CA) product's play late in the year was a promising sign, but he still has a lot of room to grow to reach his lofty potential and solidify himself in the eyes of NBA scouts. 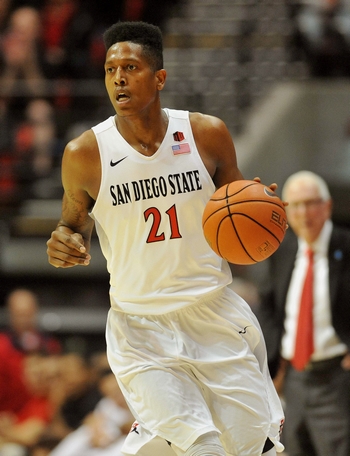 It isn't hard to see what makes Pope such an intriguing prospect, even on first glance. Listed at 6'10 with a 220-pound frame and 7'2 wingspan to go along with terrific fluidity for his size, the Sacramento native is blessed with an outstanding combination of physical tools for either forward spot.

Averaging a below average .836 points per possession over 8.5 possessions per game as a sophomore, despite his strong finish, Pope played a minor, but versatile role for the offensively challenged Aztecs off the bench for much of the year. Doing most of his damage as a spot up shooter, but also given opportunities to create his own shot one-on-one from the perimeter and in the post, Pope was an x-factor for a San Diego State team that excelled on the defensive end and benefitted immensely on the nights he was scoring the ball effectively.

The challenge for Pope was, and continues to be, putting things together consistently on the offensive end. Lacking a great feel for the game and possessing just average basketball instincts, Pope is nonetheless tantalizingly gifted from a skill perspective. Connecting on 39% of his catch and shoot jumpers and 42% of his pull-ups, Pope is a very capable perimeter shooter with good range, however, he often simply flicks the ball at the rim rather than following through, leading to some very erratic misses. Struggling through extended cold streaks as his mechanics are inconsistent and resemble more of a fling at times, Pope still flashes the ability to spread the floor, making shots off the dribble over the defense in isolation, and even score in pick and pop situations, which at his size, is certainly enough to keep the interest of NBA scouts through his ups and downs.

Surprisingly smooth putting the ball on the floor, tossing in hooks in the post, and finishing explosively above the rim in transition or for tip dunks on occasion, Pope truly does shine at times offensively. Unfortunately, his aversion to contact makes it difficult for him to make his impact felt with any kind of regularity. Shooting just 41% around the rim in the half court, Pope's lack of toughness leads to him tossing up difficult floaters on the move from the midrange instead of attempting to draw contact and score in close. Attempting a paltry 1.4 free throw attempts per game last season, Pope's ability to become more aggressive and rely less on his touch to score is a point of interest moving forward, as he has a lot of room to improve as a finisher.

Posting an assist-turnover ratio of just .72 and pulling down just 1.8 offensive rebounds per-40 minutes pace adjusted, Pope's feel for the game is a work in progress as well. The 20-year-old is still early in his development of understanding how to make the most of his unique skills and impressive athleticism, disappearing at times and making baffling decisions with the ball. Given San Diego State's dearth of reliable scorers, scouts will be paying keen attention to how Pope asserts himself as a junior, as he'll have no shortage of opportunities to emerge as their top option.

Defensively, Pope is an intriguing and impactful player when he's motivated and competing. His combination of length, quickness, and leaping ability allow him to make some impressive plays blocking shots, defending smaller players on the perimeter, and cleaning the glass. However, much like on the offensive end, his lack of physicality and inconsistent motor makes it difficult for him to defend the post and stay in front of his man as often as you'd like.

Maligned by NBA scouts at times for his poor conditioning and overall approach to the game, the 2016-2017 season will be a critical one for Pope's NBA prospects, as he looks to rebound from a disappointing sophomore season. The talent is obviously there for him to emerge as a viable prospect, but his inability to impact games consistently is a real concern. The departures of Skylar Shepard, Winston Shepard, and Angelo Chol open up a void for the Aztecs inside and whether Pope is able to fill it is worth keeping an eye on moving forward.
Read full article

DraftExpress
@DraftExpress
-San Diego State freshman Malik Pope measured 6'9 in shoes with a 7'2 wingspan and a 212-pound frame. His standing reach of 9'0.75 places him in elite company. Only two NBA small forwards have a standing reach over 9'0.5: Kevin Durant and Austin Daye. Similarly, only a handful of small forwards have a wingspan over 7'2: Durant, Daye, Trevor Ariza, James Jones, Anthony Randolph, Rudy Gay, Kawhi Leonard, Al-Farouq Aminu, Jerami Grant, Damien Inglis, and Shawne Williams while even fewer stand at least 6'8 without shoes: Steve Novak, Mike Dunleavy, David Wear, Chandler Parsons, Quincy Miller, Durant, and Daye. Pope was one of the first players cut from the camp by Sean Miller and his staff, but his physical attributes and skill-level indicate he will be watched very closely by NBA scouts as a sophomore at SDSU.
Read full article