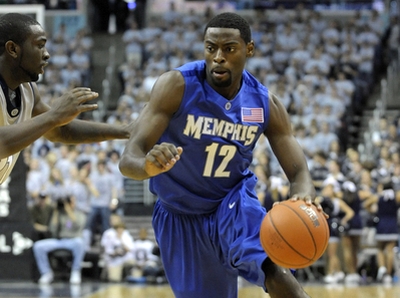 Doug Thonus
@DraftExpress
Check out all of our measurements and see how prospects in this class stack up with players in our database from the last 10+ years. Keep in mind that you can sort them by position and by where they were drafted with the help of the drop-down menus on top.

Opinions on how important measurements really are vary greatly, but they are still widely anticipated both by NBA draft fans and talent evaluators, as they present a completely objective way of comparing prospects against each other. Here is a quick look at some of the interesting facets of this year's measurements.

First, and perhaps most importantly, this year's measurements were taken early in the morning. As the day wears on, the back compresses making a person slightly shorter in the evening than in the morning. When looking at the three North Carolina players and how they measured out last year without shoes compared to this year, we see some serious growth.

As you can see, all three players measured out a half-inch taller this year than last year. While we're not going to change the numbers, it may be best to view this class as a half inch shorter than their listed measurement compared to last year's class. We've seen some fluctuation happen in the past too, but not quite as pronounced as this year. For the purpose of the discussion below, we're considering the numbers to be legitimate.

-Blake Griffin measured out well from a height perspective, but he doesn't appear to have great length at all. His standing reach and wingspan are both far below average for a power forward, which likely helps explain why he is such an unimposing defender and shot-blocker. In fact, amongst the 42 power forwards in our database who were selected as top-15 picks, Griffin is just a quarter of an inch from ranking dead last in the wingspan category, and an inch from ranking dead last in standing reach. Yikes.

-Hasheem Thabeet measured out extremely well, which probably doesn't come as a surprise to anyone. He's going to be a monster in size even in the NBA, as his wingspan ranks 9th longest in NBA measurement history amongst players who were drafted, and his standing reach ranks 5th.

-James Harden had very nice measurements for a two guard, which should help ease many of the concerns scouts had with him. There was some talk that he may measure at 6-4 or less, but instead he came out with good height, weight, wingspan, and reach for a shooting guard.

-Jordan Hill came up with good height measurement, a nice wingspan, and a solid 9-0 standing reach. For comparisons sake, he looks almost identical in size to what Amare Stoudemire measured in at in 2002, and thus will also likely be able to play some center even as he continues to fill out his frame.

-Tyreke Evans came out very big in the measurements for a guy who may play some point guard, at over 6-5 in shoes and with a 6-11 ¼ wingspan that is identical to Blake Griffin's, and is the largest of any point guard ever measured in our database. For comparison's sake, he measures out slightly larger than Dwayne Wade and Jamal Crawford across the board.

-Stephen Curry has similar size to Jerryd Bayless. His height isn't the biggest issue here, as he came out quite solid at over 6-3 in shoes, but his extremely low standing reach and wingspan are. Since we started compiling wingspans, the only successful two guards in the league with a wingspan so small have been Allen Iverson and Monta Ellis. See how he ranks amongst point guards for yourself. It's understandable now why so many scouts consider him to be a potential defensive liability in the NBA.

-DeJuan Blair's height of 6'5.25 without shoes may cause some teams to raise an eyebrow, but they will likely look at his other measurables as well. For comparison's sake, Blair is a quarter of an inch taller than Jason Maxiell without shoes, and an inch shorter than Paul Millsap. In terms of wingspan (7-2) and standing reach (8-10 ½), Blair is slightly longer than Millsap and comparable with Maxiell. He's nowhere near Elton Brand's mammoth proportions, thoughBrand has a 7-5 1/2 wingspan and a 9-2 standing reach.

-Jonny Flynn's obviously measured out small, but many guards who can get into the lane at will have had similar measurements such as T.J. Ford and Chris Paul whom both measured out a bit smaller on the whole. Flynn, Patrick Mills and Ty Lawson are all similarly sized to Allen Iverson, Raymond Felton and Jameer Nelson, and are bigger than Aaron Brooks. See how they stack up here.

Flynn also has a very nice 6-4 wingspan, much like D.J. Augustin did last year. All in all his measurements look very comparable to Chris Paul's.

-Jrue Holiday is the third biggest point guard measured, at 6-3 ¼ without shoes. He also has the fifth biggest wingspan and third biggest standing reach. See how the point guards in this class stack up here.

-B.J. Mullens measured in as a physical freak in size, much like expected. He is also likely going to test in as a phenomenal athlete based off what we've seen from him in terms of his running and leaping ability. Unfortunately his wingspan is not very impressive for his height, which may help explain why he was such a poor defender and rebounder in college. Mullens' wingspan looks similar to that of Kwame Brown and Spencer Hawes, although much like Chris Kaman, he compensates for that with an excellent standing reach.

-Chase Budinger's height came in as expected, but he has a serious case of gator arms with extremely short standing reach and small wingspan for his height. His wingspan is similar to that of Jason Kapono, Matt Carroll, Travis Hansen and Luke Jackson, which again may help explain his deficiencies on the defensive end.

-Tyler Hansbrough may get the most out of the measurement process. For a guy often accused of being 6'7, he measured in at nearly identical size across the board to Blake Griffin. Hansbrough is half an inch bigger than the player he likes to compare himself to in David Lee, with a wingspan and standing reach half an inch shorter. He should have no problem as far as his size is concerned at the power forward position in the NBA.

-Earl Clark measured out exceptionally well, at over 6-10 in shoes with a wingspan of 7-2.5. From a measurement's perspective, he can be compared with players such as Danny Granger and Rudy Gay at the small forward position.

-A player who might deserve a second look is Taj Gibson, after measuring a legit 6-10 in shoes with a tremendous 7-4 wingspan. If a team feels like they are able to put on weight to his slender 214 pound frame, despite the fact that he turns 24 the day before the draft, he could go much higher than anticipated.

-Austin Daye had great measurements at nearly 6-11 in shoes with a near 7-3 wingspan. With that said, his 192 pound frame is over 20 pounds less than Kevin Durant and 5 pounds less than fellow broomstick Anthony Randolph, which will surely hamper him on the defensive end until he fills out.

-Eric Maynor also weighed in at just 163 pounds, similar to T.J. Ford and Aaron Brooks a few years ago.

-Players with wingspans and standing reaches far better than you would expect based on their height: Jeff Adrien (even longer than DeJuan Blair), Rodrigue Beaubois (Rondo-esqe with his 6-10 wingspan), Derrick Brown (a legit face-up power forward with his 7-2 ½ wingspan and 225 pound frame) and Jeff Teague.
Read Next...