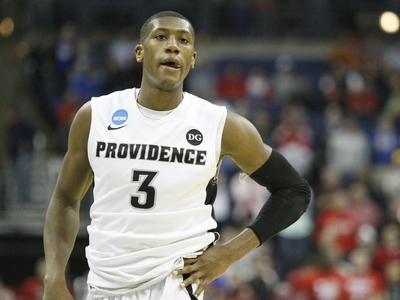 Jonathan Givony
@DraftExpress
With the 2016 NCAA Tournament Bracket officially set, we can start to analyze how the Round of 64 is shaping up from a NBA Draft perspective. Who are the prospects and what will NBA teams be looking for in different matchups?

While the NCAA Tournament is not end-all scouting dealbreaker some make it out to be at times, it serves an important purpose. For one, it is often the last chance NBA teams have to watch college players in live five of five competition action prior to individual workouts. It also creates some unique matchups on neutral courts in a high-stakes, pressure-packed environment that takes the players out of their normal routines and comfort zones they find during conference play. With four games going on each day early on in the Tournament, scouts can bounce around different venues and get a live look at a huge number of prospects, which is especially useful for smaller-school players who rarely match up against NBA-sized competition.

Arizona likely wasn't expecting to face such strong competition already in the first round of NCAA Tournament, but they will be tested mightily right off the bat.

Both Vanderbilt and Wichita State were considered likely NIT participants by most experts after falling earlier than expected in their conference tournaments following disappointing regular seasons, but both have legitimate prospects on their roster. The two will match up in Dayton in the First Four on Tuesday in what will be a very interesting game, for the right to face Arizona in Providence on Thursday.

Vanderbilt has a pair of projected Top-20 picks who could both very end up in the NBA Draft lottery in June in Damian Jones (#15, DX Top-100) and Wade Baldwin (#17). They will face seniors Fred VanVleet (#93) and Ron Baker, who are among the most recognizable names in college basketball after leading Wichita State to the Final Four two years ago and upsetting Kansas in the NCAA Tournament last year.

For Arizona, this is a big game for freshman Allonzo Trier (#61), who is likely to enter the 2016 NBA Draft, according to sources, and is hoping to show enough in the NCAA Tournament to convince scouts he's worthy of being one and done. The 20-year shooting guard lives at the free throw line, is making 37% of his 3-pointers and has improved quite a bit defensively since arriving in Tucson. His average physical tools and poor passing ability has made it difficult for him to get his stock off the ground, but facing the likes of Baldwin or Baker could help him start to change scouts' minds.

Stony Brook senior big man Jameel Warney (#95) had arguably the most impressive performance of any player in conference tournament action this weekend, scoring 43 points (18/22 FG) to go along with 10 rebounds and 4 blocks as his team took down Vermont in the America East finals.

After a strong showing against Damian Jones and Vanderbilt in non-conference play in November (http://www.draftexpress.com/video/12098/), Warney now has another chance to show what he can do against another, much stronger SEC frontline in Kentucky, particularly vs freshman Skal Labissiere (#10) who has been maddeningly inconsistent all season.

Warney does not have great height, length or athleticism, but is extremely skilled inside the paint and has an outstanding feel for the game. If he can show his production can translate against the likes of Labissiere, Alex Poythress (#89), Marcus Lee and Isaac Humphries, his stock will soar heading into the pre-draft process.

Redshirt junior Kris Dunn (#5) has been up and down throughout the season, but has a chance to deliver Providence their first NCAA Tournament victory since 1997, something that was widely expected once he surprisingly passed up the chance to be a lottery pick last year to return to school. He'll be helped by sophomore Ben Bentil (#84) who has had a breakout season and is one of the most prolific scoring big men you'll find in the college ranks, both inside the paint and on the perimeter.

While on paper, USC has a very young team, they actually have some nice prospects to throw at Dunn and Bentil to try and slow them down. 6'4 junior Julian Jacobs is one of the few collegiate point guards who is just as physically gifted as Dunn, and he has both the frame to get into his body and the quickness to try and stay in front on the perimeter. Scouts will get a better feel for Dunn's ability to run a team and create his own shot in this game than they normally do vs Big East competition.

For USC, freshman Chimezie Metu (#28, DX 2017 Mock Draft) is an athletic big man who can protect the rim and should be able to give Bentil problems inside the paint. Fellow freshman Bennie Boatwright is a skilled stretch-4 who is also getting some NBA looks and will force Bentil to play defense when the two are matched up, something he's not always fond of. Bentil is reportedly highly likely to enter this year's draft, so he will certainly want to go out on as high a note as possible.

Shooting 8/42 (19%) from the field the past four games, physically gifted freshman Jaylen Brown (#3) has struggled quite a bit thus far in the month of March. He'll have to re-find his scoring touch for Cal if they are going to have any chance of making a NCAA Tournament run.

Ivan Rabb (#14) will have a huge size advantage inside the paint against Hawaii's 6'7 PF Mike Thomas, but may actually be the one tasked with defending their stretch-5 Stefan Jankovic, a Missouri transfer who has a very high skill level. Jankovic averages a robust 24 points per-40 (61% 2P%, 38% 3P%) and can score from all over the floor, but has a reputation for being extremely soft defensively, which makes this an important game from his standpoint as well.

While many players have hit the wall late in the season, Isaiah Whitehead has run straight through it, averaging 27 points, 7 rebounds and 5 assists per-40 minutes on 47% 3-point shooting over his last ten games. He led Seton Hall to their first Big East tournament championship in 23 years along the way, and has piqued the interest of NBA teams who had mostly written the 21-year old off after a very lackluster first season and a half of college basketball.

Seton Hall will have their hands full with Gonzaga's talented frontcourt, led by projected first round pick Domantas Sabonis (#26) and 6'9 senior Kyle Wiltjer (#83). Sabonis is a tremendous competitor who hauls in a robust 15 rebounds per-40 minutes alongside Wiltjer, who is one of the most skilled big men scorers (25 points per-40) in college basketball.

Few players helped themselves in conference tournament play as much as DeAndre Bembry (#42) did this weekend in the Atlantic 10 Tournament at the Barclays Center in Brooklyn. Under the watchful eyes of numerous NBA scouts in New York, Bembry had 60 points, 18 rebounds, 15 assists, 5 turnovers and 3 blocks on 24/42 from the field in three games, helping his team win the championship.

Bembry has a chance to further improve his standing in the eyes of NBA teams with an intriguing matchup with a hard-nosed Cincinnati team, one of the best defensive units in college basketball according to most metrics. The Hawks will need his full array of versatility as a tall ball-handling wing who can do a little bit of everything to overcome this strong and athletic group. This is likely the toughest team St. Joe's has faced since early in the season, making it an important game for him.

Weber State big man Joel Bolomboy (#73) hasn't played a single NCAA Tournament all season besides Summit League champions South Dakota State. With all due respect to the Jackrabbits, NBA scouts will be anxious to see how the physically gifted big man looks against professional caliber big men like the ones Xavier can throw at him. 6'10, 23-year old Jalen Reynolds is a physical specimen who should serve as an excellent matchup to evaluate the Big Sky Player of the Year against.

While scouts are there, they'll also take a look at the progression of Xavier freshman Edmond Sumner, a tall, athletic and extremely talented point guard who will certainly be drawing interest in coming years. His matchup with Big Sky First-Team All-Conference point guard Jeremy Senglin will go a long way in deciding who wins this game.
Read Next...