Mike Schmitz
@Mike_Schmitz
Recapping the ten most impressive performances from day one of the competitive action at the NBA Combine. 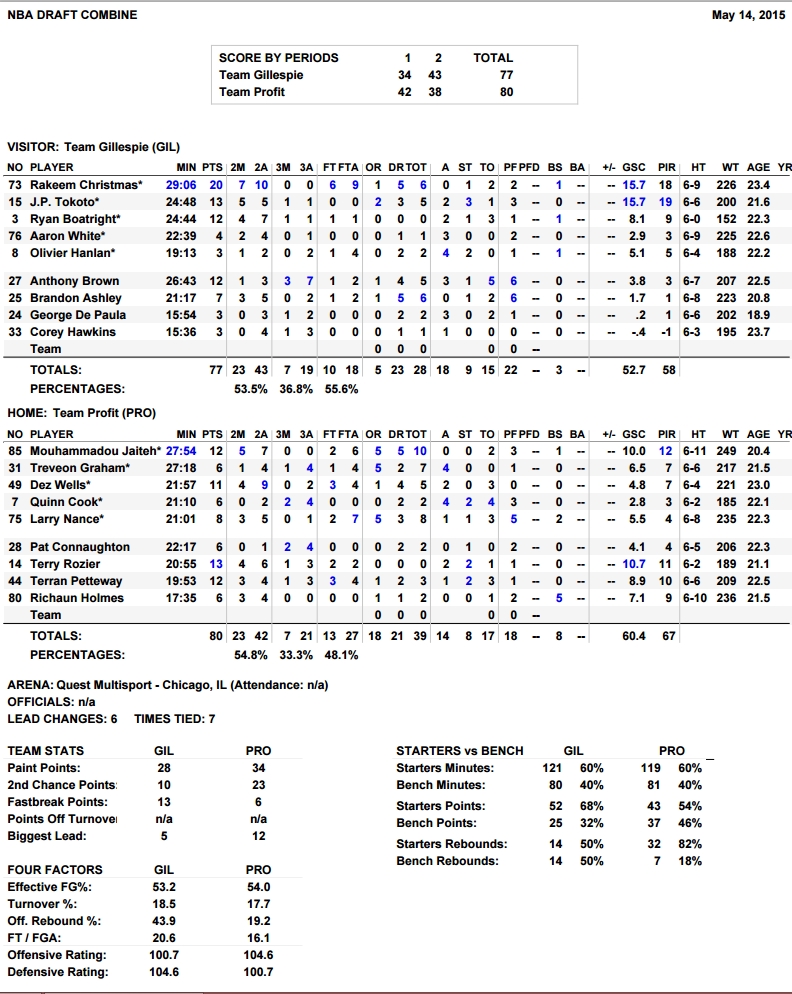 The 6' 9 big man was one of the best players between both groups on Thursday, showcasing a much more polished offensive game than we saw at Syracuse. Known mostly for his rim protection, offensive rebounding and ability to finish (thanks to his 7' 5.25 wingspan) with the Orange, Christmas scored in a variety of ways on Thursday. The Virgin Islands native knocked down a handful of mid-range jumpers, including a step back going to his right. Christmas also ran the floor in transition, dropped in a right handed jump hook and showed off his mobility by diving hard out of pick and roll sets. Christmas did a lot of damage facing up from mid-post areas as well. The 23-year-old big man shot nine free throws, in large part due to his ability to jab right, put it on the floor going left, and sweep his arms through the defender to draw the foul  he even dropped in an And 1 floater on one occasion. Christmas scored in a variety of ways on Thursday and did a couple of things scouts and executives questioned about his game during his four years in college. Christmas certainly helped himself on day one of the NBA Combine.

Tokoto did exactly what he needed to do, playing strong defense, finishing emphatically with his tremendous athleticism, and showing some improvement as an outside shooter, which is a very positive development considering how much he struggled with this part of his game at UNC. Tokoto clearly has been working hard on his mechanics and consistency since electing to enter the draft, and the fact that he was able to step into his shot so confidently and knock down jumpers is a good sign for his future, even if it's obviously a very small sample size.

The youngest player participating at the Combine, and also possibly the most highly touted, George de Paula stepped into a very difficult situation and ended up having a fairly positive performance that will undoubtedly help his draft stock moving forward.

De Paula was significantly more aggressive than he was in Portland at the Nike Hoop Summit, making some outstanding passes using both sides of the floor, playing at different speeds while showing off slick ball-handling skills, strong court vision, and very nice creativity for a 6-6, 18-year old point guard. He absolutely towered over any of the opposing point guards he matched up with, which helped him see over the top of the defense and also match up with a few different positions, displaying nice versatility in the process. His defense is more potential than actual production right now, as some of the older players were able to take advantage of him with their superior strength and experience, despite trying to be competitive, and he wasn't quite able to figure out how to utilize his tremendous length as much as you might hope considering how physically gifted he is. He also had a few moments showing his youth, airballing a 3-pointer and making a few careless passes.

It would not have surprised anyone if De Paula went into a shell and had a very quiet outing here in Chicago like he did in Portland, but instead he stepped up, was assertive and showed all 30 teams in attendance just how talented he is, even if he remains at least a few years away from reaching his full potential.

Richaun Holmes did a great job of acquainting himself to the many NBA executives who were likely only laying eyes on him for the very first time. He passes the eye test immediately with his ripped 6-10 frame, solid length and terrific athleticism, but also managed to put his tools to full use as well, coming up with one monster tip-dunk, and blocking a number of shots around the basket, seemingly coming out of nowhere. Holmes has terrific feet for a player his size, which gives him great potential as a defender when combined with his outstanding physical attributes and excellent timing. He's not particularly skilled, but seems to have plenty of upside to continue to grow into, and appears to have all the makings of a future NBA rotation big man. He clearly helped himself today.

The French big man was the most productive player on the floor for the winning team, having a very strong outing that seemed to resonate with the NBA executives in attendance. He crashed the offensive glass consistently with his outstanding combination of strength, length and soft hands, and also was able to score inside the paint repeatedly after establishing deep post position. Jaiteh's experience playing against men was evident today, as he was extremely aggressive, but also patient enough to know how to find the open man or draw fouls. The only downside was probably his defense, as he struggled somewhat against the equally aggressive Rakeem Christmas, who scored on him a number of times, and also had issues on the pick and roll, looking very straight up stepping out onto the perimeter.

Offensively, Nance was constantly in motion, cutting, sprinting, and hustling non-stop, playing unselfishly and finding ways to contribute without a single play being called for him. Nance's offensive skill-level remains a work in progress and he didn't show the best feel for the game forcing the issue running into brick walls at times, but that goes with the territory of playing in this setting and that is a fairly easy thing to cut out of his game. Players like Lou Amundson have found a way to make a career out of doing the little things Nance displayed in the first game, and continuing along the same path will undoubtedly earn him some more workouts and opportunities to impress NBA teams. 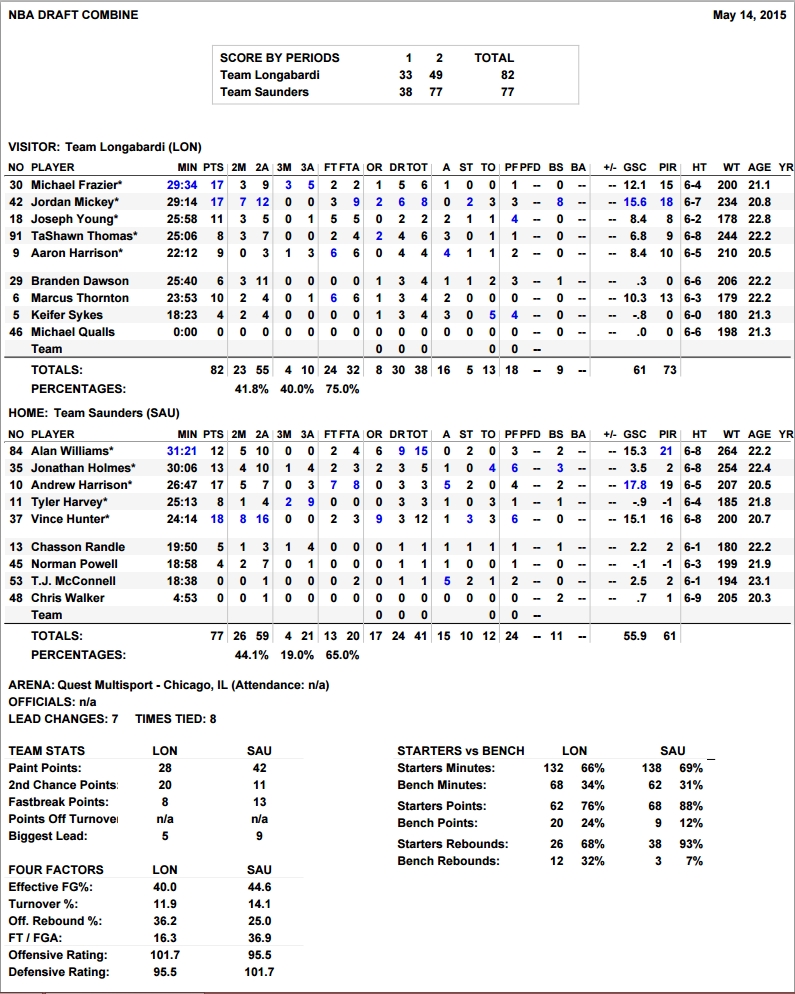 Andrew Harrison played as well as any point guard at the NBA Combine on Thursday, as he controlled tempo, played with excellent pace, changed speeds consistently in the half court and made a few nifty passes while finishing through contact consistently. The 6' 5 Kentucky point guard flashed several different combo moves that, along with his ability to change speeds, helped him knife through the defense and drop it off to bigs around the rim. Harrison also looked very comfortable operating out of the pick and roll, keeping his man on his back, hitting the roll man in stride with pocket passes, and even knocking down a pull back jumper off the bounce. Although he wasn't immune to a couple of contested jumpers early in the shot clock early shot, overall Harrison played with excellent poise, handling pressure and making the extra pass when necessary. Harrison still has room to improve from the perimeter, where he missed all three of his triples, but his pure point guard skills were certainly on display Thursday evening.

The long LSU big man proved to be the best interior defender on Thursday by rejecting eight shots, while altering a handful of attempts around the rim. Thanks to his 7' 3.5 wingspan, tremendous timing and ability to get off the ground quickly, Mickey did an outstanding job projecting the rim, both rotating from the weak side and sliding with his man and blocking shots as an on ball defender. At 238 pounds, Mickey has the strength to battle on the block defensively, and the lateral quickness to contain the ball in the pick and roll and keep his man in front. While most of his work was done on the defensive end, Mickey was fairly aggressive offensively, as he wasn't shy to try and prove he's improved as mid-range shooter. The 6' 8 power forward was a mixed bag from mid-range spots, where he knocked down a couple of open looks but also hoisted up a few bad misses while under duress. Mickey's feel for the game and overall skill level still could use some polish, but his ability to protect the rim and guard his position at 6' 8 along with his mobility give him a chance to play a role as a bench big at the next level.

The 6' 7.5 power forward came out of the gates with non-stop energy and effort on his way to 16 points and 9 offensive rebounds in the first half alone. Although not the most skilled player, Hunter was all over the court on both ends of the floor, crashing the offensive glass relentlessly, finishing around the rim, and diving for loose balls to ignite the fast break. The 20-year-old out of UTEP hangs his hat on his constant motor and proved how he can still impact the game without a refined offensive skill set. Hunter's explosiveness was also on display as he hammered home a couple of rim-rattling dunks, one out of the pick and roll and one off of an offensive rebound. Hunter did show his limitations as a shooter (although he did make one elbow jumper) and scorer on the block. Those limitations coupled with his lack of elite size for the PF position hurt his upside a bit, but Hunter did a great job demonstrating that he has the motor and athleticism to potentially carve out a niche as an energy, athlete/defender at the pro level.

The versatile forward made a handful of impressive plays on both ends that make it easy to envision him having an impact at both forward spots in the NBA. Holmes knocked down shots from the perimeter, attacked the rim in a straight line and even operated as the roll man on some occasions. Although he missed a couple of spot threes and went 1-for-4 from distance overall, the 6' 9 combo forward knocked down two tough step back jumpers (one going right, one going left) that most players his size struggle to pull off. Holmes also impressive as a straight-line driver, displaying a strong first step going to his right, and the strength to keep his defender on his hip once he turns the corner. Holmes had an impact on the defensive end as well, guarding multiple positions and blocking three shots in the process. Although he wasn't overly efficient on Thursday, Holmes did several different things that make him an attractive 2nd round prospect given his physical attributes.
Read Next...