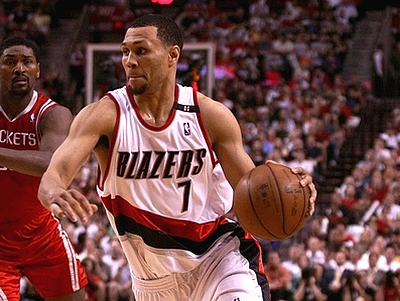 Kyle Nelson
@KNelsonDX
An in-depth look at the roster situations of the Denver Nuggets, Portland Trailblazers, Utah Jazz, Minnesota Timberwolves and Oklahoma City Thunder--what they have, where they are going and who are the players that may be targeted in this upcoming draft.

This season was one of the Nuggets most successful in quite some time, culminating with an appearance in the Western Conference Finals. The Allen Iverson for Chauncey Billups deal worked splendidly, as Billups was a leader on both ends of the floor and in the lockerroom and inspired this team to follow George Karls coaching scheme.

Similarly, what looked like an average off-season seemed very smart in May when Dahntay Jones and Chris Andersen emerged as unsung post-season heroes. Trading Marcus Camby to the Clippers looks brilliant in hindsight, since thats what gave the Nuggets the financial flexibility to trade Iversons expiring contract for Billups long-term deal. Mark Warkentien was named Executive of the Year for a good reason it seems.

Despite the successful season, however, there is plenty of room to improve. After all, the Nuggets never found an answer for the Lakers star players, and looked tired towards the end of the series. This is a team with some significant decisions to make during this off-season, beginning with whether or not to re-sign Jones and Andersen, both of whom will likely command significantly more than the minimum. A similar decision will have to be made about Linas Kleiza.

With that in mind, the Nuggets are in need of some additional depth, a concern that could potentially be addressed in the draft. Their bench is shallow in the frontcourt and on the perimeter and could use a back up point guard, more depth at the shooting guard position, or a post player able to play either power forward or center. With the 34th pick in the draft, the Nuggets have a chance of filling some of these needs, particularly a back up shooting guard, who can put quick points on the board.

Portland overcame the obstacles of youth, injury, and inexperience and won 54 games, making it to the playoffs for the first time since 2003. The Blazers are still a young team, but behind their core of Brandon Roy and LaMarcus Aldridge and solid contributions from rookies Greg Oden, Rudy Fernandez, and Nicolas Batum, there is a lot to like and quite a bit of potential yet to achieve before this team is at its peak.

There are some question marks, however, most notably in terms of their perimeter depth, as they lack a set rotation at the point guard and small forward positions, and could still stand to get tougher in the post. Brandon Roy desperately needs some help on the perimeter, as he is the focal point of the Blazers offense and was exposed at times by opposing defenses who took advantage of how heavy a role hes forced to shoulder in one on one situations at the end of games.

Despite these weaknesses, this team has a bright future and will only get better in subsequent years as its young talent gets better. Portland also has a decent amount of cap space which should allow them to sign one of the better free agents that falls between the cracks.

Kevin Pritchard has been one of the most active General Managers in the NBA and has engineered some of the most ambitious draft coups in recent memories. This year, the Blazers have five draft picks, even though they lack optimal draft positioning. Therefore, expect Pritchard to be active as usual, pursuing depth at the point guard and power forward positions, likely through trades. The team has been very vocal about the fact that they do not need to get any younger, so they may not use any of the picks on players for next years roster. This is not a strong draft, but there will be plenty of maneuvering to be done to help shuffle around their assets and make the team even more of a contender going into next season.

The Utah Jazz is another NBA franchise at a significant crossroads. With a new (yet familiar) owner at the helm, an aging coach, and a roster that might look very different after free agency, this is a team that could be in line for some changes. The Jazz has the potential to be a very good basketball team, with Deron Williams, Carlos Boozer, and Mehmet Okur. They also have some nice young talent, headlined by wing Ronnie Brewer and big men Paul Millsap and Kosta Koufos. Unfortunately, Boozer, Okur, and Millsap will be sought after players in free agency and if they choose to bolt elsewhere, the Jazz will lack the depth to contend in the future. Ownerships willingness to pay the luxury tax in order to keep the frontcourt core together will likely be the deciding factor in how this team looks next season.

With just two picks in this years draft, the Jazz neither will be able to address all of their needs nor will they be able to prepare for a worst-case scenario in the future. Their most glaring needs are in the post, where they may need to start grooming a gritty power forward to take either Carlos Boozer or Paul Millsaps minutes. They could also use a point guard to back up Deron Williams assuming Ronnie Price and Brevin Knight do not return. The team still hasnt found a real go-to guy on the wing to take ball-handling pressure off Williams either. They might not find all the answers in this draft, but there should be some quality rotation players available if they play their cards right. The Jazz needs to have a productive summer in addition to the draft, however, if they want to remain in the playoff picture and sustain their success in the future.

The Minnesota Timberwolves struggled through injuries last season, and despite winning a meager 24 games, there were more moments of optimism than expected. There is a great deal of young talent on this team, most importantly, Al Jefferson, though recent draft picks Randy Foye and Kevin Love showed potential of heading a solid supporting cast throughout the season. Many questions remain surrounding this team that needs to be settled before next season begins. They still do not have a coach or a team culture, and many of the players on the roster are not seasoned winners. There are also questions surrounding whether or not Randy Foye is a long-term solution at the point guard spot. If last weeks massive point guard workout was any indication, he is not, and the Timberwolves are looking for a long-term option in the draft, which is clearly the right direction to head in. New General Manager David Kahn has brought a great deal of energy to the teams front office, and it seems like the TWolves will be very proactive in trying to make moves.

With two first round picks and five draft picks in total, the Timberwolves have the chance to infuse their roster with young talent and add depth in a few key areas. It seems as though they are set on drafting a point guard with the sixth overall pick, although there is a possibility they try to move up to improve their options. With their other picks and considering that much of their underachieving bench is approaching free agency, there are a number of different directions that they can pursue. While their bench is a bit thin across the board in terms of talent, they could use the most help in the post, where they lack depth at the center position. Adding another talented swingman who can create his own shot probably wouldnt hurt either. The Timberwolves could get better immediately if they make the right decisions and definitely are a team to watch on draft night.

The Thunders first year in Oklahoma City was a mixed bag, but certainly left fans excited about the teams future. Kevin Durant emerged as a legitimate NBA star, showing his critics that he could score efficiently, get his teammates involved in the offense, and contribute even without the ball in his hands. Durants supporting cast got better, as well. Combo-forward Jeff Green played more efficient basketball and Russell Westbrook not only emerged as a starter, but also looks to be the franchises point guard.

Add the acquisition of Nenad Kristic to the equation and the Thunder has a roster filled with rapidly improving young talent. In addition, the team is in about as enviable a situation as any franchise in the NBA in terms of their financial flexibility and long-term assets. Playing behind a coach that they trust and respect, the team has a chance to take a big step forward next season. This summer, though, is essential, as this team needs to find more veteran leadership in free agency and has two first round draft picks at their disposal.

The Thunders most significant need lies in the post, where the previous regime drafted unsuccessfully in the past. They are due for an upgrade at either the power forward or center positions. With the third pick in the draft, they can take their pick of this years top, draft-eligible big men, particularly a more defensively oriented player. They may opt to shore up their backcourt somewhat, though, adding another playmaker and perimeter shooter who is willing to play unselfishly within the teams existing pieces. With their late first round pick, they can find another solid player to bring off of their bench and deepen their frontcourt rotation.