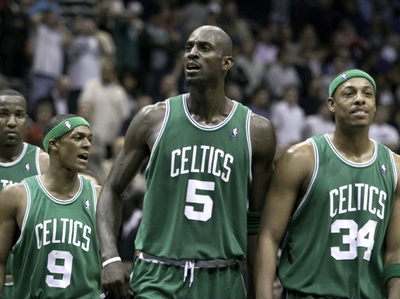 Behind the Big Three, the Boston Celtics had another spectacular season, racking up 62 wins before falling in the second round to eventual championship contenders, the Orlando Magic. They might have gone farther, too, had they not lost Kevin Garnett and Leon Powe to season ending knee injuries. Their playoff defeat, if anything, proved how thin the Celtics bench truly was, and how vulnerable they were without their starting lineup logging upwards of 40 minutes per game.

The off-season may present more questions than answers, however. Both Garnett and Powes long-term health must be called into question and four bench players are unrestricted free agents, which threatens an already delicate rotation. Similarly, despite these contracts coming off of the books, the Celtics salary cap stands at over $72 million, right on the brink of the luxury tax. It is needless to say that GM Danny Ainge has a lot of work to do this off-season if he wishes to build upon his legacy in Boston and find another solid supporting cast for his Big Three.

While the Celtics are hoping for their young players such as Tony Allen, Bill Walker, and J.R. Giddens to crack the rotation in the fall and Ainge is known for draft day maneuvering, there may be a player or two available at the bottom of this years second round that could help fill holes on the bencheven if no one should expect any miracles.

The Celtics will more likely look towards free agency for a veteran presence off the bench, either a defensive oriented big man who can rebound or a scoring guard who knows how to put the ball in the basket and can play defense. Luckily for the Celtics, the precarious financial situation of many NBA teams may leave a number of established players on the market late in the summer, and the goal of chasing a championship ring could help secure some of them. While the Celtics arent going to improve overnight and probably wont get much better through this draft, they should be right back in the mix at the top of the Eastern Conference standings as long as they can stay healthy next season.

The first half of the season was promising for the New Jersey Nets, and it seemed as though the franchise was going to return to the playoffs. After the All Star break, however, it was a different story, as inexperience, injuries, poor depth, and a touch of bad luck situated the Nets just outside of the playoff picture before they finally fell out of sight as the season wound down.

The good news is that there is a lot to like about this roster, from its star power to the improvement of its young players. There are few teams that boast the same degree of frontcourt depth and the perimeter tandem of Devin Harris and Vince Carter is nothing to scoff at, either.

The bad news is that the Nets are a young team, equally rebuilding as well as contending for playoff position, and are losing quite a bit of money in the meantime. Last seasons collapse suggests that despite this teams potential, there is still much work to do. Unless GM Rod Thorn decides to orchestrate a trade, there is not a tremendous amount of roster flexibility or even cash to pursue a free agent in the summer. And dont forget that the Nets are still considered to be on the forefront of the LeBron James sweepstakes next summer, especially now that their move to Brooklyn appears to have the green light. Cap flexibility obviously comes at a premium.

Short term, however, the Nets are looking to make a playoff push and can surely benefit from adding another young piece through this draft. Last year, the Nets drafted center Brook Lopez to fill their need for a scoring big man, and he far surpassed expectations. Ryan Anderson and, to a lesser extent, Chris Douglas-Roberts, cracked the Nets rotation and contributed after the All Star break.

This year, the Nets are most interested in drafting a tough power forward who can rebound, though they are also considering pass first point guards or a versatile wing to play on the perimeter alongside of Harris and Carter. It seems as though all of these types of players should be available at the eleventh pick, giving the Nets a multitude of options going into the draft.

The Mike DAntoni-era began slowly in New York last season, as the undermanned Knicks looked promising early on, but sputtered to a disappointing 32-50 finish. That said, DAntoni did not have a tremendous amount of talent to work with, oftentimes opting to shorten his rotation to just seven players, and playing much of the season without prized draft pick Danilo Gallinari.

Much like last summer, with the front office eyeing the summer of 2010, any free agent signings this off-season will be temporary and likely wont contribute towards building a contender in the Big Apple. There are certainly some solid players on the roster, most notably David Lee and Nate Robinson, although it remains to be seen if either looks to remain in New York this summer. GM Donnie Walsh has a lot of work to do in order to develop this team into a contender, starting with somehow finding a way to unload the considerable deadweight that Isiah Thomas left for him when he took the job. The fact that he managed to clear off a good chunk of it already is commendable.

The Knicks wont be able to address all of the glaring holes in their roster with the eighth pick in the draft, but theyll be able to add a quality basketball player, who can help them build a solid foundation for the future. Most importantly, whomever they draft must be a Mike DAntoni basketball player, boasting solid basketball IQ, creativity on the offensive end of the floor, and perimeter shooting ability.

While it seems as though the Knicks are primarily looking for a point guard to relieve Chris Duhon of his starting duties, there are a lot of versatile players, on perimeter and in post alike, who fit the bill of potential targets for DAntoni and his fast paced system. The Knicks need upgrades at just about every position and should find a good player in this draft capable of helping them out immediately.

When he was signed last summer, Elton Brand was expected to take the Philadelphia 76ers to the next level. Instead, they made the playoffs without him, which culminated a season that witnessed everything from the firing of Coach Maurice Cheeks to a disappointing first-round exit in the playoffs.

This 76ers wont have any cap room this summer to significantly alter their roster, but will likely start next season without starting point guard Andre Miller, among others. While Brands return next season could signal better things to come, this is a team in flux, a core of young role players desperately searching for an identity. The 17th pick probably isnt going to change any of this, but with the recent coaching change and a need to add bench depth, particularly at the point guard position, there is likely an opportunity for a polished player that can step in and contribute immediately.

With Coach Eddie Jordan at the helm, the 76ers may play a more deliberate Princeton-style offense, requiring high IQ players and solid perimeter shooters. A point guard who knows how to put the ball in the basket seems to be the most pressing concern and in this draft, there should be a couple of candidates available by the time the 76ers are on the board. More versatile perimeter shooters wouldnt hurt, either. With a new coach and a new system, the 76ers could go a number of different ways, but it seems as though they can find a solid role player in this draft.

When the Raptors announced that they had brought in Jermaine ONeal to join Chris Bosh and Andrea Bargnani in the frontcourt, it seemed as though the Raptors had turned the corner and were ready to contend in the playoffs. What resulted was a miserable 32-50 season highlighted by a coaching change and a clear-cut lack of defense and toughness. With a popular coach at the helm and a healthy roster, the Raptors may not be nearly as bad as their record indicates. Some off-season moves, combined with a strong draft pick, could help turn this team around, which makes the Raptors one of the more interesting teams to watch on draft night.

With the ninth pick, the Raptors may actually be able to address some of their most significant needs, most notably a wing who can create offense and play defense. They could also use an upgrade off of the bench at the point guard position in order to find a player that can reduce Jose Calderons minutes and possibly play alongside him as well. With the ninth pick, the Raptors have an opportunity to find a good fit for their offense and a player that can step up and contribute immediately. The biggest question mark moving forward will be whether or not theyll be able to retain Chris Bosh once he hits the free agent market next summer, but well likely have to wait a while for the answer to that.