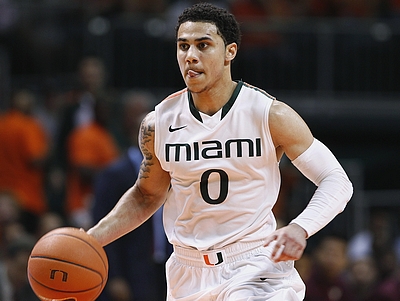 Jonathan Givony
@DraftExpress
The name on the back of the jersey means just as much as the name on the front here at DraftExpress, so if you're watching the tournament with an eye on scouting players who will eventually play in the NBA, you've come to the right place.

Shane Larkin is a major wildcard in this draft, as he seemingly came out of nowhere this season to establish himself as one of the best point guards in college basketball. Illinois' trapping pick and roll defense made life very difficult on Miami's half-court offense in the Round of 32, but it was his ballsy step-back 3-pointer with a minute to go that sealed the win and a Sweet 16 berth for the ACC champions. Larkin reportedly has his eye on the 2013 NBA draft and considering his lack of pedigree and how late he emerged on the scouting radar, these NCAA tournament games can be huge for him.

Marquette's leading scorer, Vander Blue, had perhaps the best NCAA Tournament weekend of any prospect, scoring 45 points in a pair of close wins, one of which came on a last-second shot drawn up by Buzz Williams. 6-4 and extremely athletic, Blue has struggled with his perimeter shooting for the past three years, but made five of his ten 3-point attempts last weekend, looking highly confident in doing so. NBA scouts will want to see whether he can continue to be a threat from the perimeter or if his hot shooting was simply a fluke. With another strong weekend, Blue could establish himself a legitimate first round prospect in the 2013 draft.

Few coaches in this tournament are more familiar with each other's coaching styles than Ohio State's Thad Matta and Arizona's Sean Miller. Miller was Matta's assistant at Xavier from 2001-2004, which helps explain why the two teams play such similar styles.

Ohio State power forward DeShaun Thomas opened the tournament with a huge weekend, scoring 46 total points in a highly efficient manner against Iona and Iowa State. He will likely see large doses of fellow second round draft prospect Solomon Hill, who should be able to match up well with him thanks to his strong frame and long wingspan. Arizona will need their senior leader to give them some scoring as well. Hill, Like Thomas, shot 5-7 from beyond the 3-point line in the first two games, and the Wildcats will need him to continue to be aggressive.

Aaron Craft showed a lot of confidence in waving off his teammates and stepping up to make the game-winning basket against Iowa State in the Round of 32. NBA scouts question his perimeter shooting (30% 3P) and overall scoring ability, so it was nice to see him step up and hit such an important shot. Ohio State will need his trademark lockdown defense to slow down Arizona's red-hot point guard, Mark Lyons, who scored 50 total points in the opening weekend on scintillating percentages.

This game might feature the best overall matchup of the weekend as far as NBA scouts are concerned, as Indiana's lockdown defender Victor Oladipo will likely get plenty of chances to put the clamps on highly touted Syracuse point guard Michael Carter-Williams.

Oladipo had a strong showing against Temple, doing a good job slowing down the red-hot Khalif Wyatt, and then making the go-ahead 3-pointer with 14 seconds left, essentially icing the game for Indiana. For someone that had only made 45 3-pointers in 98 career games going into last weekend, it was significant for him from a perception standpoint to confirm that his much-improved perimeter shooting ability is not a fluke in such an important moment, and he looked confident in stepping up to the plate and delivering.

Indiana will be looking for Cody Zeller to have a bounce-back performance after a very lackluster outing against Temple. The sophomore big man struggled to finish through contact against an unheralded frontcourt, turning the ball over repeatedly and showing the same lack of toughness that has concerned NBA scouts in the past. Syracuse's zone presents a unique challenge for big men like Zeller, so it will be interesting to see how Tom Crean has him attack it. Will he be the one to step into the middle of the zone and attack it with his tremendous skill-set?

Syracuse's James Southerland and Indiana's Christian Watford are not particularly athletic, physical or versatile prospects, but both seniors are experienced players with tremendous range and touch from beyond the arc, shooting over 40% respectively. If any team is to get an advantage, it might come here from their perimeter oriented power forwards, making this a matchup to look out for.

Backcourt play has been the key to La Salle advancing to the Sweet 16, especially that of South Carolina transfer Ramon Galloway, who has scored 64 points in their three games thus far. At 6-3, he's more of a combo than a point guard, and doesn't possess elite athletic ability, even if he's an excellent shooter and a very crafty overall scorer. He's surely helped his professional basketball prospects with his play thus far, and has an opportunity to continue to do so here.

Cleanthony Early was huge last weekend for Wichita State, scoring 37 points in just 52 minutes, particularly with his long range shooting against Gonzaga, where he made 4 of his 7 3s. Early is a bit undersized for a power forward at 6-8 but is a versatile offensive player, capable of scoring both inside and out. He gets to the free throw line at a great rate, is a strong offensive rebounder, and brings a lot of toughness defensively like all of Gregg Marshall's frontcourt players. Early had hit just 2 of his last 21 3-point attempts before the Gonzaga game, and has been prone to streakiness from beyond the arc all season. Outside of an 11 day stretch where he hit 14/23 3s at the beginning of January, and last Sunday's game, he's shooting 23% on the year from 3-point range. Which Cleanthony Early will show up this weekend?
Read Next...