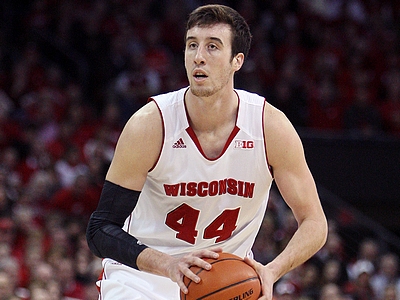 VanVleet in particular, has seen his usage rate on the pick and roll skyrocket in the NCAA Tournament. He's been responsible for an outrageous 24 points per game off derived offense from pick and rolls, up from 10.9 during the regular season. For comparison's sake, Chris Paul leads all NBA point guards in this stat at 20.3 per game. VanVleet has found a beautiful balance between scoring and distributing out of the pick and roll, which has made Wichita State extremely difficult to defend as Bill Self can probably attest.

Notre Dame has a terrific backcourt of their own, with one projected first round pick in Jerian Grant, one future first rounder in Demetrius Jackson, and Steve Vasturia, fresh off a 20-point outing against Butler. Grant's efficiency has waned in the ACC and NCAA Tournament, but Jackson has done a great job of stepping up and being assertive when defenses have keyed in on him. Grant, like VanVleet, is one of the most prolific pick and roll threats in the college game, which is extremely interesting considering his size.

Nice contrast in style here, between the slowest and fastest paced teams in the NCAA Tournament. Both are extremely efficient offensive teams (Wisconsin #1, UNC #12), but do it in vastly different ways. UNC with their trademark emphasis on getting out in transition, the secondary fast-break, crashing the offensive glass relentlessly, and shooting very few 3-pointers. Wisconsin on the other hand almost never turns the ball over, runs long and patient half-court sets, and is a fairly potent outside shooting team. They get out in transition less frequently than any team in college basketball according to Synergy Sports Technology.

The biggest question with Wisconsin is, how do you guard Frank Kaminsky, the most versatile and skilled big man in college basketball? Kennedy Meeks is questionable for this game due to a sprained ankle, and regardless, would have been a bad matchup due to his slow feet, average conditioning and lack of explosiveness. Carolina will miss Meeks' ability to carve out space in the low post and tremendous presence on the offensive glass. They may need to play a lighter and more dynamic style than the traditional two-post lineup they've seemingly always gone with, though, which typically struggles with spacing. Meeks' injury and foul trouble forced Roy Williams to experiment with smaller lineups and even a zone defense in the Round of 32, an interesting change of philosophy which many UNC fans have been clamoring for in recent years.

While sophomore big man Isaiah Hicks is a very limited offensive player and will likely never live up to his billing as a top-10 recruit, his length and athleticism could be UNC's best shot at potentially slowing Kaminsky down. UNC usually plays Hicks at power forward, despite his limited skill-set, and might need him to chase the extremely dangerous Nigel Hayes around the perimeter and deal with his devastating post-ups.

The matchup between Sam Dekker and Justin Jackson will be a pivotal one as well. Both Dekker and Jackson are in the midst of the best shooting stretches of their seasons, with Dekker making seven of his sixteen 3-point attempts in the Tournament and Jackson going 14/35 over his last 11 games after starting out the year ice-cold. Can Dekker continue to make shots as the pressure mounts this upcoming weekend? Even despite his hot weekend, he's still shooting 30% on the season from outside and 34% for his career. The difference between Dekker being a reliable shooter or not is probably what ultimately decides what kind of career he ends up having in the NBA.

The story of this game will likely revolve around Kentucky's ability to handle West Virginia's relentless full-court press. The Mountaineers pressed more often than any team in college basketball, and saw great results from doing so, forcing a turnover on 35% of those possessions according to Synergy Sports Technology. The Harrison twins, who play an average of 50 minutes combined per game, will be the ones tasked with shouldering much of the brunt of that, as Kentucky's oversized frontcourt of Trey Lyles, Karl Towns and Willie Cauley-Stein probably won't be asked to do too much ball-handling.

Andrew Harrison in particular will see a lot of fire coming his way. The sophomore has done a better job of keeping his mistakes under control, seeing his turnover rate drop from a very high 20.5% last year to a more-manageable (but still not ideal) 16.8% this season. Aaron Harrison almost never turns the ball over (7.5%), but he also doesn't handle the ball very much (11.5% assist rate) so it's not clear how much he's been tested. Kentucky may need to play Andrew Harrison and Tyler Ulis together a decent amount, more than the 30% of the time they share the court on average.

Kentucky's huge advantage, as always, will be inside the paint. Karl Towns has seen his usage rate with his back to the basket rise considerably as the season has moved on. He ranks 2nd in the NCAA Tournament in points scored in the post per-40 minutes (12.5) behind Jahlil Okafor (12.6), but only by a hair, showing how far along he's come as an offensive option. West Virginia only has so many bodies to throw at Kentucky, so things could get ugly if Devin Williams and Jonathan Holton pick up a couple of early fouls.

Freshman Devin Booker has been in a shooting slump as of late, only hitting 11 of his last 42 (26%) attempts from beyond the arc in the last 11 games. Considering how much of his draft stock relies on his ability to make shots from outside, scouts will want to see him revert back to the stone-cold killer he was from the perimeter earlier in the year. Despite his recent struggles, he's still scoring a point every two minutes on average, while shooting 43% from beyond the arc on the season. It's worth mentioning that he is also the youngest player seeing action in the NCAA Tournament by a decent margin, not turning 19 years old for another seven months.

Vegas was quick to anoint Arizona a double-digit favorite against Xavier, which is not surprising if you look at the talent disparity between the two squads. Xavier was able to score 151 points in total against 11-seed Ole Miss and 14-seed Georgia State on gaudy efficiency numbers (including 47% 3P%), but things will likely be very different against the third best defense in college basketball.

Projected lottery pick Stanley Johnson had his worst game of the year against Ohio State, hitting just 1/12 from the field for a season low four points. Still, the Los Angeles native is in the midst of an outstanding freshman season, and will look to bounce back in his hometown with plenty of local support in the crowd. Johnson has had an interesting debut campaign thus far, shooting the ball much more consistently than many projected (37% 3P%, three attempts per game), but struggling badly to finish efficiently around the rim in the half-court. Johnson is converting a dismal 45% of his shots around the basket, only slightly better than his stellar conversion rate on jump-shots (43.5%). While he's as physically mature and strong a freshman as you'll find, Johnson lacks a degree of explosiveness around the rim.

Senior point guard T.J. McConnell has been the most consistent player on Arizona's roster this season, and has been making a strong case for himself for consideration as utility third-string point guard in the Matthew Dellavedova mold. He's a career 38% 3-point shooter, sports a stellar 2.7/1 assist to turnover ratio, and is one of the toughest perimeter defenders in college basketball, as evidenced by his lockdown performance on freshman sensation D'Angelo Russell in the Round of 32. His credentials as a NBA prospect will be based on his winning pedigree, and not his upside, so taking his team as far as possible into the NCAA Tournament is extremely beneficial for his pro prospects.
Read Next...