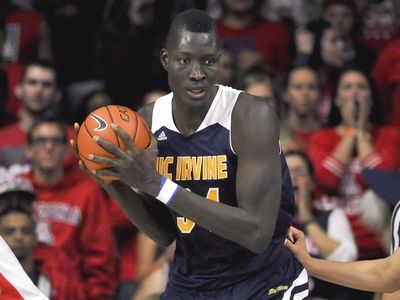 This has been a very up and down season for Kansas' entire stable of NBA prospects, to the point that it's really anyone's guess how things will play out this month. Kelly Oubre couldn't get off the bench for the first few weeks of the season, then showed exactly why he was deemed a sure-fire one and done lottery pick once he did. But the past six weeks have been a real rollercoaster ride, with plenty of ho-him performances that have raised question marks about his draft standing. Scouts will be very interested to see how he finishes out the year. Cliff Alexander underachieved and butted heads with Bill Self all season, and now looks to be finished at Kansas thanks to NCAA amateurism issues. Wayne Selden forgot how to score inside the arc, and Sviatoslav Mykhailiuk has been out of the rotation since Oubre awoke from hibernation.

A down year for Michigan State from a draft scouting standpoint resulted in a surprisingly Tournament seed. Denzel Valentine has been doing his best Khalif Wyatt impersonation all year carrying the Spartans on his back, while Branden Dawson remains essentially the same exact player he was when he arrived on campus.

Larry Nance vs Seth Tuttle should be a fascinating contrast of styles. Nance the freakish athlete with an emerging perimeter skill-set, against Tuttle, a super versatile power forward who plays entirely below the rim and struggles to guard any position effectively.

Juwan Staten is one of the best athletes in college basketball, and his health will be a huge factor in how close of a game this is. West Virginia's press relies heavily on his ability to get up on Buffalo's ball-handlers and wreak havoc in the passing lanes.

Another one of the highlights of the day. Many feel that Wichita State was wildly underseeded, while Indiana probably shouldn't have gotten in, let alone as a 10-seed. Yogi Ferrell against Fred VanVleet is one of the better point guard matchups you'll see on opening weekend, and Ron Baker versus James Blackmon should be extremely entertaining as well. Indiana will try to turn this game into a track meet. Troy Williams is one of the best athletes in college basketball, but his inability to make shots from the perimeter is holding back his draft stock.

This should be an interesting contrast in styles, as Belmont is a fast-paced team that shoots the ball extremely well from beyond the arc, while Virginia plays slow and absolutely stifles opponents with their defense. Justin Anderson will try to work his way back into form after struggling badly in the ACC Conference tournament, which is understandable considering how long he's been out for.

One of the highlights of the day will be 7-6 Mamadou Ndiaye's matchup with Louisville's frontcourt. How will Terry Rozier handle Irvine's zone and Ndiaye's length inside the paint? Will Montrezl Harrell be able to dominate the glass like he usually does? Can ultra-smooth British combo guard Luke Nelson create enough offensive efficiently against Louisville's zone to keep Irvine in the game?

The Jake Layman  Alec Peters matchup at power forward should be a very interesting one. Peters is one of the most efficient scorers in the country at that position, while Layman has superior athleticism and versatility. Both teams defend well, which could lead to a low-scoring outing.

Joseph Young is among the best scorers in college basketball, while Dillon Brooks had a very strong freshman season. LeBryan Nash never developed his perimeter game and has one last chance to show he can still reach the potential many saw in him in high school.

Good luck to the poor low-major 16 seed center (6-8 freshman Elijah Minnie) tasked with trying to slow down Jahlil Okafor inside the paint.

Sneaky good game here. Both teams play fast and score very efficiently, but in different ways. Davidson is one of the best outside shooting teams in the country, and also almost never turn the ball over, while Iowa crashes the offensive glass and gets to the free throw line. Aaron White is the best prospect in this game, and it will be interesting to see if he continues to extend his game out to the perimeter against a shaky Davidson defense. White has made 9 three-pointers in his last six games, which represents half his 3-point makes for the year and more than in his entire junior season. He is an impressive athlete, so if he can find a way to make perimeter shots it would be very easy to see him in a NBA uniform.

Big 12 player of the year Buddy Hield has his eyes on the NBA, which makes sense considering he turns 22 later this year. He has deep range on his jump-shot, but is very streaky from game to game, even if he's become a slightly more versatile player (particularly defensively) compared to last season.

Best of luck to 6-7 Tristan Curtis and 6-8 Marcus Freeman slowing down player of the year candidate Frank Kaminsky.

It will be interesting to see how 6-10 freshman Malik Pope fares against the undersized, but hyper active and athletic Sir'Dominic Pointer, who is one of the most versatile players in the country.

Gonzaga's starting big men, Karnowski and Wiltjer, are good offensive players who have struggled to get their draft stock off the ground (no pun intended) due to defensive concerns. They won't be able to do much to change that against a Summit League frontcourt.

Just like on Thursday, the last game on Friday might be the most entertaining of the day. Providence's point guard Kris Dunn has seen his draft stock rise as quickly as any college player this season. He has prototypical physical tools to go along with excellent court vision and decent scoring ability. Plenty of scouts will be watching to see how he performs when they stakes are highest.
Read Next...