Evaluating the Madness of the 2004 High School Class 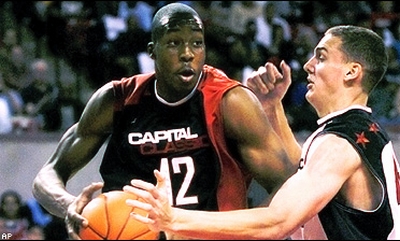 Jonathan Givony
@DraftExpress
The 2004 high school class was lauded for being one of the deepest and most talented of all-time when it entered the college ranks four years ago. Now that four years have passed and the dust has settled on the recruiting rankings, we take a look back to see how it really panned out. 37 players from the RSCI's top-100 recruiting rankings have already made it, with likely a half dozen or more still to come from this year's NCAA senior class.

The chart below is based on the RSCIs final rankings of the 2004 class. The RSCI, which stands for Recruiting Services Consensus Index, is a calculation of the average rankings of all of the major high school recruiting services. Its methodology is explained here.


*= Went to prep school, and thus not ranked by all, which lowered their average recruiting ranking, sometimes substantially.

Notes from a Crazy Class

-30 of the top 100-ranked players made the NBA, and 29 of them are still there. The only one who is not is Darius Washington, who had a cup of coffee with the Spurs in November and is now considered a lawful citizen of the Republic of Macedonia, allowing him to earn a mammoth salary in Greece. 11 of the top 12-ranked players made it, and 22 of the top 35. What that tells us is that despite certain players being ranked too high or too low, the recruiting services were for the most part highly accurate identifying the top talent. Other members of the top-25, like Malik Hairston, D.J. White, A.J. Price and DeMarcus Nelson might not have developed quite the way some envisioned, but still have a chance to make the NBA.

-7 other players are already in the NBA despite not being considered top 100 prospects out of high school: Patrick O'Bryant, Jeff Green, Sean Williams, Jason Smith, Dominic McGuire, Taurean Green and Ramon Sessions. Green was a top-5 pick, and OBryant top 10. What that goes to show you is that its never a good idea to put a ceiling on a players potential at the age of 17-18, because you never know how theyll develop.

-How much has the NBA draft landscape changed since David Stern instilled the 19-year old age limit? Consider that 8 of the top 19 players drafted in 2004 were high school players, and that only one player was subsequently one and done in Marvin Williams.

-Out of this years senior class, we still find some fantastic college players who were not highly regarded out of high school, for one reason or another, but have developed into legit NBA prospects, like: Roy Hibbert, Courtney Lee, Jason Thompson, Kyle Weaver, Joey Dorsey, Richard Roby, Chris Lofton, Jaycee Carroll, Pat Calathes, Aleks Maric, Will Daniels and others. Again, even though the recruiting services do a very good job with their scouting, there will still always be many players who improve considerably in college and leapfrog their more highly touted peers down the road. When it's all said and done, there will be over 40 players from this class in the NBA, which is pretty impressive.

-Moving down the list, we find LaMarcus Aldridge slightly underrated at #12, and some serious question marks in Joe Crawford, Darius Washington, Juan Palacios and Jawann McCllellan, all of whom had somewhat disappointing college careers and are in varying degrees extremely far from the NBA radar. Rajon Rondo, the starting PG of the Boston Celtics, ranked alongside Mike Williams, an anonymous college player who barely played at Texas before transferring to Cincinnati and being setback by injury, shows you just how much of a crap shoot things are in the recruiting business at times.

-J.R. Smith, a 5th year prep school player, at #23 would have been in the top 10 had he been ranked by HoopScoop. Other examples of players who are ranked too low for this reason (not being considered 2004 prospects by some services) include Dorell Wright, Andray Blatche, Nick Young and Jackie Butler.

-At #25, we find Corey Brewer, the most highly regarded player in Billy Donovans recruiting class, ahead of #47 Al Horford, #72 Joakim Noah, and unranked Taurean Green. This class went on to win two straight national championships before leaving for the NBA last year.

-Wondering why Kentucky has been such a disappointment over the past few years? Consider how little they got out of what was then considered arguably the top recruiting class in the nation, headlined by #10 Randolph Morris, #14 Joe Crawford, and #21 Rajon Rondo, who went pro after an underwhelming sophomore season.

-Kansas is in the national championship this year, thanks to heavy contributions from #31 Russell Robinson, #43 Sasha Kaun, and #68 Darnell Jackson. #67 Alex Galindo and #69 C.J. Giles transferred out of the program fairly quickly.

-20 of the 100 players listed here decided to transfer to another school at some point in their college careers, some of them multiple times. This usually stems from dissatisfaction with playing time, touches, or a coaching staff change. Many of the players just found out that they arent as good as they thought they were.

-We also find a number of very average college players scattered throughout the upper half of the list, for example: #28 Marquise Gray, #36 Josh Wright, #37 Greg Stiemsma, #40 Brian Johnson, #45 Jason Horton, #47 Marshall Brown, and #51 Justin Cersaolinone of whom averaged double-digit scoring this season.

-For those that think that being a top 100 high school recruit is a surefire sign of having a professional career in basketball (in the NBA or overseas), consider the cases of Marquie Cooke, Kalen Grimes, A.J. Ratliff or Albert Weberall of whom finished this season sitting at home, for one reason or another. Looking at how some of the players who transferred and still have a year of college eligibility have panned out so far (Alex Thompson, DeAaron Williams, DeSean White, etc), there will likely be a few joining them next season.
Read Next...